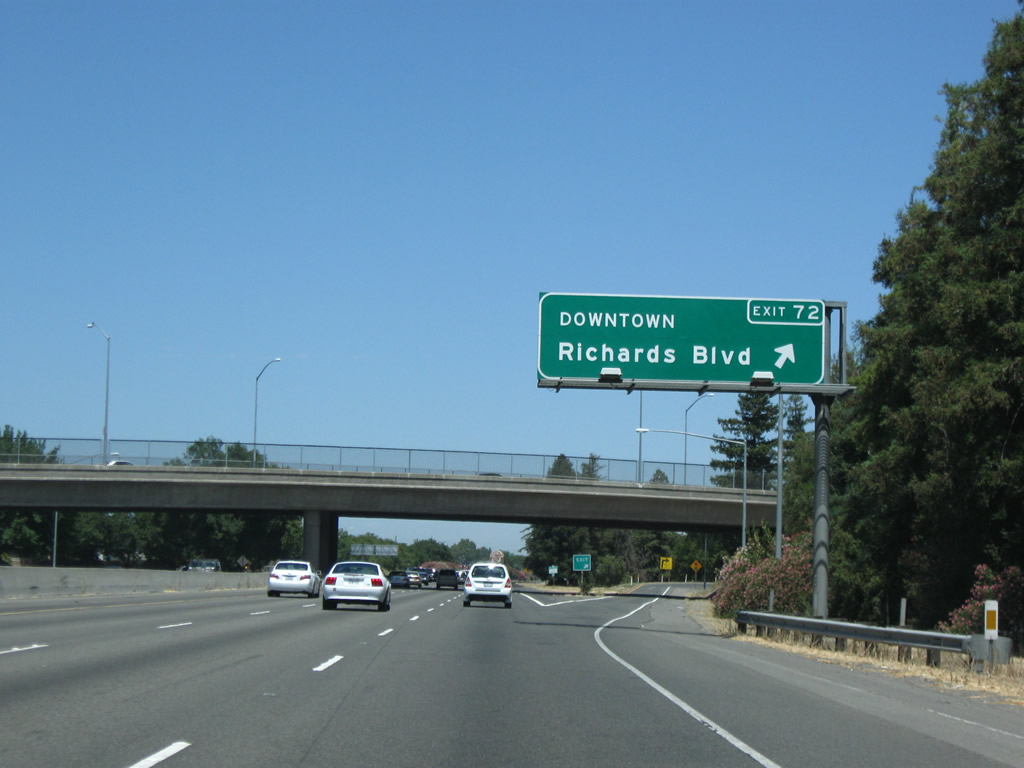 There are multiple problems with the Richards corridor in Davis.  The most notable is that the number of vehicles moving through the main south entrance to downtown is too large for the road capacity.  It is not just that the underpass has a single lane, but the surface streets in the south part of downtown Davis lack the ability to handle the volume of traffic at peak hours.

A second issue that is only partly related to the capacity issue is the problematic nature of the I-80 freeway interchange.  During peak hours, traffic exiting westbound I-80 backs up onto the freeway off-ramp due in part to the traffic jam on Richards Blvd.  But that situation is made worse by a mesh point that requires cars exiting the freeway to quickly merge – not only with motor vehicle traffic, but with pedestrians and bike paths.

During less congested hours, the mesh point is still equally problematic as cars are exiting the freeway and have to look over their shoulder to merge onto Richards Blvd while being wary of bikes and pedestrians and buses on the same route.

It is a problematic and dangerous situation and the city wants to change it.  The city and CalTrans have created a tight-diamond design that they believe will alleviate the safety concerns – however, this will not change the core problem of throughput.

But funding those changes have been a problem for quite some time now.  Originally the city was looking toward using RDA (Redevelopment Agency) money – but with the end of RDA, that has become a lost opportunity.

The city then looked toward the Nishi developers to fund part of the corridor plan, but that opportunity was lost when Nishi was voted down last June.

So now the city is pursuing a SACOG (Sacramento Area Council of Governments) grant as a way to fund the project, and it appears promising.  As Public Works Director Bob Clarke explained to the Vanguard in an email, “SACOG staff have indicated our project would likely be more competitive in next years’ grant cycle if we show our commitment by investing local funds towards environmental clearance/final design and can show that it is ready to go to construction as soon as possible after grant funds are awarded.”

But yesterday’s article generated concern.  The concern was that fixing the road, if it led to new development, was not optimal.  As one reader put it, “I don’t view a solution which includes drastic increases in automobile traffic as a ‘fix.'”

I see the two issues as separate and distinct.  On the one hand, the road right now is a problem.  It is a safety risk and, even if there were zero new development, the city would need to fix this.

On the other hand, the determination about development along the corridor needs to be considered separately from the decisions to improve throughput.

The key criteria for submitting this grant program include the reduced congestion, improved flow of traffic, increase in multi-modal travel options including bike and pedestrian improvements, improved long-term economic benefits, improved traffic operations at Davis’ primary entrance from the interstate, improved access to Davis from I-80 at Richards, and improved safety which includes the separation of freeway traffic merges from Olive Drive intersection and a separate bike corridor.

He noted that“special consideration is also given to projects that have already funded initial phases with local resources.”

Specifically, he said, “SACOG doesn’t necessarily look to facilitate development, but does consider development the local agency is already considering, or has recently approved to ensure the transportation improvement works cohesively with other local decision-making that is compatible with the overall SACOG Blueprint.”

He said, “To that end, the proposed developments along the Richards and Olive corridors would be relevant in that the interchange project is compatible and coordinated with them.”

But, while they are relevant, they are not a requirement for the grant funding.  In other words, Davis doesn’t have to develop any of the properties along the corridor in order to receive the funding.

The bottom line, as Bob Clarke put it, is that “the I-80/Richards interchange is the main public entrance to the City and its current design is outdated and no longer functions well to transition travelers from the freeway onto our local streets, nor is the Richards corridor ideally designed for the safe travel of peds, cyclists, transit riders, or motorists based on current complete streets principles. “

He said, “For these reasons, and if the City funds all the environmental and design work locally, it would be a very competitive project for grant funding in the next cycle.  That does not guarantee it will be successful, just that we will have positioned the project as favorably as possible for funding.”

I understand that there are those who oppose development along the corridor – but should we not try to improve the safety of the freeway interchange because in the future it might make it easier to develop Nishi or Lincoln40?

That, once again, seems like backward thinking and the type of thinking that has led to paralysis in this community for too long.

61 thoughts on “Commentary: Don’t Fix the Road because It Might Lead to Development”