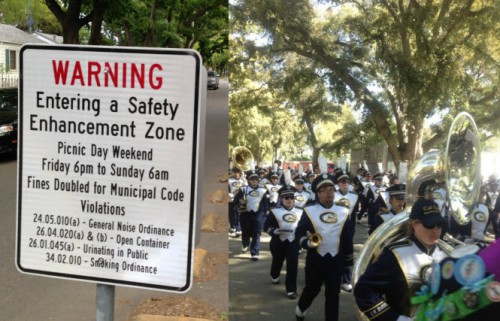 I have heard and read the calls for changes to Picnic Day in light of some well-publicized incidents.  But some of those proposals are not within our realm of control.  And some are impractical and/or not lawful.

Do we ban concerts because a suicide bomber killed people in England?  Do we ban nightclubs because of what happened in Orlando?

I am not saying don’t take reasonable steps to improve the situation, but often the response I have seen is knee-jerk extremism – ban alcohol, suspend Picnic Day.  Even if we could do those things, the question remains as to whether we should.

The reality is that, while the city has taken steps to crack down on drinking, through the creation of safety enhancement zones and double fines, students will drink, out-of-towners will come into town for a party, and occasionally things will get out of hand.

But before we react to highly-publicized incidents, I think it’s important to have actual data to evaluate the situation.  Otherwise we may risk overreacting to outliers.

From my discussions with various officials, Picnic Day was actually fairly calm this year, outside of some of those publicized situations.  I won’t claim that drinking and those incidents had nothing to do with Picnic Day, but I think perspective is in order.

Here are a few of my thoughts.

First, after the problems at Picnic Day back in 2010 forced the city and university to consider cancellation, the city the next year created the Safety Enhancement Zone and deployed a lot of police officers from across the state to give them back up.

The result was a fairly calm 2011 Picnic Day – with a notable tragedy, but with throngs of police hanging around on the corners of the streets, overreacting to minor situations, and often being bored.

Over time, the out-of-town police numbers have dwindled, and the other problem is that cracking down on the bars and downtown restaurants did what we expected – pushed the parties out of the downtown and into frat houses and neighborhoods, where they are more spread out and more difficult to control.

Second, we have heard claims that the police incident on Picnic Day was alcohol-fueled.  We have received word that there have been arrest warrants issued for three more of the participants in that incident.  But there are disputing accounts as to whether alcohol was actually a driving force in that incident.

I think it would be helpful to get toxicology reports on the blood alcohol level of the individuals involved before drawing the conclusion that the incident was due to public drunkenness of the individuals.  We shall see.

The video that we have seen shows that, while the crowd was large and spilling into the street, it did not become combative or belligerent until the arrival of the police van and the U-turn into the crowd.  More video could be used to shed light on what happened, but that may wait until the criminal case proceeds.

Third, regardless of the specifics of what happened with the police incident, the question of what we can do or what we should do remains.

The city council cannot suspend Picnic Day.  Given a whole host of factors, the university really has no interest or incentive to do so.  While the university has managed to quash reports of a shooting on campus, for the most part, problems that occurred were off-campus.

The city cannot make the city a dry city during Picnic Day.  The city can ban the sale of alcohol but what good would that effectively do?  Students can stock up on alcohol in advance.  And there would be little to stop people from going out of town, buying alcohol and coming back to town.

My thoughts remain similar to what they were a few weeks ago – instead of fighting the party, why don’t we embrace the parties, but encourage them in open public spaces rather than pushing them into neighborhoods?

One idea would be to block off a portion of Russell and simply allow students to party in the open under secured conditions.

In the meantime, I do think the city officials and police should engage once again with student leadership and the fraternities to find ways to contain parties and secure them.  But, for the most part, I think we have done what we can do with laws.  What we have to work on is communication and engagement – what tends to happen after incidents like 2010 is that people become vigilant at first, and then complacent.  Plus the students from 2010 have long since moved on – most students on campus now have no memories from 2010 and therefore history has been forgotten by many of the students on campus.

Finally, no one perhaps will like this answer, but the bottom line might be if you have 100,000 people coming into the city on a given day, and young people drinking, maybe a few incidents are just always going to happen and all we should do is take steps to minimize the severity of those incidents and accept that there will be noisy and drunk young people in our city and we can’t really stop that from happening.

Take reasonable steps to minimize those incidents, work with the student leadership and fraternities, maybe open up some public space to force the partying more into the open and away from neighborhoods, but at the end of the day, accept that in a free and open society, we cannot stop every bad thing from happening.

26 thoughts on “Commentary: Does Picnic Day Need to Be Reined In?”