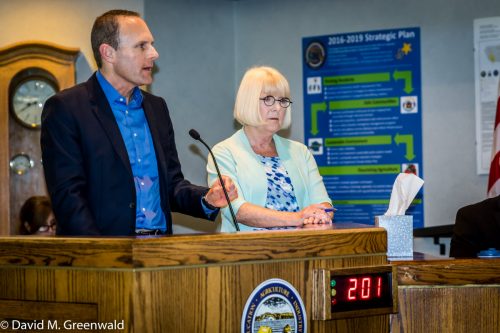 With the Board of Supervisors’ 5-0 vote to support a 100/50 on-campus housing commitment from UC Davis, the county has now joined the city of Davis and two student government bodies (ASUCD and GSA) in pushing the university to go beyond their commitment of providing 90 percent of new student enrollment growth and 40 percent of the student body overall with on-campus housing.

While the university has not committed to going beyond either figure – they are showing some cracks and some willingness to consider it.

In their released statement and RFP (Request for Proposals), the university has now stated that there will be no building height restrictions for either project and they have encouraged developers to submit proposals that exceed the RFP target housing numbers if financially feasible.

On Tuesday, while Marj Dickinson was defensive of the past history, arguing that the 1989 MOU was “met and slightly exceeded” in the goal of overall housing, even then it appears that they met those goals using a bit of a sliding scale.

However, Matt Dulcich told the board, “There are different options that are flexible as we seek to address a bigger number. We are trying to refine that to get beyond 90 to 100 percent,” he said.  “If we make that change, we wouldn’t consider it an equal weight alternative, it would become part of the project.”

He pointed out that getting to 50 percent overall would mean that they would be addressing not 100 percent of their growth “but more like 150 percent of our growth.”  He said, they are “open to considering it.”

All of this sounds good and it certainly demonstrates that UC Davis is probably starting to recognize the reality of the situation.  Their enrollment policies are already impacting Davis with a 0.2 percent vacancy rate and now threaten to impact neighboring communities as well.

But if UC Davis is serious about going beyond the 40 percent of new student enrollment on campus, they need to explicitly put it into the EIR and the LRDP.  Instead, it was implied that they had some fudge factors on the EIR.

Generally speaking, however, the only way that UC Davis could exceed their housing projection would be to have a new EIR.

“Up to 40 percent” means a cap or a target rather than a floor for new housing.

UC Davis could simply hedge their bets by creating the 100/50 option as an equal-weight EIR.  That is what the county is actually proposing in their resolution.  If they simply evaluate the 100/50 option, then if they want to exceed 90/40, they are covered.  They won’t have to do a new EIR.  There won’t be legal challenges.

This is the disappointing aspect of the university position.  Instead of evaluating possible alternatives, they have simply hinted that they could go higher without committing to do so.

We can read into this a number of negative interpretations.  With political pressure mounting, they might be attempting to alleviate the pressure by a wink and nod approach.  They are in effect saying – hey, we understand your concerns, they are valid, and we will see what we can do.

But they are not committing to a different path.  In fact, if they do not put this into the EIR, they are effectively precluding it.  Matt Dulcich confirmed the number that we had been speculating on.  The difference between 40 percent and 50 percent of students housed on campus is 3900.

There is no way you can exceed your EIR by more than 50 percent going from 6200 beds to 10,000-plus beds without having a new EIR.

In effect, UC Davis appears to be attempting to alleviate the political pressure without committing to a new course of action.

Will the new housing come on line on time?  That seems questionable at best.  We believe that it is more realistic to project an opening of 2021 or even 2022.  What that means is that there will be 3000 additional students with no new university housing projected for four or five years.

Think about that, the students who enter this fall will be graduated by the time the new housing likely will come on line.  With a 0.2 percent vacancy rate in Davis, where are those students projected to live?

Either doubled and tripled up in rooms in Davis or commuting from nearby communities, apparently.

No wonder Davis will be looking at doing its own analysis of the environmental impacts of UC Davis’ housing policies and no wonder Davis and now the Board of Supervisors have all now weighed in, pushing UC Davis to do more.

The reality is that we are all in this boat together and what UC Davis chooses to do will have serious impacts, not just on their own students, but on the Davis community and Yolo County.

Supervisor Provenza said that the reason he brought this was “concern for the impacts of communities in Yolo County.”  He said that in Davis, the lack of housing “really creates a situation where people can’t afford to live there.  Where if they do live there, they are quadrupled up in very small apartments.

“It’s a very desperate housing situation,” he said.  “Where students are being pushed further and further from campus.”

“The actual college experience for students in our community needs to be a positive one,” Supervisor Don Saylor stated.  “I have numerous interactions with students and there are some significant challenges that they’re facing.”

He added that “some students can’t afford the prices.  We’ve got people who are coming here with their whole communities raising money every quarter – they just can’t afford this.  We’re pricing some people out of the opportunity to have a university education.”

UC Davis needs to figure out ways to do more.  Marj Dickinson recognized that there is a housing crisis in Davis, and while we agree it did not happen overnight and will not be solved overnight, UC Davis can and needs to at least put into the plan that they can go up to 50 percent on-campus housing.

That is what almost every other UC is doing in the state and what needs to happen here in Davis.