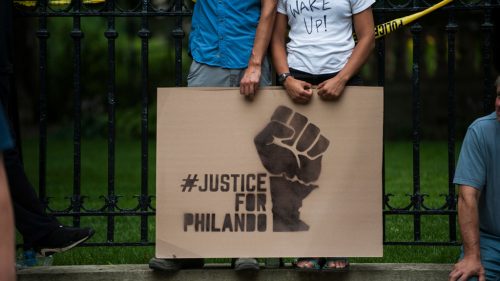 Last Sunday, in our piece, “We Need to Acknowledge that Race Played a Fundamental Role in the Picnic Day Incident,” I made the argument that people of color in our community and elsewhere have an experience with police that does not match mine.

I went so far as to say that their experience is fundamentally and quantitatively different from mine.

In the wake of some high profile acquittals of officers for killing black men, that view is only sharpened this week.  Nothing captures this sentiment better than the essay by Elie Mystal in Above the Law.

This is reminiscent of stories I hear from well-educated and fairly well-to-do black men in our community, who nevertheless have experienced racial profiling and other forms of indignation by the police.  The story of Eli Davis comes to mind – this was a soft-spoken, private man, moved to uncharacteristically write a letter to the editor after being questioned, while mowing his lawn in his front yard, by a police officer.

For Elie Mystal, who describes himself as an “extremely well-educated black man,” “affable,” “cautious,” a “family man,” “well spoken” and “clean,” writes, “I am, at least externally, exactly the kind of black man the white man has told me to be.”

And yet, he concludes, “I am not safe from the white man’s police. I know that any police officer can murder me in the street, for any reason or for no reason at all. I know this, intellectually.”

Mr. Mystal writes: “The psychic walls are fragile. I might come online and rage about the unnecessary murder of Eric Garner, but I’ll never go to Staten Island, much less try to make a buck while I’m there. I’m old enough to remember Sean Bell, but I’m wise enough to never reach in my pockets when I am in shooting range of the NYPD. I can see the Walter Scott trial as one of the greatest miscarriages of justice in American history, but I know that instead of running from Michael Slager I’d need to step-and-fetch like a f**king minstrel if I wanted to stay alive.”

He notes that he, as the media and white society do, ends up blaming the victim when black people are killed by police.  He writes, “I distinguish myself from the victims. I tell myself that I am not like these victims, I would not do what these victims did, and thus, somehow, I will be safe.”

However, for him, “Philando Castile broke the fragile, hypocritical narrative I tell myself to function in this world. Philando Castile also knew all the rules. The media has made a big deal of how

many times he was stopped; I noted that you cannot survive so many encounters with police harassment without knowing exactly what to do when they come from you. Castile, by all accounts, was also a nice, affable man. He was also a family man. THERE WAS A BABY IN THE BACKSEAT OF HIS CAR, much like my kids are often in the back of my car when I need to drive around a white neighborhood.

“None of it mattered. They shot him anyway. On tape.”

“There is NOTHING a black man can do to survive an encounter with American police. Once the police stop you, your black life is theirs. They can take it from you, or give it back to you, but you are a FOOL if you think you have any say in the matter. It might be comforting, for white people especially, to think that the terrorists who work on their behalf have some kind of ‘code’ or ‘protocol’ under which it is possible for a well-behaving black man to survive. But that is a fiction. There is nothing the victim can do to save himself. Maybe you get lucky and you get one of the non-murderous cops. Maybe you don’t. But as the victim, you don’t get a choice of your persecutor,” he writes.

He relates a story: “The weekend after Castile was gunned down, last summer, I had a need to attend a party in Greenwich, Connecticut. I loaded my whole family in my car. I was terrified. I drove like I was looking out of an ambush, like IEDs dotted I-95.

“Near my destination, I missed a stop sign. I never miss stop signs; with my kids in the car, I always come to a complete stop. But I was so on the lookout for my predators that I missed this basic rule of the road. After I realized my mistake, I cursed myself, knowing that for all my cautiousness, it would be the missed stop sign that triggered the stop that could potentially result in my death. I live in a world where missing a freaking stop sign could be a death sentence.

“Then I remembered that I also live in a world where missing a stop sign could be a death sentence because I could be HIT BY ANOTHER CAR. Ain’t that a bitch? I was so worried about ‘the cops’ that I risked my small children getting t-boned because Daddy was distracted.

“Car accidents happen every day, but you are unlikely to be in one. Cops can kill any black man they want, but you are unlikely to be the one they kill. I can’t argue, I can’t defend myself, I can’t hope for the justice system to protect me. All I can do is throw myself upon the mercy of large numbers and hope that I make it home safely,” he writes.

“I realized then, and it was confirmed when the cop who murdered Castile walked free, that I was thinking about my powerlessness all wrong. I considered myself the driver, trying to follow the rules of the road to avoid car accidents,” he says.  “That was an error. That was giving the white-dominated justice system too much credit. In this country, I am a coon, trying to scurry across the road.”

Mr. Mystal concludes: “Black people in America are treated no better than roadkill. The rules are not there to protect us. Nobody is held accountable for our deaths. And if a white person drives by the rotting carcass of our hopes and dreams, the best we can hope for is for them to say, ‘Aww, so sad.’ They’ll take no action to make the roads safer; most of them won’t even slow down enough to avoid running over our dead bodies.

Remember, this is a well-educated man writing this.  He knows the rules and how to engage.  And he’s clearly scared.  Then again, he should be.

Share:
Tags:Philando CastilePolice Shootings
Previous : Jeff Sessions Wants a New War on Drugs – It Won’t Work
Next : My View: Why Whole Foods Purchase Matters to Davis and How Amazon is Exacerbating the Death of Local Retail