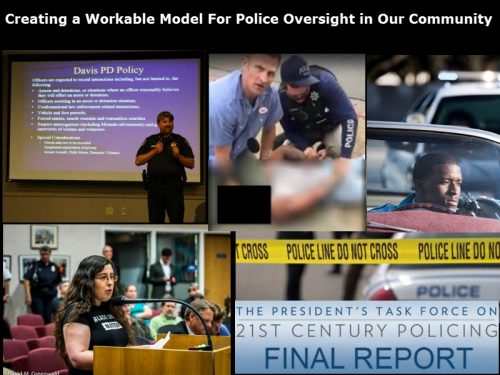 It is a new era for the Vanguard as we have launched monthly discussions at Sophia’s and weekly video “tri-casts,” starting to push more heavily into the video and podcast arena.

The Vanguard Conclave was a lively exchange Wednesday night.  We had a good audience at Sophia’s to listen to Nora Oldwin, Aaron Zisser and Chief Darren Pytel talk about police oversight.  We broadcasted it on Facebook live where the feed has now received nearly 500 views and reached 1700 people.

It is important for people to separate the issue of police oversight from what happened at Picnic Day.  The two are separate processes that end up being associated with each other due to proximity in time.  The police auditor let people know in February and March that he was leaving.  The Picnic Day event occurred on April 22.

The two are related in that the departure of the auditor, Bob Aaronson, who has served in that role since 2006, played a factor in the city’s decision to hire John McGinness as the independent investigator.  When that decision blew up in their face, the city slowed down the process before hiring McGregor Scott this week.

McGregor Scott, according to Chief Pytel, started working on Wednesday, so that process is underway.

That is separate from the issue of what Davis Police Oversight ought to look like.  For his part, Chief Pytel said he supports police oversight, that it was placed in the strategic plan for the police department and supported by every single police officer in the department.

The one real point that he made during his talk is he believes that, ultimately, decisions on discipline have to come from the chief, as he believes that he faces personal liability when officers act inappropriately.

During the lead up to the discussion, there was a behind the scenes debate over whether the police chief should be part of the panel – where some people felt that his presence would deter people, particularly people of color, from participation.  And I am certain that some people did not come to the discussion for that very reason.

However, I believe his participation was the right thing to do.

I made this point Wednesday night because a number of people felt that having the police chief there would be a deterrent to a more open discussion.  I just don’t agree, and felt that his presence

gave us a chance to understand his views on oversight and also allowed the public to ask tough questions.

But also, back in 2006, the chief at that time, Jim Hyde, cut off communications with critical members of the public.  Darren Pytel, whatever you think of him, was willing to come to what he figured would be a hostile audience – and it was – and stood up there and answered tough questions, such as he could.

I may not agree with everything that the chief says or believes, but I appreciate the fact that he has kept his lines of communication open.  In 2006, an incident and push for oversight led to the resignation of the chief and the shutting down of the Human Relations Commission.  I think this is important to keep the conversation going.

And there were tough questions about racism in the police department, that the police chief attempted to address.  He differentiated between explicit bias – for which he basically said the only remedy is removing that person from being a police officer – and implicit bias which is more difficult to track.  He argued everyone has bias – which the research certainly supports.

I had to step in and intervene when the questions got too pointed about Picnic Day.  Unfortunately, this could not be a conversation on Picnic Day.  The city hired McGregor Scott to review that incident and we need to let that play out.  There is also a criminal process underway that will go through the courts.

But on July 11 the council has to make a decision on police oversight and that was really the discussion we were looking for.

In a way, I was glad to see the heated questions.  I think there is some question as to whether or not the community as a whole is engaged on this issue, and the pushback demonstrates the level of frustration in some sectors.  And when I intervened, I got some of it as well – which I appreciated, because it illustrates my point that there are a number of people more to the extreme than me on this issue.

Finally, part of the question that arose during the panel’s discussion is what the police oversight should look like.  We did not discuss heavily the issue of whether it should be an auditor/investigator or a board.

As we have previously noted, the four-part recommendation from the Human Relations Commission (of which I am a part) was to call for the city:

One of the points that Aaron Zisser raised is that there is often a lot of focus on specific incidents – and that is natural and probably unavoidable.  However, another area where oversight probably should focus is on patterns and practices.

This is the question as to whether an agency has engaged in serious patterns and practices of excessive force, biased policing and other unconstitutional practices.

At question is whether the police department has engaged in a pattern or practice of stops, searches, or arrests that violate the Fourth Amendment; use of excessive force; discriminatory policing; violation of the constitutional rights of criminal suspects; or violation of First Amendment rights.

Clearly, you still have to focus energy on investigating incidents like Picnic Day, but looking at patterns and practices is helpful toward changing the conduct of the entire police department, if those patterns are out of line with community values and the Constitution.