New research by Climate Central has given a bleak projection for the future of California, which it estimates will be pushed into a completely different climatic zone due to the effects of global warming. While San Francisco and Los Angeles will endure the most extreme impacts, significant changes will be felt closer to home, as Sacramento is estimated to shift toward a climate more apt for the American Southwest. In fact, the whole California Central Valley will adopt a climate which mirrors the current weather conditions of Tucson, Arizona, by 2100.  As Inside Climate News states, “According to the research, U.S. cities could be up to 12 degrees Fahrenheit hotter than they are today by 2100. St. Paul, Minnesota could feel like Dallas, Texas. Las Vegas could feel like places in Saudi Arabia, with average temperatures of 111 degrees Fahrenheit. Phoenix could feel like Kuwait City, one of the hottest cities in the world, with average temperatures of 114 degrees Fahrenheit.” 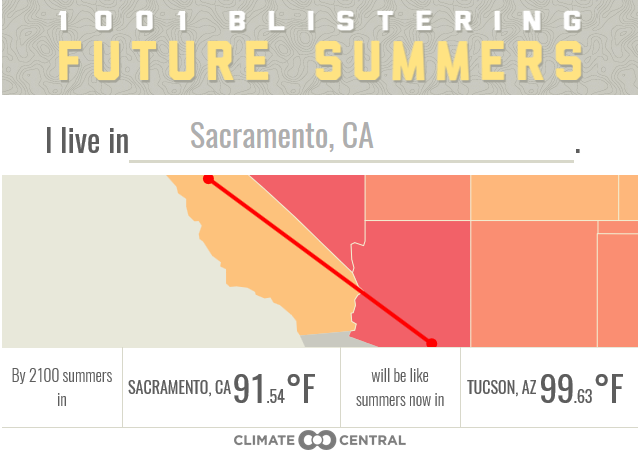 The California Coast will witness entire land masses disappear into submerged waters. This NCCS (Northern California Coast Survey)’s topographical map of the San Francisco Archipelago reflects the new coastline resulting from the unexpectedly rapid disintegration of the East Antarctic ice sheet and sea levels finally hitting the 200′ mark (via spatialities.com). Peninsulas are set to become islands, as gravity and oceanic flow will push rising waters inland, turning lowlands into giant lakes.  These maps are the latest glimpse into the dystopian future that awaits us if global emissions continue without human intervention. 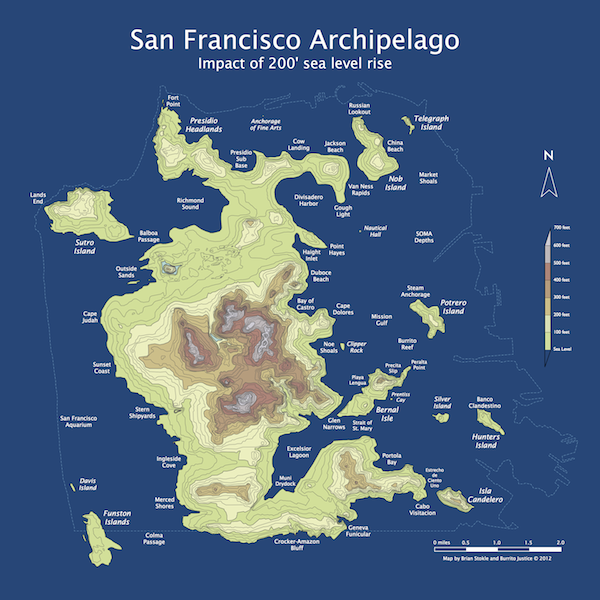 Cities all across California are expected to see an alarming increase in storm intensity, an increase in dry periods and drought, and less overall snowpack. This translates into numerous dire repercussions, including the loss of native fish species, increase in wildfires, and increased air pollution.

While the post-icecap future will undoubtedly shift previously longstanding geography on Earth, it is important to note that these projections represent what the nation will look like in 2100 if current emission trends continue. Unfortunately, the path we are on does not lead scientists to believe that the reality will differ much from their estimations, given widespread apathy and lack of intervention.  This emerging data is made ever more hard to swallow in the recent aftermath of Donald Trump’s withdrawal of the US from the Paris Climate Agreement.