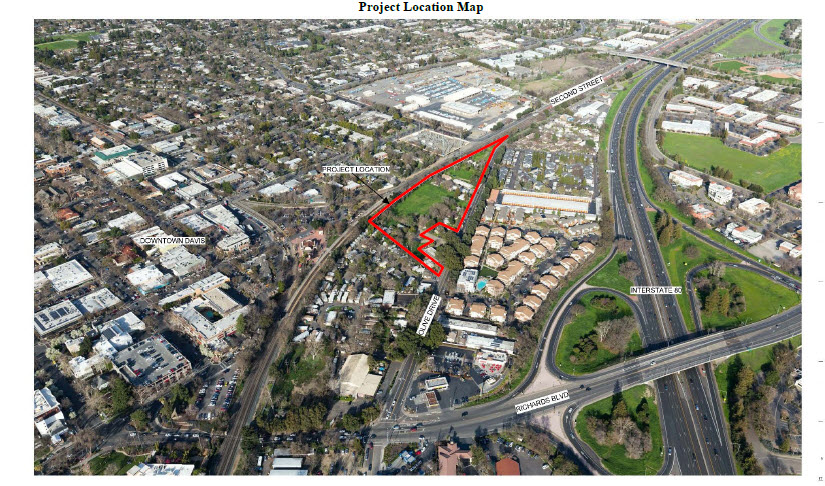 The city has released the Draft EIR for the Lincoln40 apartment project on Olive Drive.  The comment period will be open until August 2.

The project proposed for Olive Drive is an infill project that would demolish existing apartments and ten single-family homes to build a nearly 250,000-square-foot multi-family residential apartment building that will be five stories high with a maximum height of 60 feet.

The proposed project would include a total of 130 rental units and will be designed specifically as off-campus student housing.  The project is expected to add 708 bedrooms and provide student housing in a market that currently has a 0.2 percent vacancy rate according to 2015 and 2016 UC Davis Housing Studies.

“An EIR is required to identify the environmentally superior alternative from among the range of reasonable alternatives that are evaluated,” the consultants write.

In addition, they write that “the Existing Gateway/Olive Drive Specific Plan Alternative would reduce the majority of significant impacts identified for the proposed project compared to the remaining project alternatives.”

They find that the Aggressive Transportation and Parking Demand Alternative would “more clearly result in reduced on-site disturbance area” and conclude that it would be the environmentally superior alternative to the proposed project.

The EIR notes that there are areas of controversy identified in the Notice of Preparation (NOP) comments from September 15.  These include: impeding natural views, air quality, open space retention, affordable housing, removal of trees, impact on cork oaks, impact on multimodal travel demand, as well as connectivity issues between the project and Downtown Davis.

One of the big issues is expected to be traffic impacts from the project.  The traffic study looked at several areas including the Richards Boulevard and Olive Drive intersection and the I-80 westbound and eastbound ramps.

The EIR notes: “Vehicle turning movement counts were collected at the study intersections in May 2016, during the AM peak period (7 AM to 9 AM) and PM peak period (4 PM to 6 PM), when schools, including UC Davis, were in session.” 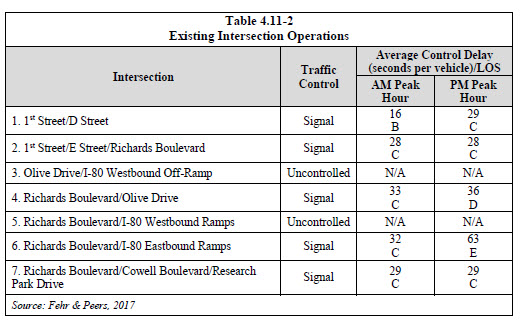 The EIR notes, “The Gateway/Olive Drive Specific Plan was amended in 2016 as part of the Nishi Gateway planning entitlements. Although the Nishi development was denied by the voters in June 2016, the amendments to the Specific Plan continue to be in effect.”

The Davis General Plan “calls for widening and capacity and safety improvements to the Richards Boulevard corridor and underpass. The improvements are necessary for the roadway to operate at acceptable levels of service.”

They note, “Richards Boulevard shall be improved to accommodate vehicular, pedestrian and bicycle traffic consistent with the Davis General Plan and the ultimate final design determined through the Richards Corridor EIR process.”

They further note, “All improvements to the intersection of Richards Boulevard and Olive Drive shall recognize the importance of the intersection as a gateway to Davis. Use of paver materials and extensive use of landscaping shall be a high priority.”

There are also safety concerns and there is a plan at this point to close the Olive Drive off-ramp.  “City staff and Safety Advisory Commission shall identify applicable traffic calming measures to slow traffic exiting I-80…  The Olive Drive corridor needs to be reviewed immediately and traffic calming implemented.”

Fehr & Peers found that the impact of the existing condition plus the project on peak hour intersections is “less than significant.”  They write, “While the LOS grade does not change, additional delay occurs at Richards Boulevard/Olive Drive during the PM peak hour, which operates at LOS D, generally due to the increase in westbound vehicle and bicycle traffic. 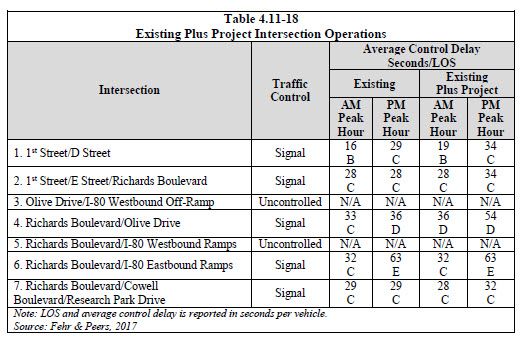 The full draft EIR is available at http://cityofdavis.org/city-hall/community-development-and-sustainability/test-development-projects/lincoln-40-apartments.