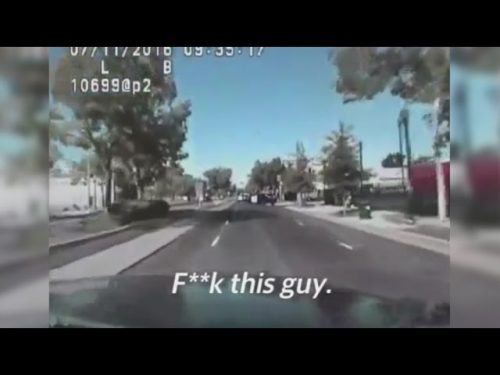 Last week, Officer Jeronimo Yanez was acquitted in the shooting death of Philando Castile.  However, no sooner had the jury acquitted him on criminal charges when the police department terminated his contract.

That scenario is becoming a familiar one.  Last summer in Sacramento, a dash cam video showed officers in pursuit of Joseph Mann, attempting to hit the African American with their vehicle before they got out and engaged in a brief foot pursuit and then opened fire.

However, the Sacramento DA’s office ruled that the two Sacramento police officers acted lawfully.  Now nearly five months after the decision not to charge Officer John Tennis criminally, he has been fired from the department.

The decision follows a nearly yearlong investigation into the incident.  The Sacramento Bee, which broke the story, reports, “It is unclear if the move is directly tied to the shooting.”

The Bee reports that the move to fire Mr. Tennis “may have resulted from the department’s internal affairs investigation into the Mann shooting” and that “Internal affairs is investigating if (Officer) Tennis and (Officer Randy) Lozoya violated department policies and procedures or training standards.”

Initial reports last August also called into question whether Mr. Tennis should have been a police officer in the first place.

A June 4, 2012, letter from Sam Somers, Deputy Chief from the Office of Operations, to El Dorado County Superior Court Judge Kenneth Melikian stated, “On May 23, 2012, a temporary restraining order (Case FL2012-0419) was granted, identifying Sacramento Police Officer John C. Tennis as the restrained party. Pursuant to the temporary order, Officer Tennis cannot possess a firearm or ammunition. The ability to possess a firearm is a condition of continued employment for a sworn Police Officer with the Sacramento Police Department. The Sacramento Police Department is unable to re-assign Officer Tennis to another position where a firearm is unnecessary.”

The restraining order describes a 2012 incident in which Mr. Tennis was having a verbal dispute with his wife in front of their children.  She described that “he was speaking ill of me to and around the girls using a great deal of profanity.”  At this point she went upstairs and he “threw a full baby bottle narrowly missing (their daughter).”

She detailed “verbal and emotional abuse” that had occurred against the children “through name calling and extensive use of profanity.” She claimed he was “investigated twice by CPS for physical

abuse” against two of their sons.  In one case, he grabbed the boy “by his neck and pushed him to the ground.”  “Once on the ground, John began yelling and cussing” at the child.  He left a red mark on the side of his neck.

Officer Tennis was suspended for 40 hours in June of 2014 for alcohol abuse and ordered to read several books, acknowledge “this conduct was a violation of City policy and Police Department General Orders,” and meet with a Drug and Alcohol Officer at the SFPD Behavioral Sciences Unit.

Criminal charges have proven difficult to sustain as we saw last week, not only in the acquittal of Officer Yanez but in several other cases as well.  The jury was unable to reach a decision in the shooting death of Sam DuBose in Ohio.

It is difficult to prosecute police officers for murder or manslaughter.  Professor Philip Stinson of Bowling Green State University in Ohio has done a research study that shows that, while there are roughly 1000 fatal police shootings each year, since 2005 when he began keeping records just 80 officers have been arrested for fatal on-duty shootings, and only 28 were convicted.

That equates to 35 percent – which is actually a much higher percentage than we would have thought.

Still, the other news yesterday is intriguing.  Three Chicago police officers were indicted in the death of Laquan McDonald – not for the actual murder, but for allegedly covering up shooting details.

The Chicago Tribune reports, “In a move some lawyers called unprecedented, the special prosecutor appointed to look into how police handled the probe into the McDonald shooting announced that three veteran officers were indicted on felony charges alleging they conspired to cover up the details of the death to protect Van Dyke.”

Special Prosecutor Patricia Brown said at a press conference that “the three officers lied to keep the truth from independent criminal investigators.

“The indictment makes clear that it is unacceptable to obey an unofficial code of silence,” Ms. Holmes said.

However, “The indictment stopped short of criminally charging department higher-ups in the alleged cover-up even though several had been recommended for firing by the city inspector general’s office for their actions.”

This is intriguing in part because it targets the code of silence that surrounds police departments.  It also avoids the question about murder, which often gets into a judgment call by the jury as to whether the officer legitimately feared for his or her life.

In Sacramento, the firing of Mr. Tennis was greeted by activists as a sign of progress.

Nevertheless, the decision not to charge the officers here was a decision that leaders questioned.  In January, Assemblymember McCarty released a statement, “Like many Sacramentans who saw the video, I question the conclusion by the D.A. that police acted within reason in the shooting and killing of Joseph Mann.”

Mayor Darrell Steinberg added, “I have enormous respect for the men and women of the Sacramento Police Department, but what unfolded with Joseph Mann is extremely tragic, unacceptable, and we are reminded of that again today with the district attorney’s decision.”

Vanguard Monthly Conclave: Creating a Workable Model For Police Oversight in Our Community

The Vanguard Monthly Conclave in June features a pertinent discussion on police oversight – what we are doing now, what models are available, and why we need it.

Event will be held at Sophia’s Thai Kitchen in the patio
Doors open at 6 pm, event starts at 6:30
Admission is free but there is a suggested sliding scale $15 to $50 donation
A portion of the proceeds at the bar will go to the Vanguard