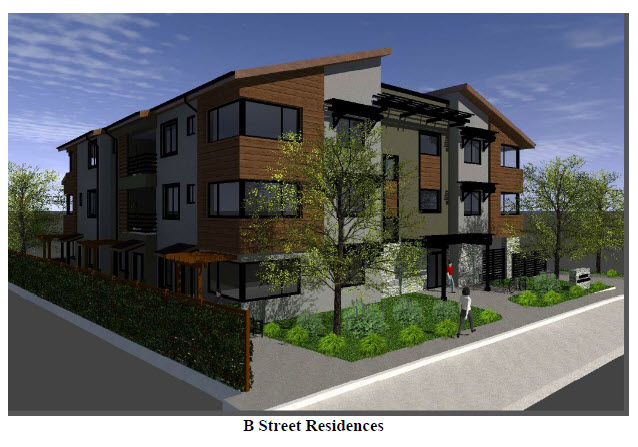 The Planning Commission tonight will hear the appeal of an administrative approval of a redevelopment project of two adjacent parcels located at 820 and 822 B Street.

Currently, each lot contains existing single-family dwellings that under the project proposal would be demolished.  The two lots would be merged into a single parcel for the development of a three-story multifamily building of approximately 15,749 square feet, containing 11 rental units consisting of six one-bedroom units and five two-bedroom units.

The staff report notes that the applicant is requesting to increase the height of the building from a maximum of 38 feet permitted under the R-3 zoning to 41 feet. The project will provide 13 on-site vehicle parking spaces.

The property owners in this case are Kemble Pope and Neal Cordeiro.  The appellants are nearby neighbors of the proposed project. 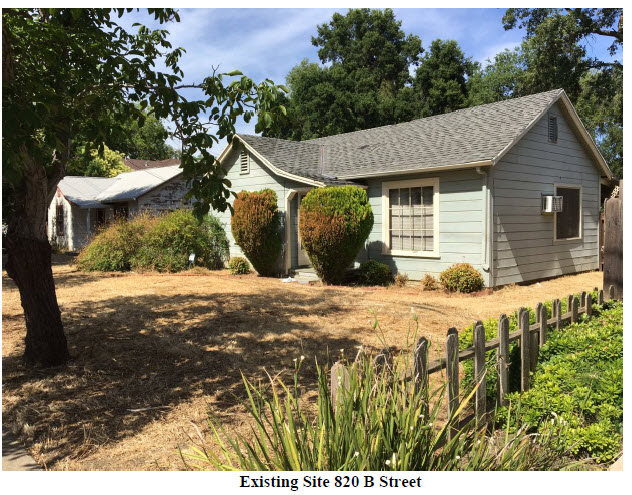 First, parking issues.  The appeal narrative states that “…parking is not really considered. This seems like a glaring omission. Choosing to have the residents of the eleven different units park on a side street is going to present a problem. There is not adequate space for eleven or more vehicles.”

Staff responds, “The project proposes a total of 16 bedrooms and 13 on-site parking spaces. The City has an adopted a Bicycle Ordinance that allows the Director of Community Development to implement certain incentives including offsetting the required number of vehicle parking spaces by a maximum of 2 spaces for projects going above and beyond the bicycle parking requirements and amenities as specified in the ordinance.”

Staff “recognizes that due to the prohibited parking on B Street in the project vicinity, there are concerns regarding the potential parking impacts on adjacent neighborhood streets. The primary concern appears to be misinformation that staff has advocated that the project meet its parking requirement or secure extra parking for residents by obtaining parking permits on nearby streets that allow parking by permit only.”

This is incorrect for several reasons:

Staff writes that they “cannot guarantee that a resident or guest would never park on a nearby street, but given the number of parking spaces that will be provided on the site, it is expected that impacts to these streets would be minimal or short-term.” 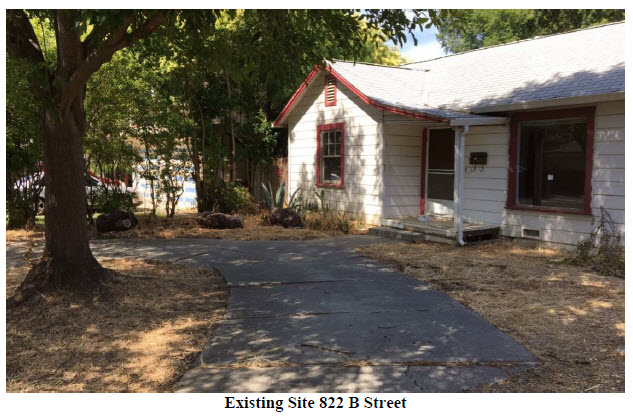 Second, design.  The appellants state, “The project that is proposed changes the property from having two small homes on it to now having 11 apartments. In short, the property is being changed from being a natural part of this residential neighborhood to a full-fledged multi-unit apartment building.”

Staff responds that this “is a transitional zone with different zoning designations on each side of the street that allow different uses.”  Staff notes, “The new development represents a change, however the existing single-family use on the site does not preclude the right of the property owner to change the use or to redevelop the site to the extent allowed under the zoning. The proposal for a multi-unit apartment building at this location is consistent with the principally permitted uses of the R-3-M zoning district.”

The appellants also note, “The current design is not in harmony with existing structures and appears to be imposing, commercial and will have extreme differences in scale from the neighborhood homes.”

Staff counters, “Staff believes that the building would be in harmony with the existing structures when considered in the context of all uses and buildings in the surrounding area. In this case, the project is located across the street from single-family residential uses but also adjacent to a church and in the vicinity of other multi-family residential buildings located in the R-3-M district.

“When the area is viewed as a whole, the case could be made that the existing single family dwellings on the subject site are out of scale with the R-3-M district in which the proposed project is located, given the area is nearly fully developed with multi-family residential buildings.”

The appellants argue, “In-fill guidelines state avoid constructing a new larger building to an existing adjacent smaller building without mitigating the impacts of scale/form differences, privacy and light and air.”

Staff responds, “The project is located adjacent to the Lutheran Church to the south and a multi-family triplex to the north. While the triplex is a smaller building than the proposed building, the infill guidelines do not prohibit a new larger building, and intentionally allow flexibly to recognize the unique circumstances of every site.”

Third, the appellants argue there are “too many units,” stating, “The project would normally have a limit of a certain number of units but because the project has one affordable unit for lower income renters, it is allowed to have more units and to exceed both the normal setback and the usual height requirements. We believe this is disingenuous.”

Staff writes, “The applicant is providing one affordable unit for the project, which under Government Code Section 65915-65918 entitles the project to increased density and incentives that may include modifications to architectural standards required under the City’ zoning such as reduced setbacks, reduced parking, and other incentives.

“Under state law the project is receiving a density bonus that increases the maximum number of units allowed on the site from 9 to 11. The applicant is entitled to and utilizing one incentive to modify the rear yard setback from a minimum of 25 feet required under the R-3 zoning to 22 feet.”

Finally, the appellants argue that the proposed structure is too tall.

Staff responds, “The maximum height of a building in the R-3-M zoning is three stories or 38 feet. Section 40.27.080 of the Municipal Code permits for a “Minor Modification” for up to a 10% increase or decrease in development standards including building setbacks, lot coverage, structure size, structure height, usable open space, parking and parking space.

“The applicant has requested a modification to allow an increase in the height of the building from 38 feet to approximately 41 feet, 5 inches by incorporating a peaked roof…”

Staff writes that it has “has addressed the items raised in the Appeal and recommends that the Planning Commission deny (the appeal) thereby upholding administrative approval of (the project).”

In a statement from Chamber CEO Christina Blackman, “The Davis community has a broad residential base with varying housing needs. Your chamber will continue to inform you of projects and opportunities to get involved.  While the board has not weighed in on this particular project, as always, we encourage our members to review projects and be part of the dialogue.”