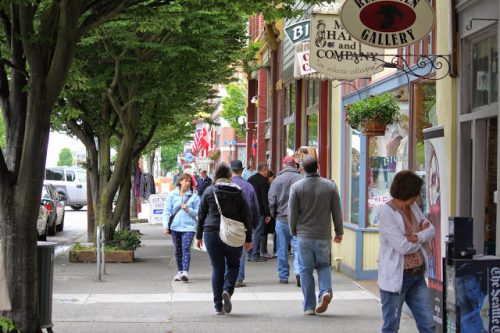 Editor’s note: This article was originally published in the Vanguard on October 30, 2014, and written by then-Chief Innovation Officer Rob White.  At the time, the focus was on the innovation center strategy, but Rob White looked at activities by other cities to diversify their downtown economies, which has come full circle with discussions recently on parking, the efforts to update the Core Area Specific Plan, and even form-based codes.  Rob White even references Dan Zack, who came to speak recently in Davis on downtown planning and revitalizing retail.  A reader suggested we re-run this based on current conversation, and that seemed like a good idea.

As the City of Davis begins moving forward with its next phase of supporting the city-wide innovation center strategy, staff have started doing research on activities by other cities and towns to diversify their downtown economies.

Research has shown that the population in the US is in-migrating to urban cores, largely in part due to the creative class. On the Urban Design Associates webpage about a recent case study in Norfolk, Virginia it was noted that “as residents, businesses, and startups re-enter urban neighborhoods, a thriving and creative economy is returning to our towns and cities.”

Additionally, the case study explains that “in neighborhoods where this transformation is taking place, a dynamic environment emerges with a rich combination of leaders, studio arts, food, technology, craftsmanship, light manufacturing, and performance spaces. Innovative regulation, mix-of-uses, and bottom-up development form a culture of constant tinkering.”

The case study goes on to note that “this has become critical to attracting and retaining talent in cities such as Pittsburgh, Cincinnati, Louisville, Chattanooga, Salt Lake City, Omaha, Nashville, and Norfolk.” It is noted that one particular focus was on a 15-block area known as the Norfolk Downtown Arts and Design District and that a joint effort has been undertaken by “the Downtown Norfolk Council, major civic institutions, non-profits, property owners, and the City of Norfolk.” Note that the efforts are a strong collaboration between the private, non-profit and public sectors.

What was interesting in the case study was that one aspect of the revitalization effort by these organizations was focused on identifying characteristics that were important to a vital urban core. Creating a diverse economy is sometimes a trial and error activity. Davis has had a lot of success in rejuvenating the downtown, with less than a few percent vacancy of store fronts. But what are the amenities and businesses that are going to help attract the creative class?

In the case of Norfolk, the list includes a comedy theater and restaurant, a park in place of a dilapidated building, artist lofts, co-working spaces and new bike infrastructure.

In another article on the Better Cities & Towns webmagazine, there is a discussion about efforts in Redwood City (or as the article notes, its previous moniker of ‘Deadwood City’) to change the urban core through a from-based code (FBC) for zoning.

The article notes that Redwood City has become the “new Silicon Valley Hot spot” and that “a few years ago the city of 76,000 wasn’t even on the radar screen of tech companies.” And now, a cloud storage company just signed a lease for 334,000 square feet of office space.

The article suggest that the implementation of form-based code “has opened the floodgates to downtown residential and commercial development, most of which will contribute to a sense of place because new projects must adhere to a code that focuses on placemaking.”

It is reported in the article that Google is looking to move some offices to downtown Redwood City and the vacancy rate in downtown is 2-3 percent, as compared to the regional figure of 8-10 percent.

The article notes that “Redwood City went from also-ran to Silicon Valley tech center” through a community visioning process that resulted in the form-based code implementation. “Before [it] adopted a FBC in 2011, the city’s entitlement process was much like other cities in the valley—expensive and time-consuming.

Dan Zack, Redwood City’s previous Downtown Development Coordinator, noted that “Redwood City promises quick approval, no hassle, if they meet the code… It’s a tough code, but the developers would much rather have that certainty. Once a couple of projects went through and the code lived up to its promise, the flood gates opened up.”

And certainty for business is a key driver in attracting new investment. As noted, there are several cities in the South Bay area of San Francisco that are equal to or rival Davis for lengthy and difficult land use planning and development processes. Similar to our city, there is a constrained land resource coupled with high valuation.

But Redwood City (like Davis) saw that in order to meet its fiscal obligations to the citizenry and keep the community vital, it needed to encourage revitalization of its downtown.

Redwood City focused on two primary drivers to create their new land use framework: 1) create great public spaces and bring “activity generators” to enliven the downtown, and 2) reform the zoning to make the entitlement process more transparent, ensuring that whatever is built takes an urban form based on a community vision.

Davis has done some of this community visioning. And as we move in to the next phase of the city-wide innovation center strategy, we need to take a look at what is missing in our downtown… both physical assets that will create a draw and land use policies that will help to diversify the economy.

The Davis community has supported downtown densification for several decades through its planning and visioning efforts. Even though we no longer have the redevelopment dollars to help move projects along, we are a city that has done significant reuse and revitalization in the past 20 years and we have every opportunity to do so in the future.

So let’s start the next phase of the innovation center process now through your suggestions of public amenities, types of businesses and examples of successful downtown models that we can emulate. And thank you in advance for the constructive feedback and exemplars that you will highlight for staff. We will collect this information and use it for forums and roundtable discussions in the coming months.

13 thoughts on “Revisiting: What Is Missing in Downtown Davis?”