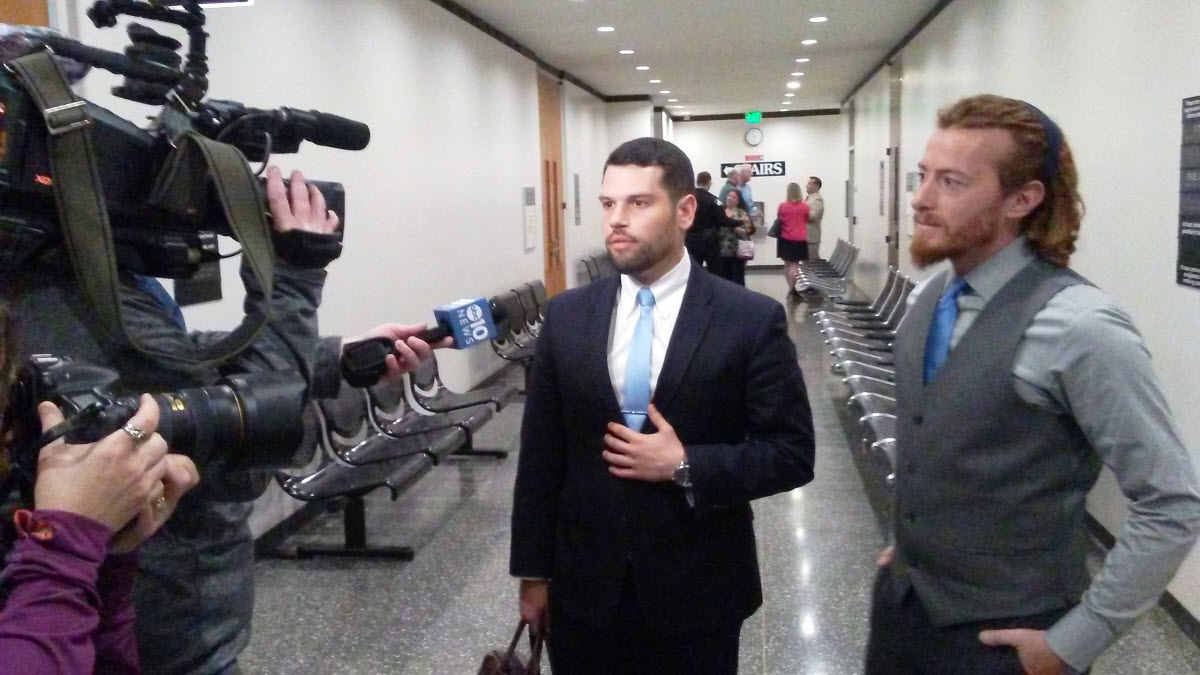 (From Press Release) – The political “pie-thrower” accused of placing a coconut cream pie in the face of ex-Sacramento Mayor Kevin Johnson as a political prank will find out Thursday if Sacramento County will spend more tax dollars to re-try him. After a nearly 2-week trial, a jury on May 15 failed to find Sean Thompson guilty of any of the felony and misdemeanor charges.

The hearing is set for THURSDAY, JUNE 8 in Dept. 9 in Sacramento Superior Court at 8:30 a.m.

On May 15, Superior Court Judge Robert Twiss declared a mistrial when 12 jurors – deliberating parts of five days – reported they were hopelessly deadlocked and could not find Sean Thompson guilty of any of the charged offenses. The trial began May 1, and was sent to the jury late on May 9.

Thompson, a military veteran, was charged with felony assault on a public official, and faced numerous other misdemeanor charges. Jurors who spoke publically after the trial said it was unanimous, 12-0, that he was not guilty of the most serious of the charges, the felony. They could not get a unanimous verdict either way for the lesser assault and battery charges.

Pro bono defense counsel Jeffrey Mendelman and Claire White, of the Vallejo law firm Morton & Russo, called the mistrial a “victory for justice,” and common sense, and praised the jurors for doing their job in the face of sometimes confusing instructions, and very little evidence presented by the DA. The victim, Johnson, was not called and dodged defense subpoenas for months to avoid testifying.

“Of course we would like to have had a unanimous verdict of not guilty, but we’re pleased with the results. We would encourage taxpayers to contact their elected representatives in Sacramento and tell them not to waste any more tax dollars over political theatre, which is what this is,” said Mendelman.

The DA’s office had promised the case was a slam-dunk and that the 12 jurors could easily decide to convict Thompson for the political prank of pieing a politician – a tradition of sorts that results in usually no prosecution.

Jurors, however, agreed pieing someone is not felony assault and battery. And White told the jury “the wrong man is on trial for the one crime,” suggesting it was Johnson who should be on trial for sending Thompson to the hospital. Even prosecution witnesses said Thompson was beaten bloody by Johnson who didn’t stop punching even though Thompson didn’t fight back and was in a fetal position on the ground. Johnson only stopped punching Thompson, who was hospitalized, when his own security pulled him off, witnesses said.

Court observers said the judge in the case gutted the defense plan, refusing to allow several defenses, witnesses and hiding facts from what happened to the jury.