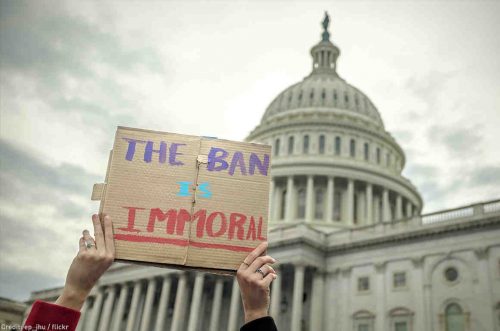 After the Supreme Court ruled today that it would hear arguments on the Muslim ban that a number of lower courts have ruled against, the president claimed “clear victory.”

In fact, the court handed the government a sweeping, but not complete, defeat. It rejected the government’s blanket ban and recognized what all the lower courts in two separate cases saw: The ban would be devastating to families, organizations, and communities across the United States. The court also allowed the government to implement only a narrow version of the ban, explaining that anyone with a “bona fide relationship” to people or organizations in the United States cannot be barred. To view that decision as “clear victory” is wishful thinking.

As a refresher, the court was considering two cases challenging the revised Muslim ban, which had been narrowed after it was swiftly struck down in court: IRAP v. Trump and Hawaii v. Trump. In both cases, federal district courts concluded that the order was an unconstitutional attempt to implement the Muslim ban President Trump had repeatedly promised on the campaign trail, and both courts issued orders blocking key provisions of the ban. Those orders were upheld by two courts of appeals. In a case argued by the ACLU, the Fourth Circuit in Virginia rejected the ban on people from six overwhelmingly Muslim countries, concluding the president’s order “drips with religious intolerance, animus, and discrimination.” The Ninth Circuit blocked that same provision and two others barring refugees, explaining that the president’s order violated federal statutes.

The government wanted to allow the ban to go into effect immediately and completely, arguing that the appellate decisions were wrong. At most, the government contended, the lower court orders

halting the ban should only apply to two individuals (one plaintiff in IRAP and one in Hawaii).

What does that mean? Well, for starters, anyone with close family in the United States is exempt from the ban. The court explained that having a spouse in the United States would be enough to allow entry, and so would having a son-in-law. Coming to live with a family member is sufficient, and so is coming to visit family on a tourist visa. A large proportion of those who would otherwise be barred by the Muslim ban do have family in this country, and remain protected under the Supreme Court’s order.

Anyone with a relationship with a U.S. entity (like a school, employer, or nonprofit organization) is also exempted from the ban. The court was clear this has to be a “bona fide” relationship — meaning it cannot be manufactured just to get around the ban. But, again, a large segment of those who would otherwise be banned will fall into this category: students coming to study at a university, employees coming for a job, and clients and members of U.S. organizations.

So who is banned? It appears relatively few can be legitimately prohibited under the Supreme Court’s decision: individuals who are abroad and have no connections to family or organizations in the United States. To be clear, the Supreme Court did not say the ban is legal as applied to those individuals. It only allowed the government to implement this limited version of the ban while it considers whether the rest can be upheld at all.

Which brings us to the other action the court took today. It agreed to hear both IRAP and Hawaii in October. That is not particularly surprising. These cases raise exceptionally important legal questions, making them precisely the kinds of cases the Supreme Court is likely to review. We are confident that when the court reviews this unconstitutional order this fall, it will strike it down once and for all, and vindicate both our fundamental commitment to religious neutrality and the responsibility of the courts to serve as an independent check on the exercise of presidential power.

So where is the president’s “clear victory”? Nowhere to be found.