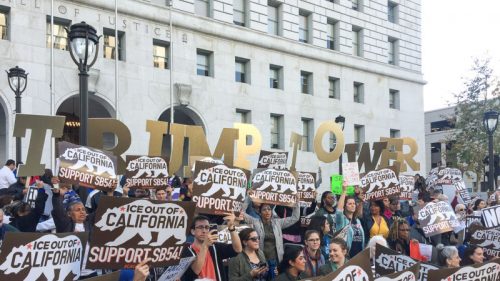 (From Press Release) – Domestic violence survivors, advocates, and lawmakers today called on members of the State Assembly to support and pass the California Values Act (SB 54) to help ensure domestic abuse, sexual assault, and human trafficking victims aren’t afraid to report abuse and seek help from law enforcement due to their immigration status. As the Trump Administration continues to apply pressure on local law enforcement to assist in mass deportation efforts, advocates and service providers have reported an increase in fear and distrust in the justice system among immigrant communities.

“Immigrant victims of domestic violence shouldn’t have to face the impossible choice between seeking safety and support, or experiencing abuse—in fact, that’s not a tenable choice at all—yet that’s what we’ve been seeing throughout the state,” said Kathy Moore, Executive Director of the California Partnership to End Domestic Violence (The Partnership). “The California Values Act can help restore critical options when victims are most vulnerable. Enhancing trust between law enforcement and immigrant victims helps make our communities safer for us all.”

Earlier this year, for example, the Los Angeles Police Department released information indicating that domestic violence and sexual assault reports plummeted among Latino residents in Los Angeles in comparison to the same period last year. Los Angeles Police Chief Charlie Beck recently spoke out in support of the California Values Act (SB 54) and cited the need to maintain trust between law enforcement and the immigrant community as a valuable and necessary public safety resource.

“We must pass the California Values Act (SB 54) now to make sure that crime victims, survivors, and witnesses are not afraid to come forward and seek help regardless of immigration or legal

status,” said Phuong Thao Macleod a domestic violence and sexual assault survivor. “When people are afraid to come forward and report crimes or come to court, it undermines our justice system and makes us all less safe. For those in danger, there is often a real fear of coming forward.”

The California Values Act (SB 54) will help make sure that crime victims, survivors, and witnesses are not afraid to come forward and seek help from law enforcement by ensuring police and sheriffs do not engage in immigrant enforcement without a warrant signed by a judge. The bill would also restrict immigration enforcement actions at schools, hospitals, courthouses, and libraries, creating safe spaces for all Californians.

“Contrary to claims made by Donald Trump, threats of mass deportation have had a negative effect on communities,” said Assemblymember Eloise Gómez Reyes (D-San Bernardino). “This rhetoric has led to the under reporting of serious crimes from witnesses and victims of criminal activity unsure if cooperation with law enforcement will lead to detention or deportation. SB 54 is a pro-public safety bill. We need our limited public safety resources used to make our communities safe, not to be used to backfill the resources of ICE.”

Studies have shown that fear of local law enforcement’s involvement in deportations has a chilling effect on victims and witnesses of crime and their willingness to come forward. Undocumented immigrants and their family members are already less likely to call the police to report crimes for fear that any contact with police could result in their or a family member’s deportation. Service providers in California and throughout the nation are reporting a decrease in the number of calls from domestic violence survivors to their agencies.

“It is no secret the Trump administration is pressuring local and state law enforcement agencies to act as extensions of ICE,” said Assemblymember David Chiu (D-San Francisco).  “This has the effect of sowing fear and distrust in local communities, especially among immigrants who call our state home. Those suffering from domestic abuse are some of the most vulnerable members of our community and SB 54 will help ensure they feel safe coming to law enforcement for help.”