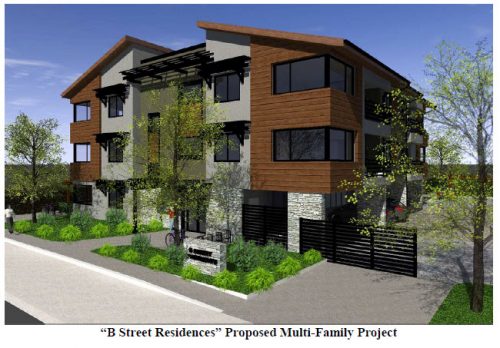 The Davis City Council was not happy to have to weigh in on the B Street infill project.  Several of them specifically noted that the project met the zoning requirements and they didn’t understand why the project was before them.

The council heard from a slew of neighbors well into the evening, unhappy with the size and scope as well as the fit of the project.

But ultimately, in a 4-0 vote with Lucas Frerichs recusing himself due to his home being within 500 feet of the project, the council approved the project and upheld the applicant’s appeal of the Planning Commission’s denial.

Councilmember Rochelle Swanson stated, “I’m surprised this came to us” and, in response to the neighbors, “Some of the comments actually make me sad.”

Like some of her colleagues, she noted, “The governor is pushing to get affordable housing by right, which is going to strip us of our rights.

“Infill is hard,” she said.  At the same time she noted that parking is an issue and she believes that more people should be biking and walking, given where this project is located.

“This meets all the things we say we want,” she said.

“We’re always talking about precedent, ” Councilmember Swanson said, noting that this pushes a minor “mod” of an architectural feature by two feet by a couple of setbacks, and “if we can’t do that in Davis a couple of blocks from downtown in an R3 infill in zoning that’s been that way for years, what can we do in infill in this community?”

She added, “If we were talking about something that is grossly outside of what is already allowed, it would be another thing.”  She continued,  “It’s not incompatible in the larger scheme of things.

“At some point we have to say yes,” she said.  “This is something that’s allowable in this district.  If we can’t say yes to what’s allowed, what can we possibly say yes to?”

Will Arnold was also critical of the Planning Commission, stating, “I took a little issue (to) the reasons given by the Planning Commission for their opposition to it, specifically… he or she seemed to say it’s unattractive.  I suppose that’s just somebody’s opinion and I don’t think that’s a reason to vote against something.”

Councilmember Arnold said he disagrees that this is a neighborhood of single-family homes.

Will Arnold also believed that the project fit within current guidelines.

“The General Plan takes neighborhood preservation very seriously, and yet this project fits within the zoning here,” he said.  “Typically when we’re reviewing development proposals, it’s because we’re reviewing a zoning amendment, but of course that’s not the case here.  The question is whether we allow for maximizing what is allowable.”

Of the four councilmembers it was Brett Lee who was most sympathetic to the neighbors’ position, defending them against calls of nimbyism, relating to the acronym for Not In My Back Yard.

“It’s quite reasonable they have concerns (that) their neighborhood is changing,” he said.  “I don’t think the correct response is to label someone as a NIMBY because of whether they live.”

He mentioned that he had voted against Mission Residence because something exceeded the zoning.  “This is a little different,” he said.  “The zoning is being adhered to.”  He said, “There has to be a good reason to change the zoning.”

He said, “It would be an economic taking if we essentially down zone this parcel.”  And he added, “It’s clearly not a single-family neighborhood when we talk about this R3 zoning, and this is a zoning that has been there for a while.

“I’m not really clear why the Planning Commission did what they did,” he said. But he added, “I’m not constrained by that.”

He argued for a more robust parking plan.  He said that, while we want to encourage bicycling, “how many here bicycled here tonight?

He suggested, “It would be a reasonable approach.”  He said he was open to hearing if there would be support for another round of discussions, while he recognized that there was some time urgency.

Mayor Davis seemed stuck between sympathy for the neighbors and his commitment to find housing for those in need.

He stated that the previous council had attempted to address housing by putting Nishi on the ballot.  That lost by 700 votes, he said.  “Personally I took it very hard because I put a lot of work into it, but also because it seemed to me that was an opportunity for us as a city to do the right thing in an environmental sense but also to provide what we haven’t been able to provide over the last decade – which is significant rental housing.

“The tradeoffs are always challenging,” he said.  “I really have learned to listen to the community about their concerns about keeping their place nice.” However, he said, “We have a growing population in the region, not just in Davis, which is really putting pressure on us.

“To me I have to give priority about giving someone a place to live and we have to figure out the rest,” he said.  “That’s where I’ve been and that’s where I continue to be.”

Mayor Davis continued, “I’m struck by how we’ve constantly been asked to do less” in terms of housing proposals coming before council “in the face of one of the worst housing crises in the country.”  He added, “I keep thinking about the people who really need housing now, who can’t find it,” he said.

He said he heard Mayor Pro Tem Lee suggesting it be sent back for more discussion, but ultimately sided against it.  “I really don’t want to,” he said.  “I don’t think this should have come to us.”

The mayor noted that the Planning Commission “is upset at us for encouraging developments that ask for a General Plan Amendment.  They don’t like it when they get those – because they’re being ask to proclaim on something that go outside the boundaries.”  He said, “Here they get a project that’s in the boundaries and we still get it.  That frustrates me a little bit.  I don’t know why we got it.”

He said, “I believe my responsibility is to find to a way through the housing crisis in California.”

Meanwhile, Mayor Pro Tem Brett Lee pushed for a discussion between neighbors and the applicants, arguing the third or fourth go-round is better than the original proposal.

But even he agreed, “It fits the zoning.”

As Will Arnold explained, he didn’t want to go down the same path as they went with the hotel proposal.  “That was not only a change in zoning,” he said.  “It was about the use, that to me, that was a major difference from what we’re talking about.”

He said here, even the opponents don’t disagree with the use, “fundamentally this is the use that’s envisioned by the zoning.”

Ultimately the council decided against the additional discussions at this time and voted 4-0 to approve the project.