The city’s current long range budget forecast shows an annual shortfall of $7.8 million in terms of unbudgeted infrastructure and retirement benefit needs for the city.  These have been called “unmet needs” and encompass expenditures for “transportation, parks and public facilities now and into the future” which “have been the primary focus of attention, although other issues have been discussed, such as public safety, health, and human/social services.”

Since voters passed a sales tax in June 2014, the city council has been unable to agree on the next revenue tax and what form it would take.  Concerns over low polling numbers in July 2014 led the council not to put a parcel tax on the November 2014 ballot, and concerns over form and type of tax led the council to scrap plans to put a measure on for June 2016.

That probably won’t be an option in 2017.  The current Parks Maintenance Tax set at $49 per parcel and raising around $1.4 million annually is scheduled to sunset in June 2018.  By itself, the parks tax does not cover more than a quarter of overall costs.

that excludes water and sewer would drop to $820,000.  And a Sugar Sweetened Beverage Tax at one cent per ounce would generate around $1 million.

As staff notes, should the current parks tax not be renewed or replaced, “alternative reductions in service levels would need to be considered.

“In order to place a measure on the June ballot, the County must complete all documentation for the election no less than 88 days prior to the election,” staff writes.  That gives the council until January 2018 to make a decision – however, often the council has waited until the deadline is upon them and has been unable to act.

Staff further notes, “During a general municipal election, the City Council may choose to place either a special or a general revenue measure on the ballot.

“General taxes, which are not specified for any particular purpose, are only allowed during a general municipal election, absent an emergency. Davis holds general municipal elections in June of even numbered years. Special taxes, such a parcel tax or any tax specified for a particular purpose and therefore requiring a 2/3 vote, may be submitted to the voters at any duly called election.”

The advantage of a general tax is that it only requires a simple majority.  However, it may not specifically target areas of spending.  On the other hand, a special tax has the advantage of having specified purposes, but requires a two-thirds approval – a much higher barrier.

With regard to unmet needs, staff notes, “While there is general consensus that the City has unmet needs, there are mixed opinions about what defines a need and whether new revenue should be pursued to address those needs.”

Parcel Tax: “A parcel tax can be targeted to address any legitimate need of the City, including infrastructure needs for streets and roads; recreation amenity needs like repairs and/or enhancements to existing pools; irrigation expenditures in the parks; road and bike path maintenance and rehabilitation; or other potential enhancements to the community. Different fee structures can be put into place for residential and non-residential properties. If the measure notes that the revenue is for a specific purpose, then funds may only be spent in that way.”

Utility User Tax (UUT): “Utility user taxes are levied as a percentage of the direct cost of the utility service delivered, and may be levied on utilities such as gas, electric, telephone/ communications, water, sewer, sanitation and/or cable TV. The tax appears in the monthly billing paid by the customer and the tax is paid to the utility, which in turn remits the taxes to the local government that levied the tax. Many California cities levy a utility user tax and it is often a substantial revenue stream for their general fund. Utility user tax tracks with inflation, it applies to a broad range of the population (e.g. homeowners, renters, businesses) and it is not as sensitive to economic downturns as the other general taxes.”

Staff does warn: “UUTs have experienced mixed rates of success. In November 2016, voters in eight cities considered measures to increase or expand utility user taxes. All were majority vote general taxes. Five of the eight measures passed. Four of the passing measures were no change in rate, only to expand to wireless telecom, the fifth passing was an extension of existing tax. There were three that failed, two were to increase the tax amount and one was to expand to wireless telecom.” 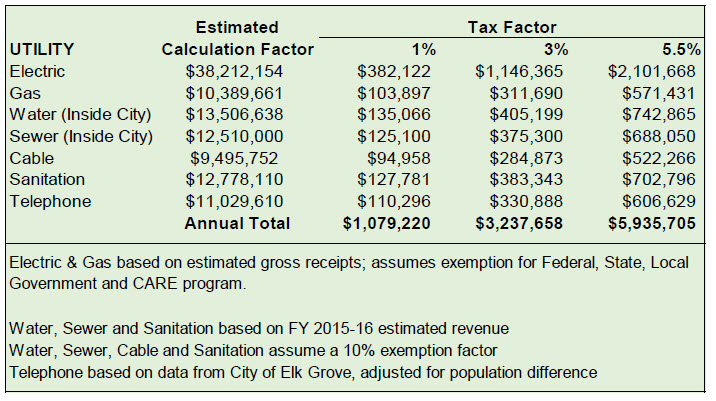 In the last budget/election cycle, the city got feedback from the Finance and Budget Commission and Community on the UUT.

“In 2015, the Finance and Budget Commission discussed a potential Utility User Tax at multiple meetings. While the Commission on the whole was sympathetic to the fact the City has unmet needs, considerable conversation was devoted to defining actual needs (vs. preferences or wants) and determining true unfunded costs.”

Among other things, the commission wanted to update multi-year projections of revenues and expenditures which included unfunded liabilities.  This has largely occurred through the work of Bob Leland this year.  They asked the city to further review cost saving measures and create a complete list of deferred maintenance and capital improvement projects.

The community group in 2015 said, “Much like the Finance and Budget Commission, there were mixed viewpoints about whether a utility user tax was the right mechanism to fund unmet needs. Primary reasons included a concern about the city’s ability to continue to rein in costs in the face of additional revenue, the sense that the City had not yet cut expenditures sufficiently and concern that a utility user tax was not the correct taxing mechanism to generate revenue for infrastructure needs.”

Staff noted, “There were differences of opinion about the levels at which to tax specific utilities, but the general feedback was not to exceed 5% for any of the utilities.”

There were also “mixed viewpoints about whether to put forward a general tax or a special tax, there was consensus that the city needed to provide as much information and transparency as possible to the public about the need for the tax and the projects which such a tax would fund.”

Sugar Sweetened Beverage (Soda) Tax: “The City Council has had discussion in the past on sugar sweetened beverages, a different kind of measure – one where the primary purpose is less to raise revenue as much as it is to address a public health policy issue.”

While the Berkeley tax passed in November 2014 and generated $1.46 million its first year, staff notes, “The policy goal of the tax, however, is to reduce consumption, so it is possible that revenue will decrease over time.”

Staff adds, “The different nature of this tax makes it less suited for covering basic city needs and better suited to promote healthy lifestyles, the policy objective for which it was created.”

Transient Occupancy Tax: “The Transient Occupancy Tax (TOT) is charged to visitors who stay overnight in a hotel room, based on a percentage of the cost of the room night. Prior to June 2016, the TOT in Davis was equivalent to 10% the cost of a room night and generated $1.5 million in Fiscal Year 15-16. Subsequent to that time, Davis residents approved a 2% increase to TOT, which is estimated to generate an additional $300,000 in annual revenue.”

Transactions & Use Tax (Sales Tax Override): “In June 2014, the voters of Davis approved passage of a one cent local transaction and use (sales) tax through December 31, 2020, unless reauthorized by voters. This tax currently generates over $6.0 million in annual revenues. The tax was originally proposed as a means to address historical structural budget shortfalls, as well as provide funding for a variety of expanded service demands.”

Staff notes that Davis could add up to an additional one percent sales tax, with each eighth cent increase adding roughly $375,000 in annual revenue.  However, they warn, “When considering this option, it is to be noted that on a regional level, Davis is among one of the highest transactions and use tax rates and increasing beyond the current rate may place Davis at a competitive disadvantage.” 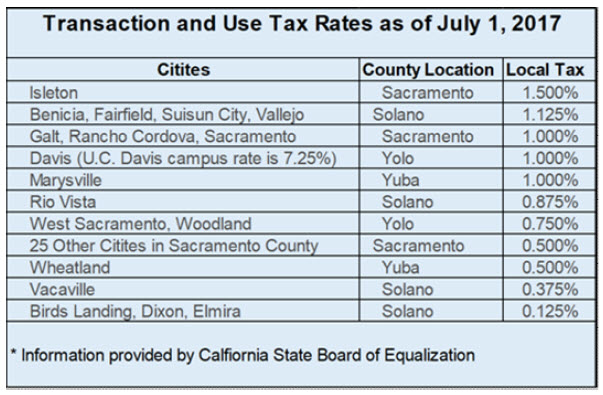 The city has until late January to make a decision, but, as we have seen in the past, waiting until that deadline has been one of the barriers preventing the city from putting a revenue measure on the ballot.

Share:
Tags:Infrastructureparcel taxParksParks TaxRevenue MeasuresRoadsSales TaxUnmet NeedsUUT
Previous : UCD Responds to County Resolution
Next : My View: The War on Drugs Did Not Turn Out Well, So Let’s Be Careful on Approach to Opioid Abuse

21 thoughts on “Council to Consider Possible Tax Measures for 2018”