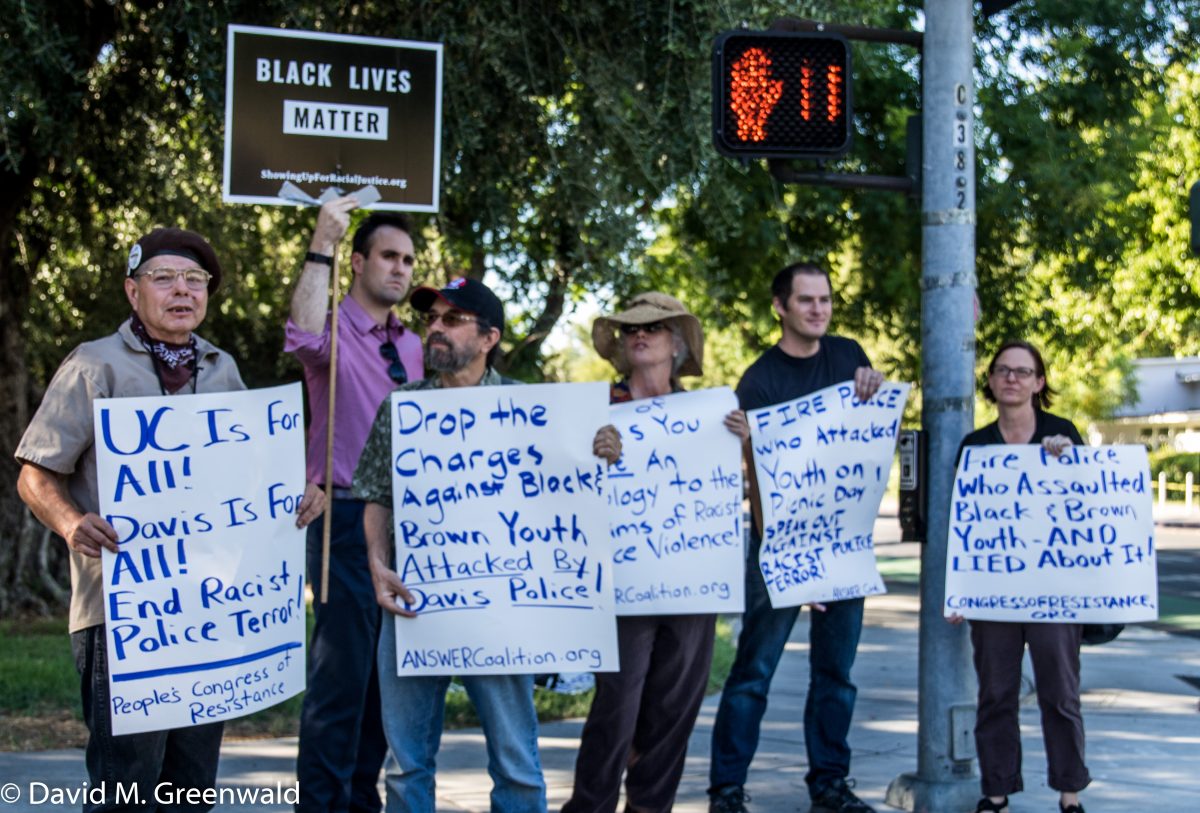 The night began with a small contingent of protesters in front of City Hall at the corner of B Street and Russell Boulevard, holding signs and demanding the charges against the five defendants in the Picnic Day incident be dropped, and that the officers and Chief Darren Pytel be held accountable for what occurred.

This theme continued during the regular public comment, as about a dozen residents came forward to demand what they saw as justice for the five defendants in the Picnic Day matter, and to demand that the council hold the officers and police chief accountable.

ASUCD Representative Daniel Nagey spoke on behalf of ASUCD, and he said, “It bothers me immensely that something like this has happened in our town and has failed to (be) addressed by our councilmembers.  Police officers clearly involved in this event have not faced the repercussions or have addressed the problem publicly – in fact they lied.

“You need to show your support for marginalized communities by helping to drop the unrightful charges for the accused,” he said.  “If you are neutral in situations of injustice, you’ve chosen the side of the oppressor.”

The question before the council on this night was how to structure a discussion on police oversight going forward.  The council would learn from City Attorney Harriet Steiner and Chief Darren Pytel that there are limits as to what a citizen’s review board can do – especially regarding personnel matters.

Mayor Robb Davis moved forward a plan that was approved unanimously by council.  It calls for the hire of a short-term consultant to review the current system along with recommendations from the Human Relations Commission (HRC).

The city would participate in up to five public or sponsored forums with the consultant there as a content expert.  “Davis-based facilitators could provide structure for community dialogue at the meeting, but the consultant would help group the conversation with accurate technical information/input.”

The key, he said, is that this has to be a process and ultimately a police oversight system that works for Davis.

“This belongs to us,” he said.  “This cannot belong to the police department.”  The mayor added, “This has to be an action – civilian oversight – that belongs to the community.”

He also spoke of the need for legitimacy.  “Whether we like it or not – and we’re tired and frustrated at the things people are saying to us, but there is a legitimacy question,” he said.  It’s not only locally, but “it’s legitimacy of the policing in our nation.  It’s fundamentally in question right now.  We have to acknowledge that – we’re part of that system.”

Mayor Davis contrasted this approach to a task force model.  He said, “The task force model has us appointing people to… help us.  I don’t think the people trust us enough to do that.”  He added,

“I feel every year that I’ve been on council, people trust us less.”

Councilmember Will Arnold in his comments went through the HRC recommendation, expressing some disappointment that the recommendation was not included in the staff report.

“I find it reasonable that if someone feels that they were targeted or mistreated by police, that the last thing that that person would ever want to do is go into the police station – so there has to be somewhere else or the receiving entity that is receiving this,” Councilmember Arnold stated, believing that the best group might be a diverse group of community members.

On the other hand, Mayor Pro Tem Brett Lee pointed out that when talking to people with complaints, he found it to be “deeply personal” and “at some level  humiliating.”  He said, “So the notion that we are going to create this commission which would by definition be open to the public and would have the ability of the press to be there…  and have the person make a comment to this group of people about they feel like them as a person was diminished, I think is unrealistic.”

He said, “I think the community members have it right at some level in that we’re kind of being sticklers to what is our zone of control, or where we have some sort of jurisdiction.”  He noted, “We don’t have jurisdiction over a variety of things, but that hasn’t stopped us in the past.”

He noted the issues of Standing Rock and Trans-Pacific Partnership.  He said, “under no stretch of the imagination do we have any sort of authority over whether the United States enters into this trade agreement, yet we took time during a council meeting to discuss the matter.”

Mayor Pro Tem Lee said, “Why can’t the council weigh in and give their thoughts on Picnic Day?”  He said he would be happy to have an agenda item on Picnic Day and weigh in on it.

Councilmember Lucas Frerichs spoke in favor of oversight and also acknowledged, from his time in Davis and speaking with people of color, that people of color have received different treatment by the police than others in the community.

He said, “Council is totally committed to making actual and positive change.”  He added, “Actions speak louder than words.”

Councilmember Frerichs indicated that he was supportive of the HRC motion and supportive in general of having an auditor.  However, at the same time, he believes “there are a lot better options out there than what we’ve had.”

He said he believes that the vast majority of the people in the community are unaware that the police auditor exists in the community – although when he polled the room a large number seemed aware of the position and the name of the individual.

He also said he was supportive of the need to have, at minimum, regular reports to the public.

Mayor Davis indicated in his proposal that the consultant would use his or her own experience, public input from forums and input from the Davis Police Department itself to recommend one to three options that would seem to fit Davis given its size, history of policing and community needs.

Recommendations, his proposal stated, “should include model contract and scope of work” for the auditor, and details of the role that other entities might play and how “they might change from what is currently in place.”

He is hopeful this can be completed by the end of the calendar year.

The council approved this plan 5-0 and City Manager Dirk Brazil indicated that staff would have immediate conversations about how to move forward.