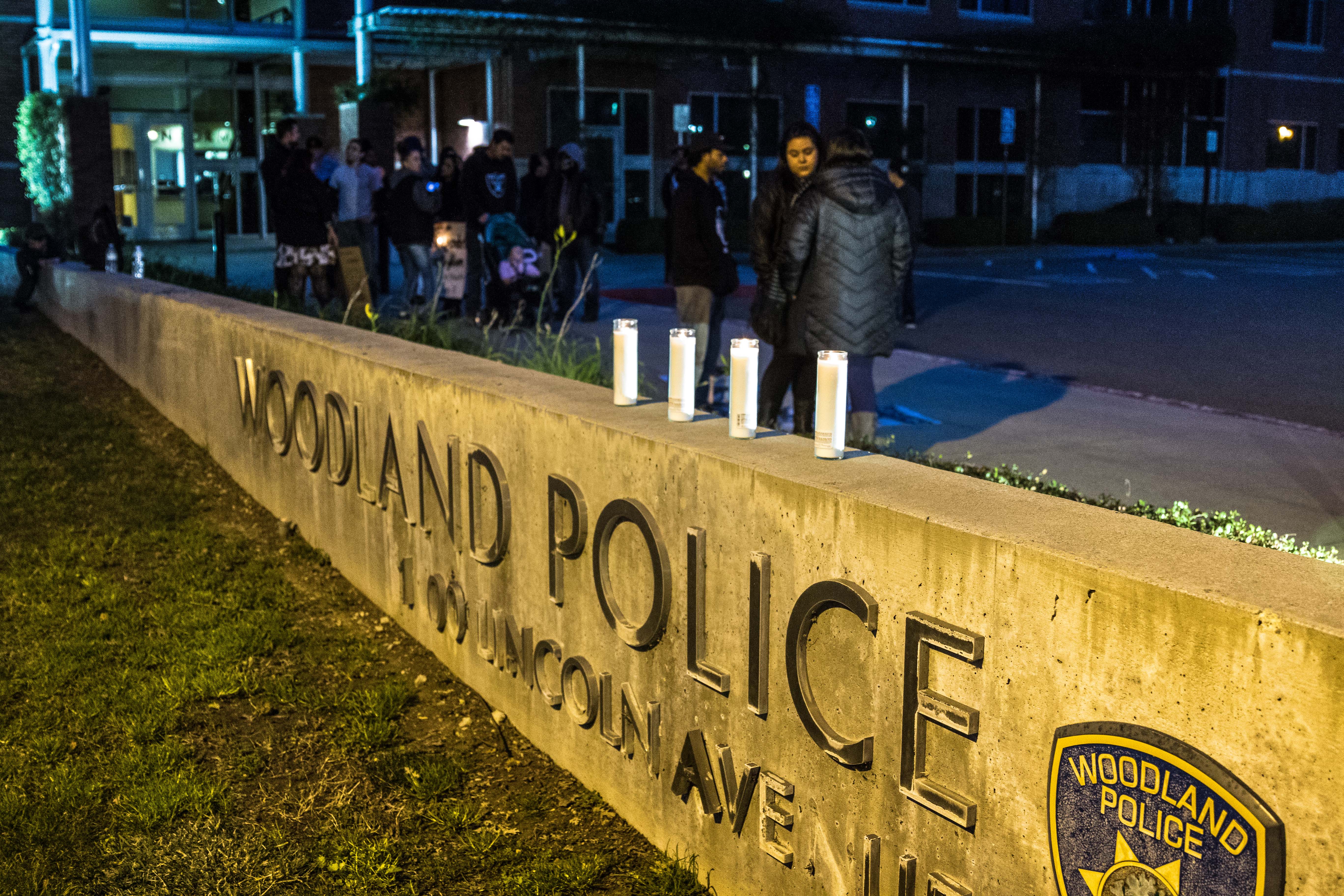 The Yolo County DA’s Office on Wednesday issued a 28-page report on the February death of Michael Barrera after he died following a confrontation with Woodland police.  The report concludes that “our office concluded that the members of the Woodland Police Department had used reasonable and necessary force during the detention and arrest of Michael Barrera.”

The cause of death officially is “sudden death with methamphetamine intoxication during restraint by law enforcement,” although the coroner’s report found the manner of death to be undetermined.

The DA concludes, “There is insufficient evidence to conclude that the use of force by the officers was unreasonable or had proximately caused or contributed to the unfortunate death of Michael Barrera. Hence, no criminal charges will be filed in this case.”

The city of Woodland in a statement noted, “Consistent with best practices and to ensure that the results of this investigation are independently validated, the City has formally requested that the California Department of Justice, Office of the Attorney General, conduct an additional review of this incident.”

They also noted that an “internal investigation being conducted by the Woodland Police Department remains ongoing at this time.

“The City’s goal is not only to ascertain the facts surrounding this incident, but also to do so in a manner that instills confidence in the process and supports the need to build trust between the

community and the Woodland Police Department,” the city of Woodland said in the statement.  “Mr. Barrera’s death is a tragedy and our thoughts continue to be with his family.”

Stewart Katz, who represents the family in pending litigation, will speak with the Vanguard today about his initial thoughts on the report.

Marissa Barrera, the sister of Michael, said in a post on Facebook, “this ‘finding’ is not surprising to us.”

She said, “Our experience with WPD and YCSO has been horrible from the go. Mind you, we are the family, we are also victims who are mourning the death of our loved one. A brother (MY brother), a son, an uncle, a friend and most importantly a father.”

She added, “To sum it up. WPD, YCSO, Yolo County DA’s office…. we expected this, this is a piece of the puzzle and the process. Expect more from us.”

According to the DA’s report written by Deputy DA Alvina Tzang and District Attorney Jeff Reisig, on the afternoon of February 8, Woodland police “received three separate dispatch calls to respond to Matmor Road and its surrounding areas regarding a male adult who was armed with weapons and was last seen exposing himself to others.”

The weapons were reported to be a large kitchen knife, a pair of scissors and a golf club. The suspect was described as a Hispanic male with a towel, bald, wearing a coat, shorts and tennis shoes.

Mr. Barrera was reported to be very agitated and officers were unsuccessful in their attempts to convince him to drop the golf club.

“A struggle ensued while the officers desperately tried to restrain Barrera in handcuffs. Barrera continued to scream and struggle even after he was placed in handcuffs,” the report said.  “The struggle ceased all of a sudden when Barrera began to vomit, and he shortly thereafter became nonresponsive.”

The officers attempted medical assistance and rendered CPR.  Mr. Barrera was transported to Woodland Memorial Hospital where he was pronounced dead shortly after.

Sergeant David Krause initially exited his vehicle upon arrival with his sidearm drawn, ordering Mr. Barrera to drop his golf club.  Mr. Barrera did not comply and walked away from the officers. Sergeant Tom Davis and Officer Parveen Lal followed with their Tasers drawn.

The DA writes, “During the initial encounter, officers gave repeated commands to Barrera to drop the golf club, which Barrera ignored. Instead he was acting agitated and began yelling profanities at the officers.”

Mr. Barrera stated “that a golf club was not a deadly weapon and told the officers to put their gun and Tasers down.”

At one point, Mr. Barrera was said to charge toward Sgt. Krause.  “Sergeant Krause pointed his firearm at Barrera but did not discharge it. As Barrera was charging at Krause, it appeared as if Barrera had lost his footing on the slippery and muddy grass. He went down on the ground, dropping the golf club.”

At this juncture, “Sergeant Davis’ primary objective was to get closer to Barrera so they could physically restrain him in order to minimize the risk of Barrera escaping and posing a safety hazard to other citizens.”

When Mr. Barrera charged a second time, he brought himself and Sgt. Davis to the ground.  At this point Officer Lal “deployed his taser with the taser probes making contact with Barrera’s lower hip area” but “the taser did not have any effect on Barrera as Barrera continued to fight with the officers.”

Officer Lal activated his Taser a second time as the other officers struggled to restrain Mr. Barrera. “The taser deployment again did not have any effect on Barrera.”  At this point, “Barrera began to grab and dig his fingers into Sergeant Davis’ eyes and face, which resulted in bleeding and a laceration under his eye.”

The DA writes, “Sergeant Davis applied a few strikes to Barrera’s face in an attempt to gain compliance and control of Barrera’s arms. Sergeant Davis continued to order Barrera to stop resisting. This was followed by a third taser deployment and Barrera continued to fight through the tase. Sergeant Davis asked Officer Lal to cease the taser deployment due to the fact that Sergeant Davis could feel the electrical current from the taser and it was causing his arm to shake. Seeing that the taser had no effect on Barrera and the three officers could not maintain enough control over Barrera to handcuff him, Sergeant Krause called for Code 3 cover.”

Finally the officers were able to, with additional assistance, secure Mr. Barrera in handcuffs.  They reported Mr. Barrera “continued to kick and tried to lift his legs off the ground.”

Officer Wright then put his knee on Mr. Barrera’s shoulder “with just enough force to overcome the resistance from Barrera.”

All of a sudden, “Barrera began to vomit and liquid was coming out of Barrera’s mouth. Barrera then became unresponsive as he ceased to grab onto Officer Wright’s hands. Barrera continued to cough up liquid.

“The officers immediately turned him over and summoned medical assistance. One of the officers checked but could not detect a pulse from Barrera. Officer Drobish promptly started CPR and Officer Bell assisted in the resuscitation efforts.”

The DA says during the encounter that the only weapon used on Mr. Barrera was the Taser.  The patrol car video showed the elapsed time between their initial arrival and Mr. Barrera’s last statement was three minutes and 48 seconds.  From the time he was last heard on the video to the time an officer announced “he’s out” was one minute 18 seconds.

Mr. Barrera could be heard on the audio continuously screaming and moaning until he became unconscious.

The autopsy found that other than “multiple scattered abrasions and contusions on Barrera’s body, there was no obvious significant external trauma or signs of fatal injuries observed during the postmortem examination.”

The toxicology report showed a reading of “81 ng/ml of Amphetamine and 1,800 ng/ml of Methamphetamine.”

Finally, on January 10, “police and a case worker brought Barrera to the Woodland Memorial Hospital for a psychiatric evaluation after Barrera’s mother called to report her son acting bizarre and delusional.”

He was “was diagnosed with bipolar disorder and amphetamine use disorder.  Before Barrera could be fully treated at the hospital, he departed the hospital against medical advice on January 17, 2017.”

The DA writes: “Because the officers had reasonable cause to believe Barrera had violated multiple sections of the Penal Code, and Barrera’s actions in a public place was causing public safety concerns to other citizens in the community, the officers’ initial contact with Barrera was based on reasonable suspicious that criminal activity was afoot, and thus lawful. Even assuming, in arguendo, that Barrera did not have a golf club in his hand, the officers could still have detained him on reasonable suspicion that he was the subject who had violated the law by exposing himself to others and who had a knife concealed upon his person.”

They further write: “Because a golf club can readily be used as a deadly weapon to inflict serious bodily injury or death on others, the officers acted lawfully by arming themselves with tasers and a firearm for defensive purposes. Even though Barrera raised the golf club and charged at Sergeant Krause, which constituted an assault with a deadly weapon on a peace officer, Sergeant Krause merely pointed his firearm at Barrera but never discharged it.”

They note that a Taser was deployed three times, “In this case, even though the taser was activated three times, it did not appear to have any effect on Barrera as he continued to actively struggle, and lifting his legs, head and shoulder off the ground. The taser did not cause any serious or permanent injury to Barrera.

“Based on the totality of the circumstances, the use of the taser in this case was reasonable force utilized by the police to try to subdue a subject who had assaulted two peace officers and who had consistently disobeyed their commands.”

The DA concludes, “After a thorough and careful review of the evidence in this case, it is the conclusion of the District Attorney’s Office that no criminal charges will be filed against any members of the Woodland Police Department. There is insufficient evidence to show that the force used in this case was excessive or unreasonable, or that such force had proximately caused the unfortunate death of Michael Barrera while he was in the custody of the Woodland Police Department. Our office finds that the officers had only used reasonable and necessary force to detain and effectuate the arrest of Michael Barrera. Based on this finding, no further action will be taken in this matter.”

The Vanguard will have additional coverage as more information comes available.

(Disclaimer: The Vanguard employees Marissa Barrera, sister of Michael.  She was hired on June 15).