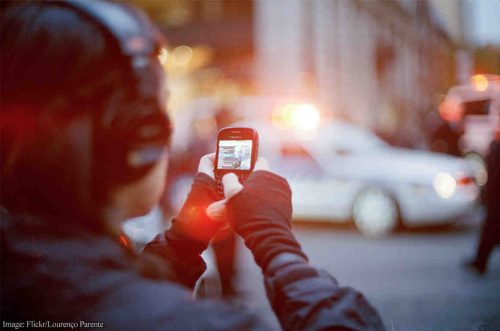 If you are one of the 77 percent of Americans who own a smartphone, then there’s a good chance that every time you leave the house, you carry with you the most powerful tool for police accountability that exists today. On Friday, yet another federal court ruled that your right to record the police performing their duties in public is part of the freedom of speech protected by the First Amendment.

Time and again we’ve seen civilians’ photos and videos of police expose the realities of policing in powerful ways. Ordinary people’s cell phone recordings of police interactions have been a starting point for national conversations about police reform and have sparked grassroots movements seeking accountability for how — and against whom — the police use their tremendous power.

devices not only have an important role to play in holding the police accountable — they also have constitutional protection for this activity. When police retaliate against people who record them, they violate the First Amendment. No federal court of appeals has disagreed with this. Five of the courts of appeal have not ruled on the matter, but it’s looking increasingly unlikely that any of them will disagree.

In the past few years, the ACLU of Pennsylvania has filed five lawsuits against the City of Philadelphia — and several more against other municipalities — on behalf of people who were arrested, detained, or cited in retaliation for recording the police. The most recent two cases in this series were brought on behalf of Rick Fields, a Temple University undergrad arrested on a public sidewalk for taking an iPhone photo of police breaking up a house party across the street, and Amanda Geraci, a legal observer who was violently restrained across the neck by a police officer at a demonstration when she attempted to photograph the police arresting a protestor. In February 2016, a trial judge threw their cases out, reasoning (incorrectly) that the act of recording the police was not protected by the First Amendment.

On July 7, the Third Circuit reversed that ruling, concluding that Mr. Fields and Ms. Geraci’s First Amendment rights had been violated.

The court explained that, because the First Amendment plainly protects the right to possess and distribute photos and videos, it must also protect the act of making those photos and videos. But even more importantly, the court explained, the First Amendment protects the right to gather information about public officials, including police officers. Without a constitutional right to collect and disseminate information about the government, the people would be left in the dark, unable to make informed decisions and participate effectively in the democratic process.

Indeed, in 2017, civilians with smartphones are as critical a source of information about how police officers use their power as the formal press. As the Trump administration begins to scale back the federal government’s police reform and civil rights work, the role that ordinary people play in keeping the local police forces in check has never been more important.

So download the ACLU Mobile Justice app for your state. Brush up on your rights when recording the police. And if you find yourself witness to a police encounter that you think needs to be documented, stay safe, and pull out your phone. The ACLU and the U.S. Constitution have your back.