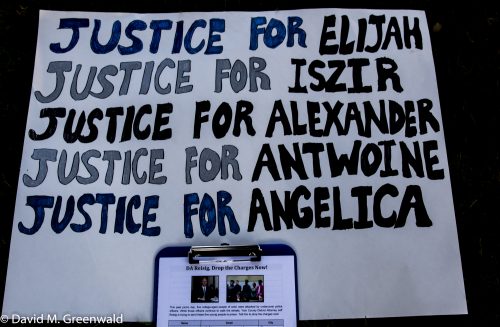 Alexander Craver, Antwoine Perry, Iszir Price, Angelica Reyes and Elijah Williams each face felony charges for a violation of section 245(c) of the California Penal Code which describes assault by means of force likely to produce great bodily injury on a peace officer.

The defendants are also charged with a violation of Penal Code section 69 in which the individuals are accused of “willfully and unlawfully attempt(ing), by means of threats and violence, to deter or prevent …  an executive officer, from performing a duty imposed upon such officer by law and did willfully, unlawfully, and knowingly resist, by the use of force or violence, such officer, in the performance of said officer’s duty.”

This week, activists gathered in the park to demand that the charges be dropped.

Kate Mellon-Anibaba, one of the organizers with “Statement of Love,” told the Vanguard, “We are out here to bring awareness to the five individuals who were victims of police brutality during Picnic Day this year.”

Ms. Mellon-Anibaba told the Vanguard, “We want the charges dropped. We want the police to be accountable and we also want police oversight”

Paul Fullerton and his wife Maricel were scheduled for a preliminary hearing on Friday in front of Judge David Reed.  Mr. Fullerton faces multiple felonies on accusations he sold marijuana out of his Woodland store, Lil Shop of Growers.  There is also an enhancement for possession of a firearm during the commission of a felony and a charge of child abuse.

The YONET team had received information that Mr. Fullerton was allegedly selling marijuana out of his Woodland, CA, business, and then arranged for an undercover YONET informant to purchase marijuana from Mr. Fullerton.

On Friday, the defense asked for a delay as they had received what was described as “exculpatory evidence.”  Deputy DA Garrett Hamilton, sitting in for Kyle Hasapes, agreed to the continuance with the preliminary hearing now scheduled for August 29.

Meanwhile, there will be a hearing on August 1 in which the judge will rule on a Pitchess motion to access an officer’s personnel file.

Judge Timothy Fall at a May hearing denied the Pitchess motion, which included a sealed affidavit.  Defense attorney Joseph Tully filed the motion under seal and Judge Fall ruled, “The Court finds there is inadequate cause to go to an in-camera hearing on the… the Pitchess Motion in the Fullerton cases.”

The defense then appealed to the 3rd District Court of Appeals, but were summarily denied.  They have apparently refiled and Judge Mock, sitting in for Judge Reed, was prepared to rule but there were no attorneys available from the custodian agencies.

The jury hung in his trial on the murder charge, but Mr. Hendrix on Thursday was still sentenced to 42 years in prison.

Here is the DA’s press release:

sentenced the Hendrix on one count of gross vehicular manslaughter while intoxicated, one count of driving while under the influence causing injury with an enhancement for injuring multiple victims, and four separate counts of child endangerment. Next the Court also resentenced Hendrix in a domestic violence case from 2015 which included two counts of felony domestic violence from two separate dates. Hendrix had been convicted of the domestic violence case on February 19, 2016 and was allowed to stay out of jail after posting bail. Hendrix then committed the vehicular manslaughter just five days later on February 24, 2016.

In May 2017 a jury heard four weeks of evidence. The evidence showed that on February 24, 2016, the Hendrix drove a car at speeds of over 80 miles per hour in a 45 miles per hour zone on Second Street in Davis which is a two lane road. Hendrix was intoxicated by both methamphetamine and marijuana. Hendrix started tailgating one driver within just a few feet of the rear bumper. He then passed this driver in the bike lane as she was “driving like Miss Daisy.” While passing this driver the Hendrix came within a few feet of side swiping a bicyclist who was riding well within the bike lane. Hendrix then passed another car in the suicide lane after passing the bicyclist. As Hendrix started to weave back into the normal lane of traffic, he crashed into 71-year-old Cynthia Jonasen as she turned off Cantrill onto Second Street.

Mrs. Jonasen died almost immediately from her injuries. Hendrix also had his domestic violence victim, her three minor children, her sister, her sister’s young child, and three dogs in the car that he was driving. All of the people in his car were injured and at least two of the victims are still experiencing symptoms of those injuries.

A prior jury had heard evidence of two separate incidents of domestic violence that occurred in April and June of 2015. During the April incident, Hendrix placed his hands around his girlfriend’s neck and squeezed while lifting her off the floor. An argument between the two continued into the living room where Hendrix again placed his hands around her neck, strangling her on the couch. During the June incident, Hendrix used one hand to strangle his girlfriend as she was lying in their bed. She told a police officer that she did not lose consciousness but that she was unable to breathe for a period of two seconds. Hendrix later strangled her in the kitchen, this time with her sister looking on. The children were also present during these violent attacks. The Honorable Samuel McAdams found true the allegation of prior domestic violence incident in Sacramento County in 2011 as well as a prior strike conviction.

The jury in the most recent case found true the allegations that Hendrix suffered the same prior strike conviction for a felony first degree residential burglary in 2011. The jury also found true allegations that the Hendrix had served a prison term and that he committed the vehicular manslaughter while out on bail. These priors all serve to enhance his overall sentence.

Based on careful consideration of all the facts and circumstances of both cases the Honorable Paul K. Richardson sentenced the defendant to total prison sentence of 42 years and 4 months in the California State Prison.