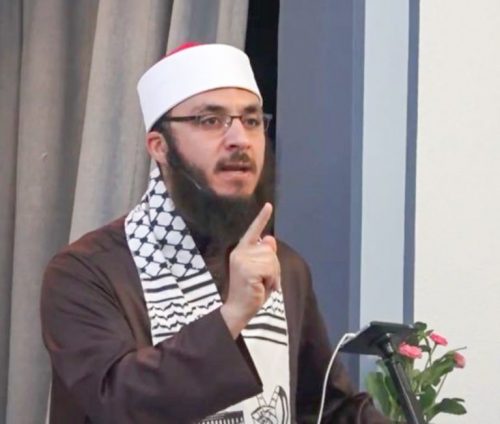 The sermon is very anti-Semitic and violent much like many sermons in the mosques of the Middle East.

In the sermon, Imam Ammar Shahin prayed in Arabic: “Oh Allah, count them one by one and annihilate them down to the very last one. Do not spare any of them” and “Oh Allah, liberate the Al-Aqsa Mosque. Oh Allah, make this happen by our hands. Let us play a part in this.”

This part was in Arabic. The rest of the sermon was in English.

It is not surprising that the imam/mosque are denying this and saying that it is incorrect or out of context. In fact, there were two different sermons from California mosques this week, both of them calling for destroying/annihilating the Jews.

MEMRI is a bipartisan, nonprofit organization and we are nearly two decades old. One of our most important projects is our Tom Lantos Archives on Antisemitism, named after Congressman Tom Lantos, the only Holocaust survivor to serve in Congress. Sadly, the content in these sermons is very common; this sentiment is in the culture of the Middle East. There are hundreds of examples that can be found on our website (www.memri.org) Over the years, when an influential person has been caught saying something in Arabic that we translated, they always make excuses and claim that it was mistranslated or taken out of context. But once they are caught they do not do it again, because they know that their words are being monitored and translated.

Everything that MEMRI does in our work at the Lantos archives and on Capitol Hill has support from members of Congress from both sides of the political aisle. We work very closely with members from

California, including Nancy Pelosi and Brad Sherman, who have both spoken at our events, and of course Tom Lantos himself was a representative from California. Our work is also supported by leadership ranging from John Kerry, Joe Biden, and Hillary Clinton to Paul Ryan, John McCain, and many others.

One of MEMRI’s flagship projects is our Reform Project; this project is entirely devoted to amplifying the voices of reformists, moderates, and liberal activists in the Middle East, and to working with leading Muslim reformists and imams who are bravely speaking out against the kind of incitement and hatred expressed this week by the California imam – and they understand this sentiment better than anyone else. Also, MEMRI’s Board of Advisors has a number of prominent and influential Muslims on it.

It should be noted that over the past two years we have translated sermons in Canada, Germany, Belgium, Australia, Spain, Italy, and Denmark that have included statements and quotes that are almost identical to those in the California sermon – and this has led to criminal cases against these imams. These sermons and others like them are inciting to violence for killing Jews. The two CA imams did not say Israelis, and they did not say Zionists. They said Jews. Anyone defending the imams and the statements coming from these mosques and attacking MEMRI for bringing them to light are excusing the worst form of antisemitism, and, in fact, justifying violence.

It is unfortunate that this is the sentiment in the Muslim world. If you turn on Arab TV you will see such antisemitism expressed by some of the most influential imams in the region. Sermons like these are common in some of the most important mosques and Islamic centers. This hatred can also be found in schoolbooks throughout the region. The content in these sermons is extremely common.

Steven Stalinsky is Executive Director of Middle East Media Research Institute (MEMRI).  The group’s goal is to “bridge the language gap between the Middle East and the West.”