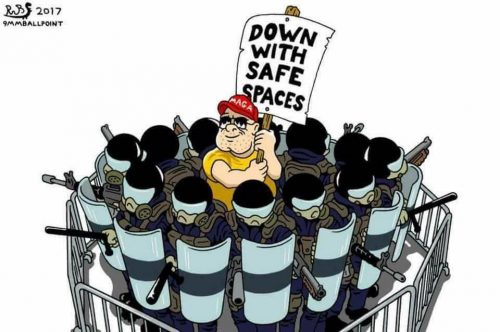 At this point there have been numerous pieces written about “free speech,” both as a legal concept and as a principle, as a result of controversies over scheduled public appearances by Milo Yiannopoulos, Ann Coulter, and other similar speakers. But one piece, written by an ACLU Senior Staff Attorney and posted by The Davis Vanguard on April 28, 2017, raises some new points (and plenty of old ones) that should be addressed.

I’d like to start off by saying that, given legal and structural restrictions within our current society, the ACLU does plenty of good work defending people’s rights and I’ve been donating to them monthly for quite some time now, but something the organization as a whole (and quite possibly many of their members, lawyers, etc. as individuals) doesn’t seem to fully appreciate are the nuances around both the principle and the legal extent of free speech (in the case of legal matters it’s highly probable that their lawyers do understand such things but have a very particular interpretation of them which isn’t shared by everyone).

For instance, they abide by a fairly strict interpretation of the Constitution when it comes to gun rights and the Second Amendment, stating that while “particular federal or state laws on licensing, registration, prohibition, or other regulation of the manufacture, shipment, sale, purchase or possession of guns may raise civil liberties questions” it’s still their position that “given the reference to ‘a well regulated Militia’ and ‘the security of a free State,’ . . . the Second Amendment protects a collective right rather than an individual right.”

However, a strict interpretation of the First Amendment would seem to imply that only the government is legally prohibited from engaging in censorship (and even that has been interpreted by many to include certain exceptions) while private citizens and communities have every right to restrict speech that occurs within their purview, often using their own free speech rights to do so.  In fact, one could easily argue that it would be a violation of the First Amendment for the police (government agents) or public universities to prevent private citizens and communities from taking such actions.  But the problem with this simplistic, liberal analysis of free speech goes beyond the law and gets into the broader ideas and philosophy behind it.

For example, the common claim that “truly free speech means the best ideas will win out” might make sense in a vacuum but fails to hold in a society full of preconceived ideas, cultural norms, and

social pressures.  Essentially, people are often inclined to readily accept things that reinforce what they already believe and quickly dismiss things that challenge their current beliefs.  When one combines this fact with a society, like ours, that’s rooted in oppression, bigotry, and the dehumanization of certain groups it becomes clear that using “discourse” to effectively counter arguments which feed into such violence is far more difficult than many people would like to think.

Additionally, in both school settings and society at large we must ask ourselves who gets to determine “when speech crosses the line into targeted harassment or threats or creates a pervasively hostile environment for vulnerable students.”  This goes back to questions of power and where the free speech line should be drawn as I and others have discussed previously (see several of the links above and two below).  These are important questions that deserve rigorous debate but we must resist the urge to defer automatically to the opinions of those with very particular, limited, and privileged perspectives on such things (like the Supreme Court).

It should also be acknowledged that regardless of one’s position on the larger issues at play here, even by more conventional, restrictive definitions Milo’s public appearances are notorious for “targeted harassment [and] threats” against students and faculty, including trans and undocumented students.

On the specific topic of schooling, students’ rights are regularly infringed upon from “kindergarten to post-graduate studies” in a multitude of ways, not least of which involves the so-called “discipline” process.  This doesn’t just occur in the younger grades, though it’s extremely prevalent there, but happens in high school and college as well.  I won’t spend any more time discussing this subject because the examples are plentiful, the problems are intersectional (and sometimes subtle), I don’t have much knowledge or personal experience with these things, and it’s worthy of its own article(s) (or book(s)) but it’s a relevant point that I felt should at least be mentioned in this context.

A related point is the patronizing and inaccurate notion that college exists before “true adulthood.”  College is certainly a transition period for many but there are a variety of experiences both during and after college which makes it ridiculous to assert, as so many do, that there’s a stark difference between one’s life just before and just after graduating.  Furthermore, part of being an adult (in America and elsewhere) is having difficult and nuanced discussions about important political and philosophical topics that aren’t restricted to binary dichotomies.

As a self-described “college professor and university administrator with over two decades of direct experience of campus politics,” someone who I would have expected to embrace a more surface-level understanding of free speech as countless university administrators across the country have done, said in a New York Times op-ed “it has been regrettably easy for commentators to create a simple dichotomy between a younger generation’s oversensitivity and free speech as an absolute good that leads to the truth. We would do better to focus on a more sophisticated understanding, such as the one provided by Lyotard, of the necessary conditions for speech to be a common, public good.

“This requires the realization that, in politics, the parameters of public speech must be continually redrawn to accommodate those who previously had no standing.”  The author of this piece is “not overly worried that even the shrillest heckler’s vetoes will end free speech in America. As a scholar of literature, history and politics, [they’re] especially attuned to the next generation’s demands to revise existing definitions of free speech to accommodate previously delegitimized experiences.”

Perhaps it’s the ACLU that needs to rethink its stance on the nature of free speech and analyze the subject in a manner fit for a critical college classroom.  I await their assignment.

Connor Gorman is a fourth year graduate student in physics at UC Davis and a head steward in the Davis chapter of UAW Local 2865, the union that represents Academic Student Employees across the UC system

Share:
Tags:ACLUFree SpeechMilo Yiannopoulos
Previous : Sunday Commentary: Should We Create Places in Town for People with Fewer Cars?
Next : Monday Morning Thoughts: Davis Economic Development Scene – The Promise of 2014 and the Reality of 2017