Mike Hart of Sierra Energy is thinking outside of the box as he figures out creative ways to try to connect his Research and Development Center at Area 52 off Research Park Drive to campus.  He came up with the idea of a 3000-foot-long pedestrian bridge, 20 feet wide and about 20 feet in the air.

ViadUCD would connect UCD to the Davis commons, the Nishi property, the proposed conference center and then to Sierra Energy Research Park (SERP) and Area 52.

“This came about because of my involvement in the Nishi project,” Mike Hart told the Vanguard during an interview at Sierra Energy.  “We were trying to figure out best access routes, how do you connect things.

“The things that you really want to connect right now is the University, Downtown, Nishi, the potential Convention Center and the South Davis Research area,” he said.  He said, “I was trying to figure out how to connect it,” and while there is a bike path, he said, “if you walk it as I do, it’s not a good place for pedestrians.  It’s just not a good solution.

“The idea was why can’t we just have a pedestrian overcrossing stretching from the university connecting all these different points,” he said.

One thing that came to mind for him was the New York High Line.  The High Line, he explained, was an old railroad that went through all of Manhattan.  The railroad was pulled out years ago but they put in a walking path with lights and a pedestrian path and some vegetation.

“They created a beautiful place for people to walk,” he explained.  “They got people up and away from traffic, and they’re now slowly connecting it to buildings along the way.”

In Davis, this corridor has so much traffic, between the congestion of Richard Boulevard, and the freeway is really challenging.

Mike Hart was looking to connect his facility, Sierra Energy Research Park and Area 52 to the university.  His idea would have various stops where people can access the platform, “so they can safely get from place to place around town.”

At the time he originally started thinking about this, he thought he could tie in to the new convention center proposed on Richards at the University Park Inn, where people would then be able to

connect to campus and other areas as well.

Mike Hart is working with the university to purchase a large parcel next to the Sierra Energy facility in order to put in a parking lot.  That parking lot would be in easy walking distance of the Convention Center and could solve the parking issues for that facility as well.

“That would give us adequate parking to finish the research park here,” he explained.  “It would also allow for people parking here at the Convention Center without people having to park on that side of the road.”

The question then became how much would such a project cost.  Mike Hart met with Clark Pacific, a large company that specializes in large overhead construction.

Clark Pacific came up with an estimate of $16 million.

Mike Hart is thinking 20 feet wide, wider than the High Line, “because one of my thoughts had been, one way you could pay for it is you could put little shops up there.”  People walking on the bridge might want a cup of coffee or a bite to eat.  He thought this might be a way to service a bond.

“With value engineering we may find that we can bring (the cost) down,” he said. 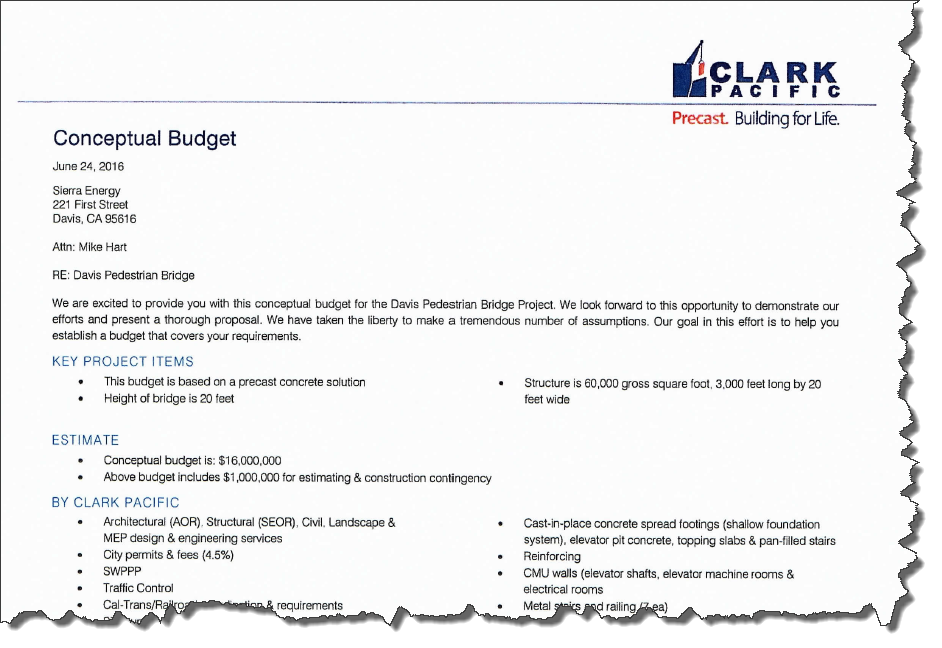 Mike Hart first came up with the idea last year, but he’s been waiting for a resolution on the Nishi Project to find out what is going to go up in that part of the city.

“The Nishi project really isn’t the primary driver,” he explained.  “The driver is to tie the campus-downtown and this convention center in the middle, altogether in one system.”

The bridge would have to go over both the railroad tracks and I-80.

Mike Hart explained that, in terms of the elevations, in both cases “we are well over the clearance range for (the PUC requirement).  We are at the same height as other existing crossings on the same track.  It would still have to be built to Union Pacific Standards.”

He said, “They are by no means a treat to work with.  I work with them all the time with the railroad.  As long as you stay safe, stay out of their working space, you won’t have a problem.”

But he said, “CalTrans is obviously more difficult.  But again they have the same requirements.”  He pointed out that “they have pedestrian bridges up and down the freeway.

“If it took pedestrians and gave them a safer way to cross, I don’t see why they wouldn’t be interested,” he said.

Mike Hart explained that this is an idea “that could be very cool.  It could provide a spine to a larger issue for Davis.”  He sees this as a way to get people from the “wrong side of Olive Drive” across Richards as well, if they extended the project toward the east.  On the other hand they could extend it across Richards on the south end to be able to reach the University Research Park.

But as yet, he has not had those conversations with either the city or other businesses to gauge their interest or support.

He is thinking you could put in some shade and plantings.  “You could make this really something signature for Davis,” he said.  “It’s an idea.  I’m just kind of sharing it with the community.  If people find this useful it would require some entity more involved than I am to take it to the next step.”

27 thoughts on “Could a Pedestrian Bridge Connect Campus to Innovation Centers?”