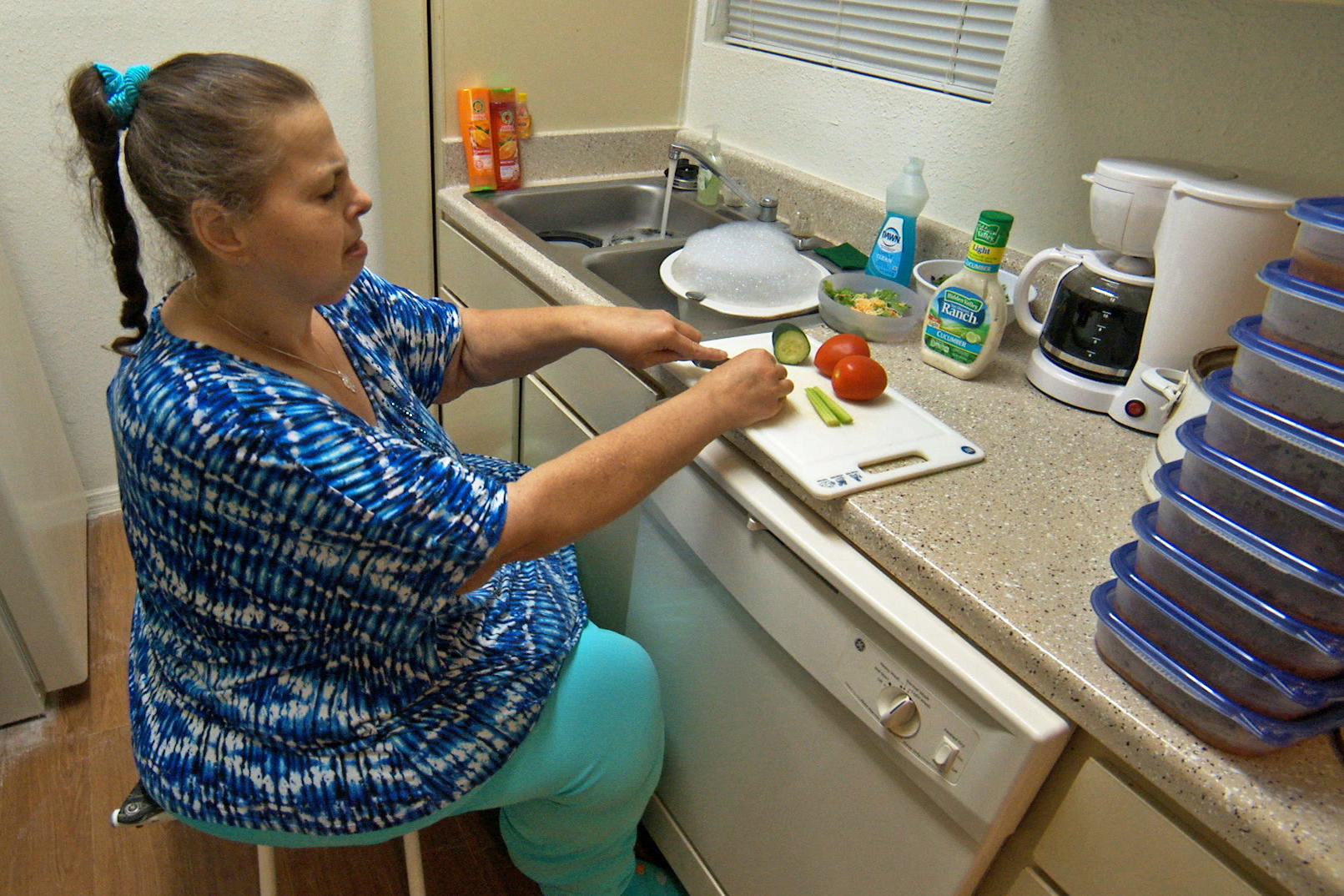 Although Sacramento native Pauline Potter once held the Guinness World Record for being the heaviest woman on Earth, she now stands at a much healthier 280lbs. At the time that record was broken in 2012, Pauline weighed 703lbs. Shortly after taking on the title of the largest woman in the world, she sent a video to Dr. Drew pleading to for help to lose weight, and was featured on multiple talk shows across the nation.  Just a year later, the 100lb slimmer Pauline achieved viral fame after publically divulging her weight loss method. Yet to have gastric bypass surgery, Pauline attributed her newfound weight loss to numerous sex marathons with her ex-husband Alex. The same man who Pauline blamed her massive weight gain on during their nine-year relationship.  Alex, a self-described “feeder” encouraged Pauline to gain weigh to fulfill his sexual preference for obese women.

Her interview with a UK magazine quickly spread around the world as a viral meme, as Pauline was quoted as saying “I can’t move much in bed, but I burn 500 calories a session. It’s great exercise just jiggling around. My bed is strengthened and, although I can’t buy sexy lingerie, I drape a nice sheet over me.” 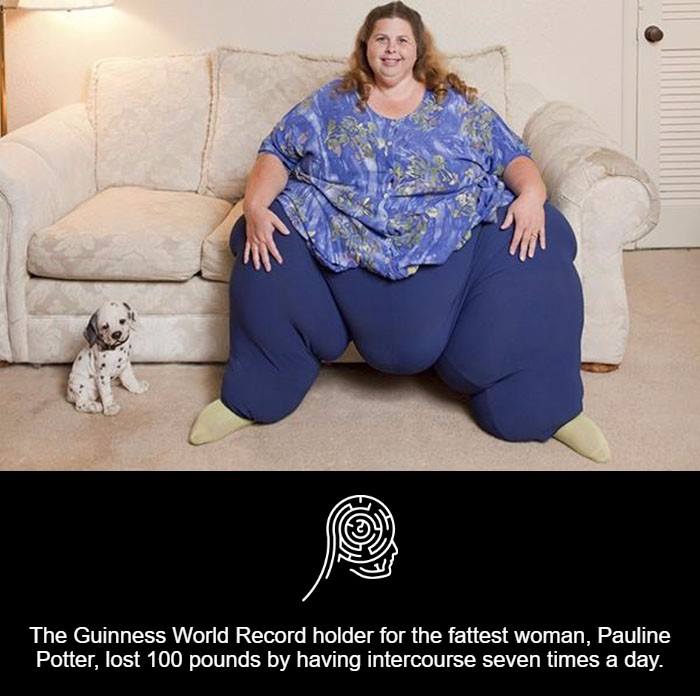 Shortly thereafter, Pauline joined the cast of “My 600lb Life,” a TLC documentary series that follows the weight loss journey of individuals categorized as “super morbidly obese.” When Pauline first weighed in, she could only stand for a few seconds at a time and relied on her motorized scooter to get around – a crutch that would later become a point of contention between her and famous bariatric surgeon Dr. Nowzardan. The first installment of the show found Pauline living in her Alta-Arden apartment with her eighteen-year-old son Dillon, whom she relied on to dress, fed and care for her daily.  Often confined her to her bed due to pain, Pauline stated, “I hear children running outside my window, laughing and playing. But nobody knows I’m here. I want to get out.”

Like other participants featured in the show, Pauline suffered severe trauma as a result of her problematic childhood. A victim of food insecurity, her Sacramento upbringing was peppered with bouts of hunger and instability. The experience imprinted on her a survivalist adaptation which led to her food addiction.

In the hope of being approved for weight loss surgery, Pauline moved to Houston to be closer to Dr. Nowzardan, who gave her the ultimatum of losing 50lbs in order to be eligible for the gastric

bypass surgery. Unfortunately, Pauline only gained weight in her follow-up appointments. She became a target for critics when footage showed her disregarding the doctor’s orders, ignoring her diet plan, and forcing her son to bring her fast food in bed. She states, “I’m not really worried about how many carbs I’m eating or anything like that. The doctor can’t tell me what’s good for me because I know my own body.” In another scene, Pauline tells Dr. Nowzardan that no one ever followed up with her in aftercare which is why she gained weight. In dispute, he gets the aftercare specialist on the phone, who confirms that they tried contacting Pauline several times but she refused treatment, saying, “I don’t need your help.”

After multiple attempts at losing weight to no avail, Dr. Nowzardan threatens to release her as a patient due to noncompliance but finally has her admitted to the hospital and put on a controlled diet. Upon noting her unwillingness to move or try to walk, Dr. Nowzardan began to suspect Pauline had developed a dependency on pain medicine, which would explain a newfound ulcer which had begun to develop in her stomach.

The doctor and patient butt heads numerous times throughout the series, as Pauline has been dubbed by viewers as one of the worst patients on the show.

The most recent installment of the series shows Pauline heading in the right direction, as she rang in 2017 at a much slimmer 308lbs. Her smaller frame now allows her to stand longer, as she enjoys a newfound sense of freedom which has liberated her from her dependency on her son. Nonetheless, the episode quickly spirals into familiar waters, as Dr. Nowzardan is once again scolding her for gaining 20lbs when she was supposed to have lost that amount. It additionally highlights her personal struggle with excess skin in the aftermath of her near 400lb weigh loss – a problem many formerly obese people encounter after shrinking in size. After she made another 180 degree turn and returned to her weight loss regime, the doctor finally scheduled her for skin removal surgery.

The series plans to follow up with Pauline in one year’s time to chart her progress and see if she’s managed to reach her goal weigh of 180lbs.

This is not the first time an obesity documentary has featured Pauline. The British television series “Supersized, Superskinny,” which sends overweight people to live with larger counterparts as a scare tactic, featured Pauline in their fifth season. An English woman was sent to live with Pauline for a short period to observe her lifestyle as a forewarning about massive weight gain. During their time together, Pauline takes her to her favorite Sacramento restaurants, including Pancho’s Mexican Food on Broadway. Pauline exposes the harsh realities of life inside a 600lb body, including but not limited to debilitating knee pain and excruciating lymphedema – a collection of fluids that gather in the body as a result of obesity.

No longer the world’s fattest woman, Pauline has shared her struggles openly on her Facebook page, and is proud of her progress. Although she still gets an array of negative comments and feedback from viewers, she says she’s doing the best she can and is determined to pursue a healthy lifestyle for her and her son.

Share:
Previous : My View: What Will Certification Mean for MRIC?
Next : Sunday Commentary: Should the DA Drop the Charges against the Picnic Day 5?