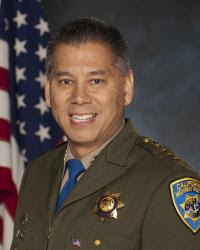 Interim Chancellor Ralph J. Hexter has appointed Joseph A. Farrow to be the next UC Davis chief of police. Hexter made the selection in coordination with Chancellor-Designate Gary S. May.

Farrow has served as the commissioner of the California Highway Patrol since 2008, under former Gov. Arnold Schwarzenegger and current Gov. Jerry Brown.

“Joe Farrow has more than 37 years of public safety service, and our campus will benefit in numerous ways because of his leadership, commitment and experience,” Hexter said. “He’s excelled in fostering trust, developing innovative programs and building support with diverse communities. We are eager for him to advance the tremendous efforts we have made over the last several years.”

In his role as CHP commissioner, Farrow has led more than 11,000 employees who are part of one of the nation’s largest law enforcement agencies. In his long career with the CHP, he has held every rank since graduating from the CHP Academy in 1979. His distinguished career began as a police officer in the small California city of Pacific Grove.

He is a graduate of the FBI’s National Academy and National Executive Institute. He is also a member of the International Association of Chiefs of Police and has served as the chair of its Officer

Safety and Highway Safety Committees. Farrow was appointed by former California Attorney General Kamala Harris to the California Racial and Identity Profiling Advisory Board, and he is a member of the University of Southern California Safe Communities Institute and the California Peace Officers’ Association. He was appointed by the governor to be California’s representative to the National Consortium for Justice Information and Statistics.

Farrow has received numerous awards, including the J. Stannard Baker Award for Outstanding Achievements in Highway Safety, the Outstanding Criminal Justice Professional Award from the National Alliance of Mental Illness, and the Special Award of Recognition from the National Organization of Black Law Enforcement Executives. He also received the president’s award from the Asian Pacific State Employees Association.

As the UC Davis chief of police, Farrow will have oversight over 80 full-time employees and 50 student employees at both the Davis campus and the university’s medical center in Sacramento.

Farrow succeeds Matt Carmichael, who served as police chief for five years and retired from the University of California in September 2016. Lt. Jennifer Garcia has been serving as interim chief of police since then.

“I would like to thank Jennifer Garcia, who has served as the interim chief since September. She has done a remarkable job during this time and we are grateful for her continued service to the department,” Hexter said.

Farrow will begin his position as UC Davis chief of police in late August or early September, pending comprehensive background checks that are mandated for police personnel.