A few weeks ago, the city council had a joint discussion with the Planning Commission which, among other things, discussed housing needs.

One of the ideas put forward was to pursue a healthy vacancy rate, which they set at five percent rather than the current rate of 0.2 percent (or 24 units).  One goal was “recover” single-family home rentals by five to 10 percent  – 242 to 485 of the 4850 single-family homes that are currently being rented.

The city staff calculated that it would take about 816 to 1059 new apartments to meet existing needs.  The vacancy rate of five percent would represent about 574 more apartments.  For some that was a low number, as they believe existing demand to be a good deal higher than that.

And that existing need “does not account for general community growth or anticipated demands on city units associated with UC Davis enrollment growth.”

Following yesterday’s discussion of the housing market, Dave Taormino, a real estate broker as well as a developer, forwarded to the Vanguard his letter to council and the Planning Commission regarding the projected housing needs.

He calls it his view “of the realistic housing needs for the City in the next SACOG period.”

Part of the problem, he argues, is that SACOG (Sacramento Area Council of Governments) does not take account of all needs.

For example, “SACOG assigns ALL UC Davis student, faculty and staff population increases entirely to UC Davis or unincorporated Yolo County and nothing to the City of Davis and therefore excludes

those increases from Davis’ housing allocation.”

Second, he points out, “Yolo County currently, believe it or not, has zoned land in Dunnigan, Madison, Esparto, and Knights Landing that could accommodate building homes and apartments for UC Davis students, faculty and staff.  In the next year or two when the SACOG period starts for Yolo County, zoned land in Dunnigan and Knights Landing is intended to be substantially reduced according to the County Planning Department.

“Essentially SACOG doesn’t consider whether the zoned areas in Yolo County are feasible and practical for UC Davis related individuals only, that zoned land exists on paper which perspective also applies to Davis.”

Mr. Taormino writes, “From all appearances much of the student housing need will be accommodated on campus and perhaps via a modified Nishi, but that leaves 2,500 faculty and staff and the existing apartment shortage left to Davis to provide along with its other internally generated population increases.”

He adds, “Are the incoming UC Davis faculty, staff and students to be part of the ‘Davis Community’ or not?  If not, then the City’s leadership should articulate and publicize its reasons and decision.

“If so, then Davis should develop a plan of action that actually provides housing opportunities for students as well as faculty and staff somewhere; in the City, on campus or in concert with some other city nearby.”

Here is his chart: 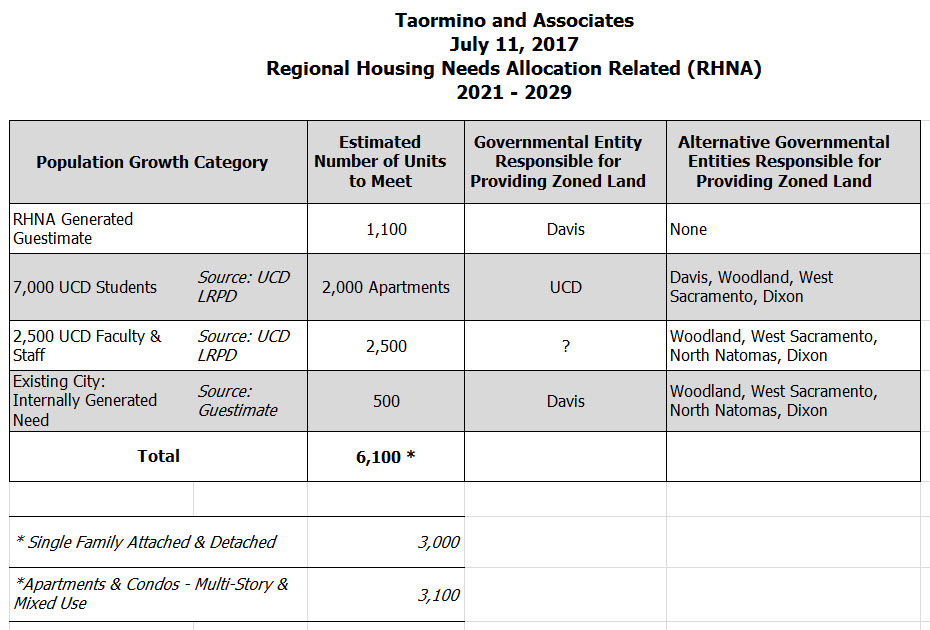 76 thoughts on “Are We Underestimating Housing Needs?”