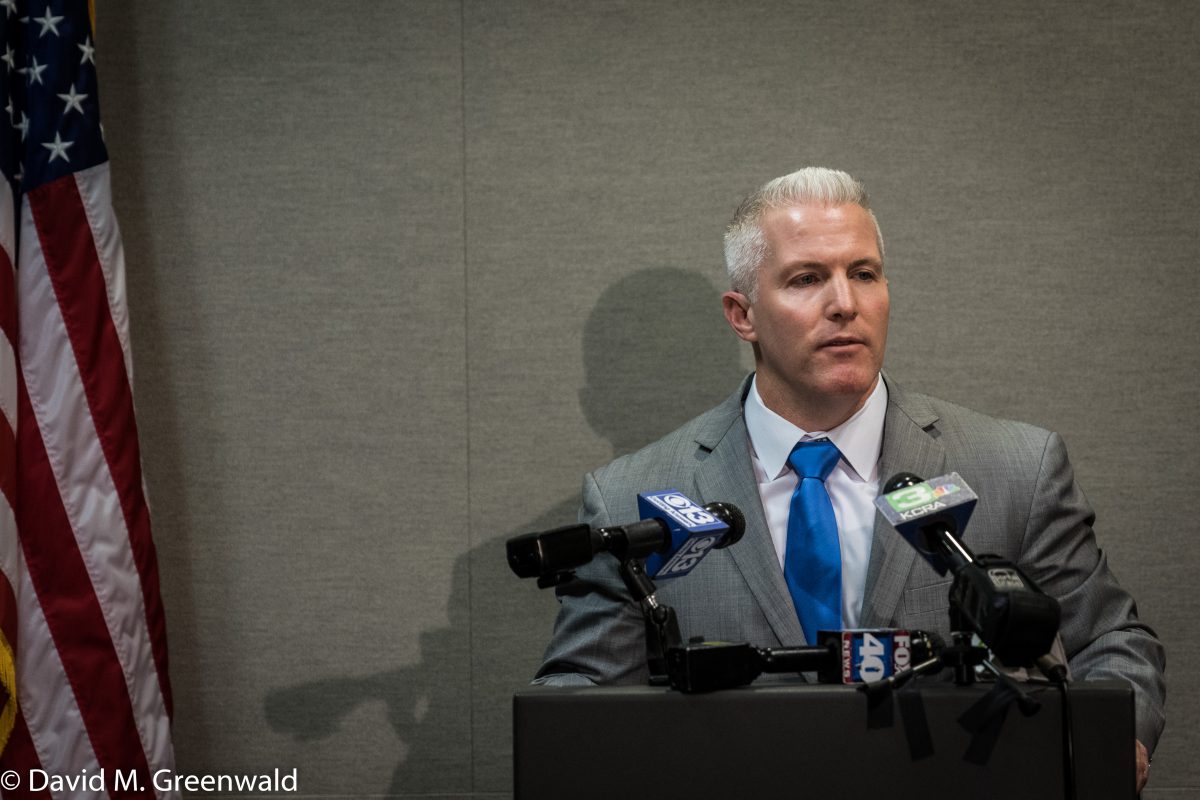 ACLU of CA launches statewide campaign to educate Californians on the role of district attorneys, the power they wield, and their impact on mass incarceration

(From Press Release) – The American Civil Liberties Union of California (ACLU-CA) and local partner organizations today launched Hey, Meet Your DA!, a campaign designed to raise awareness about the powerful role district attorneys (DAs) play in the state’s 58 counties, and to increase accountability and transparency within the offices. The campaign features an interactive website, a report that highlights how out of step many DAs are with voters on criminal justice reform measures, and an animated video narrated by award-winning singer/songwriter and founder of FREEAMERICA, John Legend.

“District attorneys are among the most powerful elected officials in local government,” said Ana Zamora, criminal justice policy director with the ACLU of Northern California. “The decisions they make impact the lives of millions of people, including families and entire communities. Many Californians may not know who their DA is or the role they play in the complicated ecosystem of the criminal justice system. We want to change this dynamic and it starts with introducing them to their locally elected DA.”

Through the campaign site www.MeetYourDA.org, interested groups and voters can quickly find out who their DA is and where they stand on the issues. The site connects Californians to their district attorney with an easy zip code search and other interactive features, including a tool where constituents can email their DA directly, a feature currently not available on any advocacy platform. In addition, the website has a profile on every DA in California and tracks their public positions on four criminal justice ballot measures that have passed since 2012.

“For decades district attorneys and prosecutors have been the primary drivers of America’s devastating mass incarceration problem, operating with little transparency,” said Bill Cobb, deputy director of the ACLU’s Campaign for Smart Justice. “This campaign is important, because it’s imperative that voters in California are equipped with the information and tools they need to effectively engage their district attorneys and know how to hold them accountable for problematic practices and unjust systems.”

John Legend collaborated with the ACLU of CA as part of his #FREEAMERICA campaign to help end mass incarceration. “District attorneys are important players in our fight to end mass incarceration and put a stop to the racial bias that keeps disproportionate numbers of people of color in the criminal justice system,” said Legend. “When we aren’t paying attention, their power goes unchecked. So it’s up to us to hold them accountable, which starts with getting to know them.”

In partnership with Harvard Law School’s Fair Punishment Project, the campaign also released a report, “Meet California’s District Attorneys” that analyzes the public positions DAs from the state’s largest counties have taken on four successful criminal justice ballot measures that passed in the 2012, 2014 and 2016 elections. The report compares these public positions to the final vote in each county, and notes how out of step many of these locally elected leaders are with their constituents.

“Based on our analysis, California’s DAs have opposed reforms aimed at reducing the jail and prison population while their constituents have repeatedly voted in favor of these essential reforms,” said Jessica Brand, Legal Director of the Fair Punishment Project. “We hope this report will enable voters to learn more about the positions of their elected DAs so that they can hold them accountable when they adopt policies that are not in the best interest of the communities they serve.”

I WHAT IS A DISTRICT ATTORNEY?

The district attorney’s job is to seek justice in criminal cases, work to prevent crime, and serve as a leader in the diverse communities they represent. The DAs are also elected officials, which means they are ultimately accountable to the voters. In California, we have 58 elected DAs each representing one of our 58 counties.

The power of California’s DAs extends into the courtroom through their decisions in individual criminal cases and all the way up to the State Capitol through their tremendous influence on statewide criminal justice policy. In one way or another, DAs are responsible for decisions that affect the lives of millions of people, including families and entire communities.

If someone is accused of committing a crime, it is not the police but the DA who has the sole power to decide if criminal charges are filed and the severity of those charges. They alone decide who is deserving of a jail or prison sentence by deciding to file felony charges, who will instead be routed into a diversion program designed to help them rebuild their lives, and who will have charges dismissed.

DAs also have powerful platforms from which to influence statewide policy. During the legislative session, DAs and their representatives are often seen roaming the halls of the Capitol lobbying state legislators on important criminal justice policy. The California District Attorneys Association (CDAA) has a powerful lobbyist in Sacramento. In addition to legislation, DAs often weigh in on statewide ballot measures.

Over the last several years, the country has seen a significant move away from the antiquated and ineffective “tough on crime” approach, with bipartisan support moving toward “smart on crime” policies. Voters and policymakers alike increasingly understand that the ruthless and senseless mass incarceration fervor sparked in the 80s and 90s with the War on Drugs has come at great human and taxpayer cost, including wreaking devastation to the well-being, economic security, and safety of low income communities and Black and Brown communities.

Nowhere have the harsh effects of mass incarceration been more visible than in California, where we spend $75,560 per person in state prison each year and lock up around 130,000 people.1 The gross racial disparities in California’s incarceration regime are reflected in the fact that while Black and Latino people are only 6% and 38% of the state population, they make up 27% and 41% of its incarcerated population.2 Since the 2012 election, California voters have passed four ballot measures designed to roll back the tough-on-crime policies of the 90s that contributed to a seven-fold increase in the state’s incarceration rate.3

Each of the ballot measures promised to reform a unique piece of our complicated criminal justice ecosystem. The people of California have emphasized that our previous system of harsh punishment and mass incarceration has not worked and have demonstrated a commitment to transformational change that prioritizes treatment, rehabilitation, and prevention over incarceration.

The voters have spoken, but did their elected DAs agree?

To answer this question, this report examines the election results of Prop 36 in 2012, Prop 47 in 2014, and Props 57 and 64 in 2016 in California’s nine largest counties—Los Angeles, Orange, San Diego, Riverside, San Bernardino, Alameda, Contra Costa, Santa Clara, and Sacramento— each with populations over 1 million and combined representing 70 percent of the total population in California. We then compare these county election results with the public positions taken by the elected DA of each county. We first examined district attorneys who took formal positions on the official ballot proposition websites. But DAs need not join an official campaign, such as “Say No to 47,” to influence the outcome. An elected DA’s statements to the press in support of or in opposition to a ballot measure can have enormous influence over both voters and legislators. We therefore also examined these statements to assess positions, looking at comments made in the news and other public statements. This analysis reveals that most locally elected DAs have opposed the reforms that their communities overwhelmingly supported. 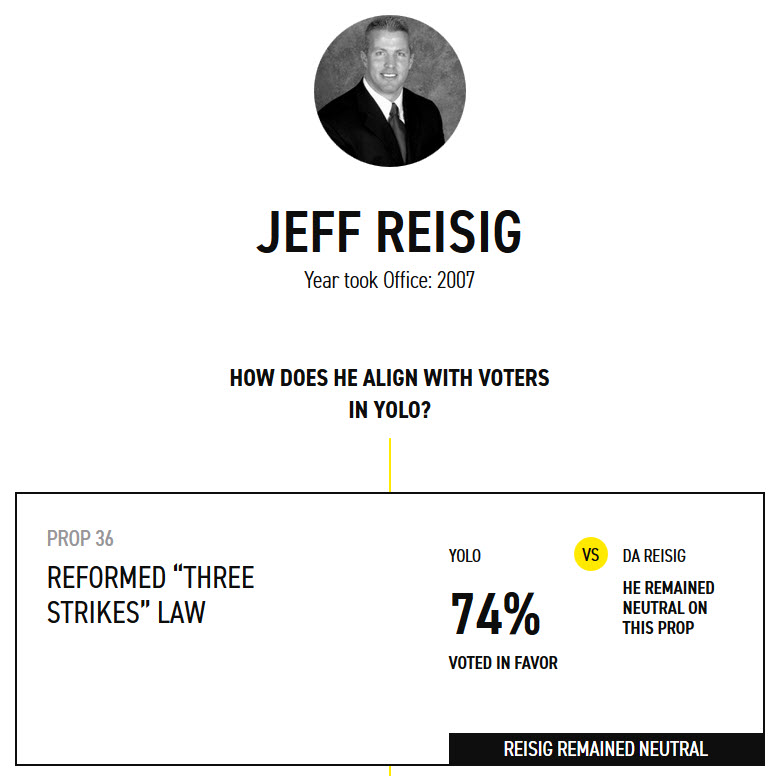 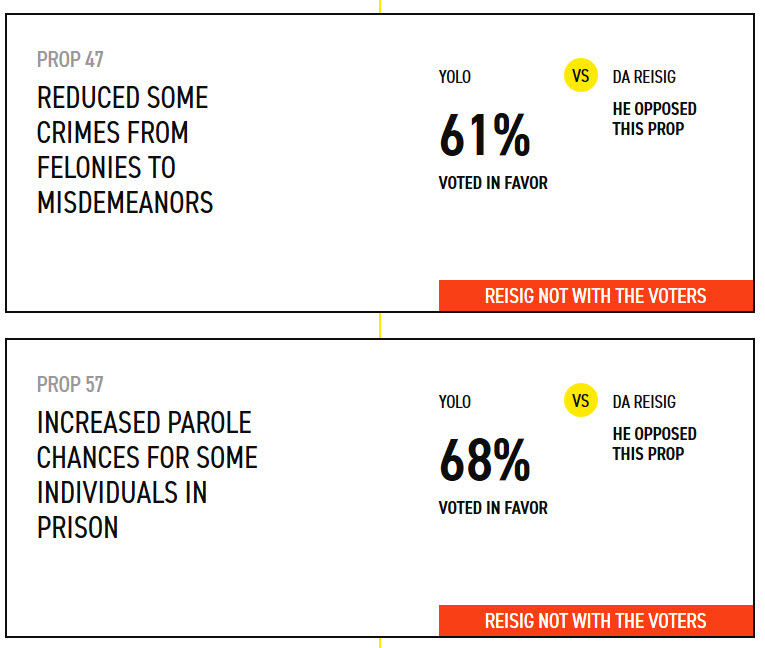 There can be no doubt that by 2010, California’s prison system was at a crisis point, burdened by skyrocketing incarceration rates and serious issues of prison overcrowding. The courts recognized it, politicians acknowledged it, and California voters both realized it and took action to change course. Voters repeatedly supported important reforms that have led to the release of people who fell victim to draconian sentencing policies and who can safely return home to their families and communities.

As this report demonstrates, however, locally elected district attorneys, vested with enormous discretion and political power, have consistently opposed popular and common sense reforms that are widely supported by their constituents.

The people of California have repeatedly shown support for reforms that put an end to harsh and outdated sentencing laws, reduce the jail and prison population, and prioritize rehabilitation. It’s time Californians demand that their elected district attorneys start listening and responding to the communities they were elected to serve.

IV WAYS TO USE THIS REPORT

We hope this report serves as a conversation starter between community based organizations and local district attorneys. Below is a list of a few specific ways it could be used. For more information, advocacy tools, or to get involved with the campaign, visit http://MeetYourDA.org and sign up!

Call for a Town Hall meeting between community members and the District Attorney in order to open a dialogue between the communities most impacted by the criminal justice system and the DA. After the first meeting, consider asking your DA for regular (quarterly) Town Hall meetings.

Request a meeting with your DA to share this report and other issues that you care about. This could include a meeting to ask your DA to take positions on pending legislation or ballot measures related to criminal justice reform. This is also an opportunity for your organization to talk about individual cases and overall sentencing trends within your community.

During election season, organize candidate forums and debates to pose questions to candidates to help educate the community about their platforms. This is especially important since most DA elections occur during the midterm primaries when voter turnout is historically very low.

Schedule a meeting with the Editorial Boards at your local newspapers to share the content of the report and let them know you are working to create greater channels of communication with your DA.