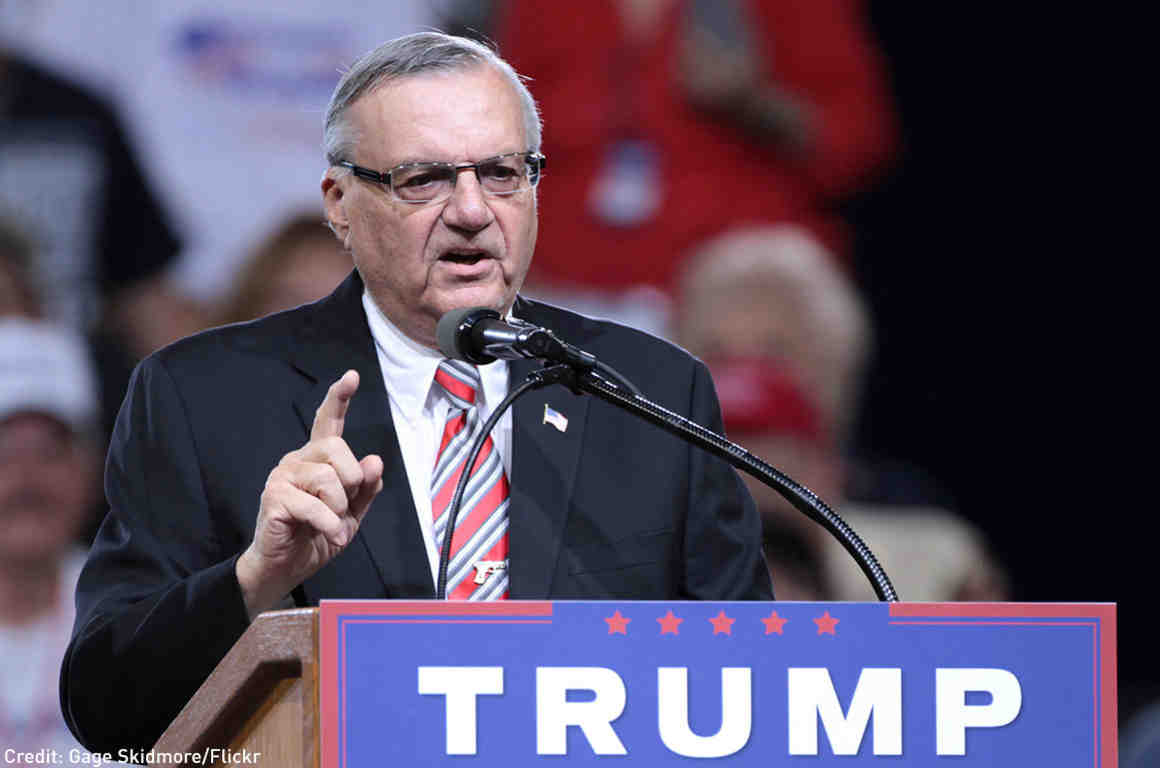 President Trump acted quickly after basically putting his cards on the table in a speech earlier this week in Arizona.  The president pardoned Sheriff Joe Arpaio, best known for his aggressive efforts to hunt down and detain undocumented immigrants – which made him a divisive figure in the politics of immigration and ultimately earned him a criminal contempt conviction.

The ruling stems from a lawsuit brought by Latino residents in Maricopa, Arizona.  These residents were able to successfully challenge the sheriff’s policies of racial profiling and illegal detentions.

However, Sheriff Arpaio repeatedly flouted court orders in that civil rights case, leading to both civil and criminal contempt rulings against him.

“I am pleased to inform you that I have just granted a full Pardon to 85-year-old American patriot Sheriff Joe Arpaio. He kept Arizona safe,” the president tweeted.  In a statement from the White House, he said Mr. Arpaio gave “years of admirable service to our nation” and called him a “worthy candidate for a presidential pardon.”

The president also called his conviction “a political witch hunt by holdovers in the Obama justice department.”

The ACLU Deputy Legal Director, Cecilia Wang, said, “With his pardon of Arpaio, Trump has chosen lawlessness over justice, division over unity, hurt over healing. Once again, the president has acted in support of illegal, failed immigration enforcement practices that target people of color and have been struck down by the courts. His pardon of Arpaio is a presidential endorsement of racism.”

California Attorney General Xavier Becerra said in a statement, “Former Sheriff and convicted criminal Joe Arpaio has shown America his true colors. He demonstrates an embarrassing contempt for the

rule of law by hiding behind a disgraceful pardon to escape the punishment our laws prescribe for lawbreakers. Donald Trump shares in that disgrace and contempt through his exploitation of the pardoning powers of the presidency. These cowardly acts of abuse of power are not the lessons our children should learn.”

The pardon was condemned by the Muslim civil rights group CAIR (Council on American-Islamic Relations), which said in a statement, “The unconscionable pardon of Joe Arpaio once again sends the troubling message that Mr. Trump sees himself not as president of the United States, but as the leader of a resurgent racist movement within our nation. It is even more disturbing that President Trump would use the cover of a potential natural disaster impacting millions of Americans to avoid public scrutiny of his reprehensible action.”

Normally speaking, a president has unlimited powers to pardon those convicted of a crime as laid out in the Constitution.  However, Northwestern Law Professor Martin Redish, in an op-ed this week in the NY Times, calls that into question in this case.

Professor Redish writes, “This is uncharted territory. Yes, on its face the Constitution’s pardon power would seem unlimited. And past presidents have used it with varying degrees of wisdom, at times in ways that would seem to clash with the courts’ ability to render justice.”

However, he suggests the Arpaio case is “different.”  He notes, “The sheriff was convicted of violating constitutional rights, in defiance of a court order involving racial profiling.”

Writes the professor, “Should the president indicate that he does not think Mr. Arpaio should be punished for that, he would signal that governmental agents who violate judicial injunctions are likely to be pardoned, even though their behavior violated constitutional rights, when their illegal actions are consistent with presidential policies.”

The question is what is the remedy.  And many would argue the only possible redress would be impeachment here.   As Professor Redish puts it, that is “itself a politicized, drawn-out process.”

Instead, he offers “another route.”  He writes, “If the pardon is challenged in court, we may discover that there are, in fact, limits to the president’s pardon power after all.”

He continues, “The only effective means courts have to prevent or stop governmental violations of constitutional rights is through injunctions. But injunctions have teeth only when they have the potential of a contempt conviction behind them. In other words, in issuing an injunction, a court is saying, ‘stop doing that or else.’ The ‘or else’ is a criminal conviction for contempt, leading to a fine, imprisonment or both. Absent the ‘or else,’ the injunction is all but meaningless.”

The professor continues, explaining, “But if the president signals to government agents that there exists the likelihood of a pardon when they violate a judicial injunction that blocks his policies, he can all too easily circumvent the only effective means of enforcing constitutional restrictions on his behavior. Indeed, the president could even secretly promise a pardon to agents if they undertake illegal activity he desires.

“In American constitutional democracy, democratic choices are limited by restraints imposed by the Constitution. The due process clause of the Fifth Amendment dictates that neither life nor liberty nor property may be deprived absent ‘due process,’ which the Supreme Court construes to require adjudication by a neutral judge.

There is a remedy to that and that is impeachment, but, as we have seen, impeachment is not only extreme but extremely partisan.

It is one man’s legal theory to be sure, and an untested one at that, but there is a logic to his point.

Share:
Tags:ImmigrationJoe ArpaioTrump
Previous : Keeping Hope in the Face of Hate
Next : Governor Brown Commits to Bail Reform, but Not in 2017

58 thoughts on “Analysis: Can the Pardon of Arpaio Get Overturned?”