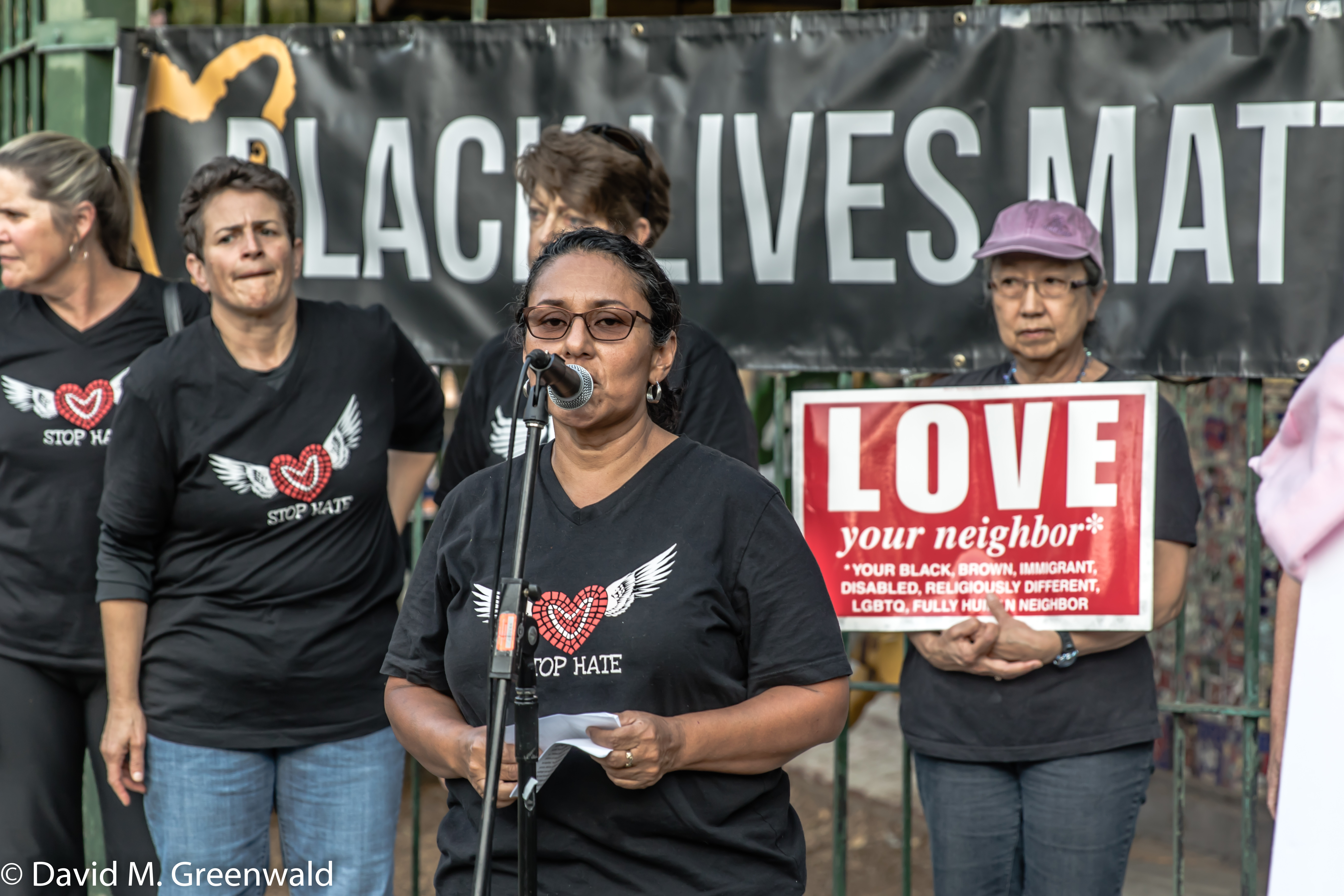 Someone sent me a copy of a news story done by ABC10 on the “unity rally.”  It juxtaposed Alan Hirsch, a Vanguard board member, who is handing out a variety of signs, against Bob Glynn and his wife.

The article reported, “The Glynns had come to the unity rally to show support for the local Jewish community in the wake of recent antisemitic remarks by an imam at a Davis mosque last month.”

However, “When the Glynns arrived at the rally, they saw the BLM banner and took offense. The Glynns said they feel the unity rally and signs of love don’t include them, as Trump supporters.”

“It’s only love if you’re on the left,” Sylvia Glynn said. “That’s how I’m feeling.”

There is a legitimate point that was brought up here, and I was thinking about it as I stood there covering the rally on Wednesday night.  This was really a “Unite the Left Rally” – in counterbalance to the “Unite the Right Rally” in Charlottesville.

While there was a lengthy discussion on the Vanguard about the statues, I’m kind of surprised that some of the other comments didn’t draw far more attention.

For example, John Garamendi, the area’s congressional representative, said, “This is no place for that kind of bigotry.”

“Speak the words, Mr. President,” the congressman said.  “And if you can’t, then get the hell out of that office.”

It was another poignant moment for Mayor Robb Davis, who called us to task for having to receive “a wake-up call to the fact that hatred still exists.”

The mayor was able to own his white privilege and the fact that he could ignore hatred and inequality: “All of those things are the basis of a systemic racism that exists in this country and I had

the privilege for many years just to ignore it.”  He said he’s lived a good life, “but all around me there are people who were experiencing a different reality and they still are.”

Chancellor Gary May, in his first real appearance as UC Davis’ new chancellor, didn’t miss the chance to declare that “he is who you thought he was.”  He then said, “There were not many sides, there were only two – there was good and there was evil.”

This was not a rally that was to bridge the political divide.  Rather, this was the mainstream left in this community going on the attack.

It was interesting to see Mayor Davis, Congressman Garamendi, and Chancellor May speaking proudly under a banner of Black Lives Matter.

But what is clear is that this was not a rally for the Bob Glynns of the world.  This was an anti-Trump rally, even if it was not billed as such.  His comments on Charlottesville were condemned and ridiculed.

This was a left-critique of white supremacy.  There was even some sprinkling of far left and even radical.  While Mayor Davis acknowledged his white privilege and attacked its foundations by arguing for people of color, he said that “these things have never gone away” and we have simply traded one bad institution for a new one.  And in homage to Michelle Alexander’s radical critique of American society, the Davis Mayor stated, “We traded Jim Crow for mass incarceration.”

It is only because this critique has gained so much ground that we no longer recognize just how radical Michelle Alexander’s “New Jim Crow” critique of American society actually is.

Kate Mellon-Anibaba took it a step further when she argued that “the images of white men holding torches, spewing hate and physically hurting people… this is easy to denounce and separate ourselves from…”

But that is not enough, she argued.  It is not enough to be “the “‘good’ white people.”  She argued that “we have an obligation to do work here in this community and surrounding areas.”

The irony is that this week on the Vanguard, a guest writer compared the hatred of the neo-Nazis and the KKK to that of Black Lives Matter.

She doubled-down on it, calling BLM a “hate organization” and saying “BLM advocates hate and violence against all police.”

Black Lives Matter, of course, offers a radical critique of American society, particularly policing, but as Natasha Minsker of the ACLU pointed out at the 2016 MLK Day event in Davis, the police have “been used as a tool of racial oppression in this country from the very beginning.

“Think about that, one of the first laws in our country gave the police the power to kill black people for resisting white oppression,” she said.

That notion has continued today in the New Jim Crow critique of the legal system.

“Today we have a system where the criminal justice system operates as a massive instrument of control for people of color, particularly for African Americans and Latinos,” Natasha Minsker said.

BLM offers a radical vision for sure, and they do so with a good deal of venom, but they also offer a very valid critique that the laws in this country are implicitly race-based and the police are the enforcement arm of the government’s supremacy over people of color.

Some of my more radical colleagues were upset that going after Charlottesville was an easy target.  They were unhappy that speaking under a Black Lives Matter banner, they failed to take on police brutality.  I think Kate Mellon-Anibaba’s point here is well-taken, but I think, at the same time, what you are seeing is a wider acceptance of the more radical critique of American society.

Where does that leave the Bob Glynns of the world?  Well, they live in a community that voted 85 percent last November against the president.  We live in a divided nation and this unity rally was clearly not meant to embrace red Americans from deep blue Davis.

That’s where we are in this country and the sooner we acknowledge that – and either accept it or try to change it – the better.

Share:
Previous : We Need to Fight for Justice in Charlottesville and in Davis
Next : What Ever Happened to Mass Incarceration Reform?

45 thoughts on “Commentary: Just What Is a Unity Rally Anyway?”