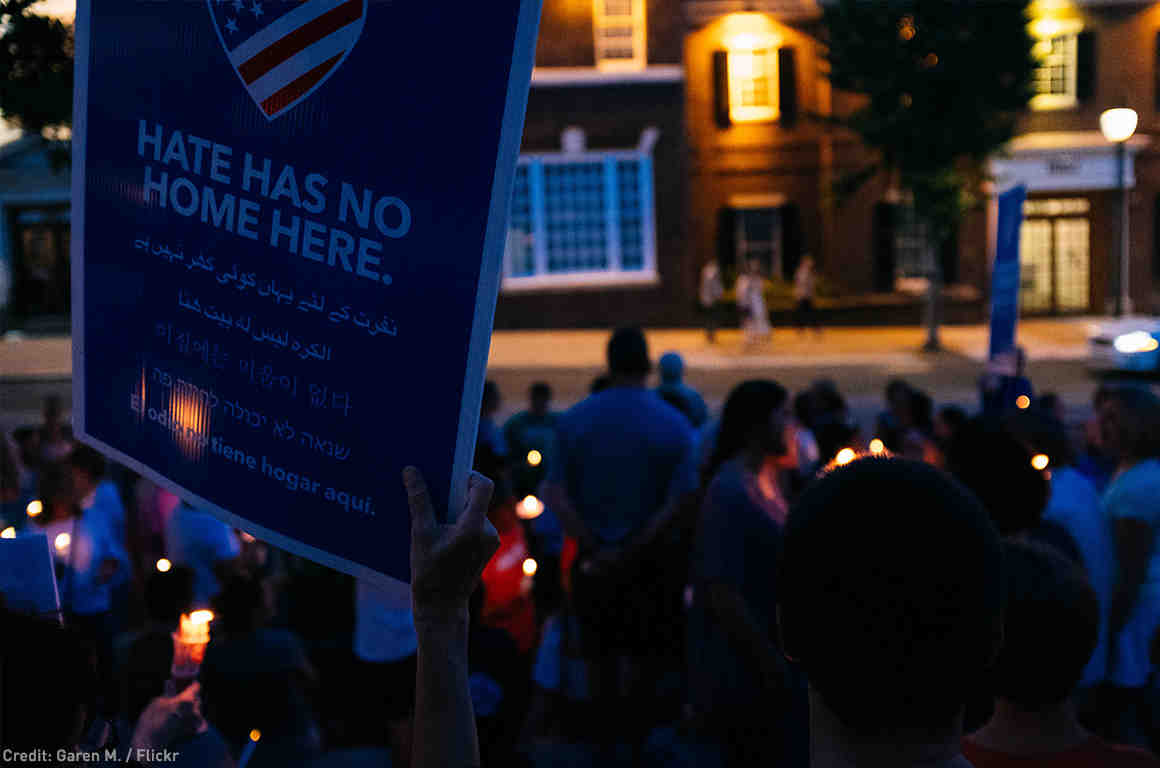 For all people of good will — regardless of party affiliation, race, creed or color — the events that took place this weekend in Charlottesville were sickening and deeply disturbing.

Several clear themes emerged for me this weekend. And while they are pretty obvious, I thought I would share them with the broader ACLU community, in an effort to give voice to what many of us are feeling and to spark a further discussion that will allow us to move together with greater hope and resolve through what are likely to be troubling days ahead.

While the events of this weekend — with white supremacists holding lit torches — frightened and outraged many Americans, we can never underestimate the impact of these images on African-Americans. That rally reflected this nation’s history of slavery, racial violence and terrorism, which has left an indelible mark on our democracy to this day. As employees, members, or supporters of an organization dedicated to racial justice, we are all affected. Many of us are even more directly affected because we and our family members are the direct targets of the white supremacists.  I know that speech alone has consequences, hurtful and deep, and that’s why I believe it’s important to place the ACLU’s representation of white supremacist demonstrators in Virginia in the broader context of the values and principles that have guided this organization for nearly a century.

First, the ACLU unequivocally rejects the ideology of white supremacists and we work actively with all our might to oppose that ideology in diverse communities across the country and to defend the right of all Americans to speak out against those views. By budget allocation, the national ACLU’s top issue areas are ending mass incarceration, protecting LGBT rights, and safeguarding immigrants’ rights, demonstrating our commitment to advancing equality and justice with communities that are often the targets of white supremacists’ bigotry and hate.

The ACLU has represented or publicly supported Black Lives Matter activists in First Amendment matters at least five times in recent months. Our work against police agencies’ surveillance of activists has been frequently in support of the Black Lives Matter movement and American-Muslim organizations and individuals.  We’ve represented and taken public positions in support of anti-Trump protesters more than five times since the election and represented one of the Standing Rock protesters in a free speech case. The ACLU has also defended the free speech rights of African-American environmental activists in Alabama against a defamation lawsuit brought by the toxic waste-generating corporation they opposed. This is all in the past year alone.

We are not newcomers to this work. We’ve defended individuals targeted for their socialist, anarchist, and communist affiliations, for anti-war speech, and for civil rights activism throughout our

history.  We have repeatedly defended the free speech rights of day laborers against city ordinances — grounded in anti-Latino racism — that would have prohibited their expressing their availability for work. The ACLU was founded in 1920 when the attorney general of the United States carried out his “Palmer raids” to round up immigrants based on their “subversive” views. And we stood shoulder-to-shoulder with the emerging labor movement of the early 20th century. The First Amendment —freedom of speech, freedom of association, freedom of the press, and freedom of religion — has always been foundational for our organization.

Second, and more directly related to the events of this weekend, there are important reasons for our long history of defending freedom of speech — including speech we abhor. We fundamentally believe that our democracy will be better and stronger for engaging and hearing divergent views. Racism and bigotry will not be eradicated if we merely force them underground. Equality and justice will only be achieved if society looks such bigotry squarely in the eyes and renounces it. Not all speech is morally equivalent, but the airing of hateful speech allows people of good will to confront the implications of such speech and reject bigotry, discrimination and hate. This contestation of values can only happen if the exchange of ideas is out in the open.

There is another practical reason that we have defended the free speech rights of Nazis and the Ku Klux Klan. Today, as much as ever, the forces of white supremacy and the forces for equality and justice are locked in fierce battles, not only in Washington but in state houses and city councils around the country. Some government decision-makers are deeply opposed to the speech we support. We simply never want government to be in a position to favor or disfavor particular viewpoints. And the fact is, government officials — from the local to the national — are more apt to suppress the speech of individuals or groups who disagree with government positions. Many of the landmark First Amendment cases, such as NAACP v. Claiborne Hardware and New York Times v. Sullivan, have been fought by African-American civil rights activists. Preventing the government from controlling speech is absolutely necessary to the promotion of equality.

Third, the First Amendment cannot be used as sword or shield to justify or rationalize violence. Violence — even when accompanied by speech — does not garner the protection of the First Amendment. It is also true that the airing of ideas — no matter how repugnant or loathsome — does not necessarily lead to violence. The violence of this weekend was not caused by our defense of the First Amendment. The ACLU of Virginia went to court to insist that the First Amendment be applied neutrally and equally to all protesters.  Reasonable members of our community might differ on whether we ought to have brought that case. But I believe that having divergent views within an organization dedicated to freedom of speech is a sign of strength not weakness. I also believe the ACLU of Virginia made the right call here. Some have argued that we should not be putting resources toward anything that could benefit the voices of white supremacy. But we cannot stand by silently as the government repudiates the principles we have fought for — and won — in the courts when it violates clearly established First Amendment rights.

Invoking the threat of violence cannot serve as the government’s carte blanche to shut down protests. If that were the case, governments would almost always be able to shut down protests, even when the protesters themselves are peaceful, because others could exercise a heckler’s veto through violence or the threat of violence. We must not give government officials a free pass to cite public safety as a reason to stifle protest. They have a responsibility to ensure the safety and security of all protesters and may make their case in court for reasonable time, place, or manner restrictions. That is what we sought in our lawsuit in Virginia.

The hard job for us now is to find concrete strategies for healing the divides that were laid bare this weekend. For the broader society, this would require that white supremacy, bigotry, and racism be confronted and rejected. Freedom of speech has to be valued and heralded as the cornerstone of our democratic society. Political leaders must shape the political discourse to underscore what binds us together as people, rather than exploit our differences. And government officials must neutrally apply the First Amendment and ensure the safety of all Americans when they take to the streets to exercise their constitutionally protected rights.

For our organization, we must remain focused and vigorous in our defense of civil liberties and civil rights in every community and in every context. Our 97-year history of defending the constitutional rights of all persons — even those we disagree with — is imbued with a belief that these rights are indeed indivisible, unalienable, and granted to each of us in our democracy. Our job is to turn those promises and aspirations into a reality for all people. And that work has never been more important than now.

Anthony Romero is the Executive Director of the ACLU