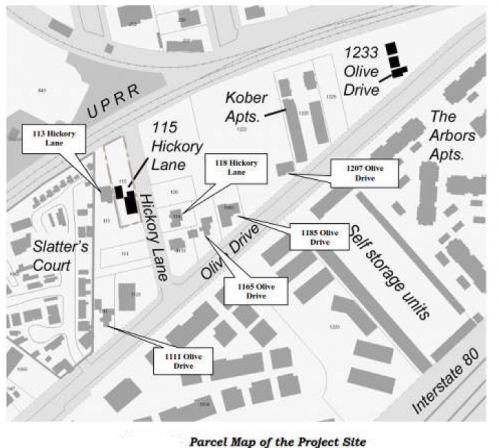 (Editor’s note: this was originally a post but since it was of length to be an article, it is being published on its own, we will endeavor to answer this piece by piece during the week, in the meantime, feel free to comment or ask further questions).

1)     The massive size of the Lincoln40 project which would be located on the far east end of Olive Drive would bring enormous traffic and circulation impacts on Olive Drive and Richards Blvd.

There would be over 700 Lincoln40 residents needing to get across Richards to UCD which would necessitate interrupting the traffic signal at Richards and Olive Drive constantly for the students to get to the UCD campus all day long, not just peak hours. This in turn will further the backed-up traffic along Richards corridor to more like 30 minutes or more, rather than 10-minutes or more currently. That longer back-up of traffic means that far more car fuel will be burned and far more fumes will deteriorate the air quality.

end of Olive Drive which will at some point become a cul-de-sac since Cal Trans plans to close off the Olive Drive exit and would make it a firetrap. How are fire engines to get to an emergency there, particularly with all the backed-up traffic? What if there were a train derailment for instance there?

3)     Due to the Lincoln40 project the subject a pedestrian/bike railroad underpass (or more expensive overpass) is being floated as an idea, but who is going to pay for the $7 million price tag for that? Lincoln40 would be creating the tipping point to need such infrastructure which would cost $7 million. The Lincoln40 developer has made clear that he is not going to pay the bill for that bicycle and pedestrian infrastructure, even though it is his Lincoln40 project exacerbating the traffic and circulation situation to need it. Plus, Lincoln40 will be expensive, luxury apartments designed exclusively for student housing only primarily with 4- and 5- bedroom “suites” with single-room-occupancy renting by the bed, rather than being a traditional 1,2, 3 bedroom apartment complex which would be for non-students as well like families and local workers needing rental housing. So, are you saying that Davis residents need to subsidize Lincoln40 by helping to pay for infrastructure for UCD student housing needs?

4)     What about the toxic plume headed toward Lincoln40? Is it going to be investigated? Apparently, the developer wants to ignore this issue. What about the health and safety issues to the residents from the volatile toxics that need to be analyzed as to their impacts sooner or later? The City would be liable for any health issues later that emerged if this project is allowed to move forward without a complete analysis is this plume. The developers responsible for this and the City needs to not subsidize this Lincoln40 problem either. Why is there no Vanguard discussion about this? Instead there is the “merry-go-round” of the same Vanguard article repeated over and over again saying the same thing, which is putting the focus on the City, rather than giving at least equal time to the UCD’s responsibility on of all of this.

So, it is really not helpful for articles like this continue to side-step so many of the real issues and try to reduce the problem to a ration calculation issue. When is the Vanguard going to address these relevant issues and impacts on the City rather than trying to continue to simplify it to a math ratio? And on that subject, this is not really about Sterling and Lincoln40 being the endpoint solution.  UCD is trying to continue deflecting its massive housing needs onto the City while continuing its long history of irresponsibility to its students and its opportunism towards to City. So why isn’t the Vanguard giving equal time to that subject? There are at least two more projects in the pipeline targeting student housing in the City. One makes absolutely no sense, proposed near Playfields park in South Davis which would create even more problems trying to get students across I-80 to the UCD campus daily. This would only further exacerbate the Richards corridor traffic problem.

The other project is a private company proposing a student project on Oxford Circle which does makes sense since it is near Russell Blvd. and right across from UCD. This project will be at least 5-stories. Meanwhile UCD is going to the expense of demolishing its 3-story Webster Hall right near it on Oxford Circle to build only a 4-story replacement! What an enormous waste by UCD of land and financial resources. I wonder how much of that funding is public funding from our taxes?  So why isn’t the Vanguard talking about this Webster Hall lost opportunity occurring?

Instead of placing the focus on where the primary problem is, of UCD’s negligence and continuing the discussion of how UCD needs to step-up, the Vanguard continues to try to impose the problem UCD has created on the City.  Why does the Vanguard continue to sidestep and ignore covering the massive impacts and problems brought on by mega-dorms and UCD’s constantly deflected housing needs? Why isn’t the Vanguard giving at least equal time now on how UCD needs to help solve this problem that they have created instead of articles which are not balanced and do not help, like this one?