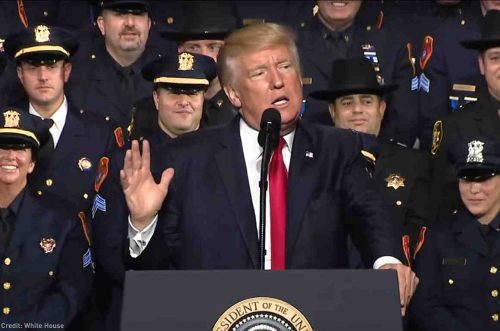 From Press Release – President Donald Trump’s wrongheaded remarks last Friday that endorsed police brutality will do nothing but encourage and empower such bad behavior by law enforcement in Sacramento and the rest of the country, charged the Sacramento chapter of the National Lawyers Guild today.

Trump, speaking to police in Long Island, said officers should not be “so nice” when protecting the heads of suspects who are put in police vehicles. “You can take the hand away, OK?” Trump suggested to officers who protect people by putting their hands on top of the suspects’ heads.

Trump also mistakenly declared that laws “totally protect the criminal, not the officers,” when it’s been proven that officers using excessive force in causing suspects’ deaths are virtually immune from prosecution, as has been highlighted over recent years involving the shooting deaths of people of color across the United States.

“Our legal observer teams have reported and documented use of excessive force, intimidation and overreaction by the Sacramento Police Department., Sacramento County Sheriff’s Department and the

“Trump’s comments will do nothing but empower bad cops to do bad things and drive a deeper wedge between law enforcement here and the residents they are supposed to serve and protect. The comments also are a disservice to officers who do their job respectfully and sincerely every day in our community.

“The National Lawyers Guild in Sacramento implores law enforcement agencies and individual officers to condemn in the strongest terms, as some in law enforcement have done in New York, the statements last Friday by Trump that blatantly and wrongly endorse police brutality,” Vellucci said.

“…and when you see these thugs being thrown into the back of a paddy wagon — you just see them thrown in, rough — I said, please don’t be too nice. (Laughter.) Like when you guys put somebody in the car and you’re protecting their head, you know, the way you put their hand over? Like, don’t hit their head and they’ve just killed somebody — don’t hit their head. I said, you can take the hand away, okay? (Laughter and applause.)”

Freddie Gray ended up dead after the kind of treatment described above. And despite his death, last Friday Donald Trump made sure that police officers around America knew that if they use illegal, unnecessary force when arresting suspects, he will have their backs. He then doubled down by promising to repeal anti-police laws that don’t exist. This is the man who said he could kill someone on Fifth Avenue in New York, and it would not make any difference to his supporters. Apparently, he believes he can make up laws and then pretend to repeal them, and no one will notice.

I don’t think so. Not when his remedy for a crime is a return to unconstitutional, ineffective policies like “stop and frisk” practices. Not when his attorney general proposes a return to policies that will produce the same racially biased results, with overly long sentences, that do nothing to make us safer. Trump’s delusional view of the world tells people whose communities have already suffered and paid a heavy price for unnecessary police violence that more of the same is coming. Why wait for the courts to mete out punishment when we can get a little payback on the street?

In Trump’s world when someone is arrested, officers should not hesitate to inflict some pain — and if that attitude makes encounters between police and the public more violent and dangerous, so be it. If more people — innocent or guilty — are injured or killed, so be it. If culture starts at the top, Trump’s promise to back officers who use unnecessary force is extremely dangerous. This is precisely the kind of rhetoric and viewpoint that led to the behavior of Chicago police officers who were indicted in June for conspiracy for “backing up” Officer Jason Van Dyke by lying about the killing of Laquan McDonald.

In showing support for the police, Trump quickly turned to fantasy and fiction. He went from telling police not to worry about the use of illegal force to making up laws that don’t exist and promising to get rid of them.

No such laws exist, and none were passed during the Obama administration. Police kill unarmed Americans with virtual immunity because the laws dealing with the police’s use of deadly force are some of the strongest, pro-law enforcement laws in the country. In 2015, for example, the Guardian reported that police in America killed 1,146 people. Fewer than 20 officers were prosecuted. Ask the families of Terence Crutcher and Philando Castile if the laws are stacked against police officers. And while both families were paid millions of dollars — seeming to suggest that the officers who killed Crutcher and Castile were “wrong” — the officers were protected.

The trip into fantasy land did not stop there. At the Friday event, Trump described a conversation with a Chicago police officer about how long it would take to “straighten out the problem” in Chicago. He said it ended like this.

This is typical Trump. He presents simplistic solutions to complicated problems with no thought or judgment. We can solve all crime problems by getting tough and arresting all the bad guys in a couple of days, slamming their heads into police cars as they are taken into custody. This sounds like the plot to a bad Western movie. It is certainly not sane criminal justice policy. Culture and acceptable behavior start at the top, and this kind of message from this administration is not new. Trump’s comments are completely consistent with the Justice Department’s approach to criminal justice — a return to failed policies of the past and support police behaving in excessive and unconstitutional ways.

Some may say that Trump was only talking about using violence against gang members — he referred to them as animals. Here are two problems with this analysis. First, the rule of law forbids the use of unnecessary violence, even against people who are guilty of a crime. Second, the police are not now and never have been and never will be perfect. So innocent “suspects” will get the same treatment. And we know which communities will pay the price for unnecessary police violence.

We have been down this road before, and opposition to Trump’s view is not about defending horrible behavior. If gang members are animals, what about gang affiliates? Or people suspected of being gang members or affiliates? Or innocent Black and Latino males who live in the same neighborhood as gang members. Once the unnecessary violence starts, it is impossible to restrict it to any one group of suspects.

And once unnecessary violence is acceptable, does it stop at banging someone’s head against a police car? How about doing it twice? Or a couple of blows from a nightstick? Or a couple thousand volts from a taser? Eric Garner got choked to death over selling loose cigarettes. The culture Trump promotes will lead to more Eric Garners, Philando Castiles, Sandra Blands.

Some police departments have repudiated Trump’s remarks — and every law enforcement agency in the country should. Still, what’s really scary is that some number of the officers present at the Friday event were laughing and applauding.