How bad is the housing crisis locally?  On Thursday in the middle of August, students were coming out to discuss housing at the Planning Commission, even though the housing at Trackside is not designed for students and in fact will in most cases preclude student occupancy of the units.  Nevertheless, the housing shortage and the 0.2 percent vacancy rate locally is profound and is starting to drive changes in the Davis market – some of which will be perceived to be negative ones.

While Davis’ local problem can be seen in locally-based issues – student enrollment increases at UC Davis combined with Measure R growth restrictions – the impact of UC Davis’ housing crisis is putting additional pressure on other communities and the region.

And it is happening at a time when the state is experiencing its own housing crisis.  This month, for instance, state legislators are debating their own housing package which could have profound impacts locally and statewide.

CALmatters put out a piece last week that illustrated the breadth of the problem.

Cost of housing is a problem.  While California has always been more expensive than the rest of the county, the gap has grown.  According to the article, “The median California home is now priced 2.5 times higher than the median national

home. As of 2015, the typical California home costs $437,000, easily beating the likes of Massachusetts or New York.”

These costs have caused “California’s homeownership rate to dip significantly” despite low mortgage rates.  “Just over half of California households own their homes — the third lowest rate in the country, and the lowest rate within the state since World War II.”

The housing crisis, they found, has a major impact on the statewide economy.

“The McKinsey Global Institute found that housing shortages cost the economy between $143 billion and $233 billion annually, not taking into account second-order costs to health, education and the environment. Much of that is due to households spending too much of their incomes on the rent or mortgage and not enough on consumer goods,” they write. 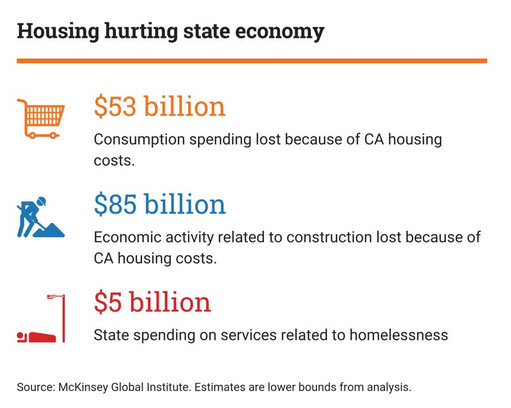 They add, “Even the attractive salaries and lavish perks of Silicon Valley struggle to overcome the local housing market, as young tech talent flees to the relatively inexpensive climes of Austin or Portland. Nearly 60 percent of Los Angeles companies in a recent University of Southern California survey said the region’s high cost of living was affecting employee retention.”

The article warns that the housing crisis will not get better any time soon – in particular for low-income residents.

“The state estimates that it needs to build 180,000 homes annually just to keep up with projected population growth and keep prices from escalating further out of control. Unfortunately, for the past 10 years, the state has averaged less than half of that. In no year during that span did California crack the 100,000 barrier,” they write. 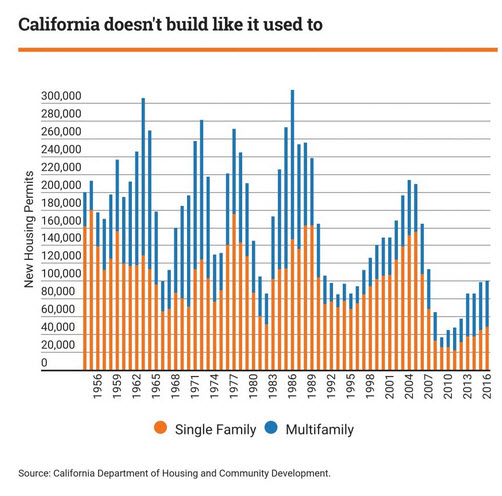 “There’s fierce debate over how long it takes low-income residents to benefit from the construction of new market-rate housing—a renter on the wait list for housing vouchers won’t take much comfort in the luxury condos being built in downtown Oakland or Los Angeles. While California faces an affordable housing gap at nearly all but the highest income levels, the low-income housing shortage is most severe.

“According to the nonpartisan Legislative Analyst’s Office, helping just the 1.7 million poorest Californians afford homes would cost $15 to $30 billion a year. The Los Angeles Times estimated that the three marquee bills considered by lawmakers this month would provide less than 25 percent of that total.”

How did things get this bad?  Basically, housing could not keep up with the rise in population. 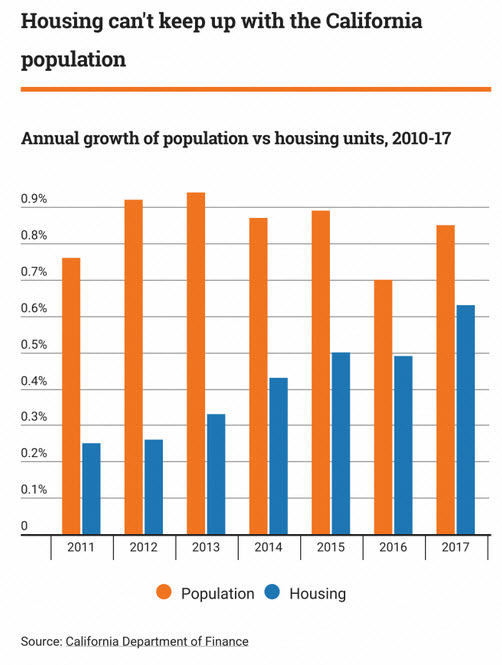 “From 2010 to 2017, the population of the state has grown 6 percent. That’s more than 2 million newly minted Californians, all with the nasty habit of wanting a place to live. Making matters worse, most are cramming themselves into our state’s large cities. In fact, 75 percent of the state’s new residents have sprouted up in urban centers with populations over 50,000 (don’t be too hard on them–that’s where most of the job growth has been).”

In addition, building new homes is expensive, particularly in California.

They find, “Part of the problem boils down to the (literal) nuts and bolts of housing development. Over the last five years, construction costs have been ticking up across the entire country. 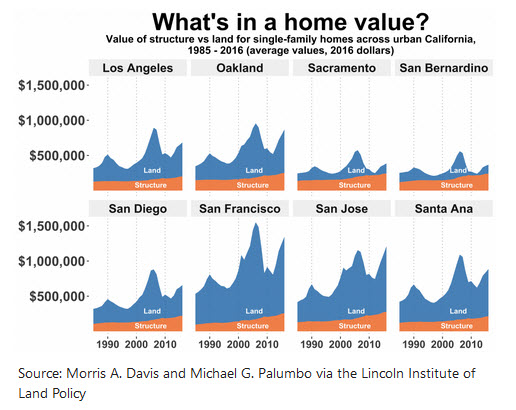 “A labor shortage in the home building industry bears much of the blame for this. When the housing market crashed in the late 2000s, construction workers left the industry in droves. Now that prices are back at nosebleed levels, those same workers haven’t come back. Across the country, employment in the construction industry is down more than 13 percent since the height of the recession. In California, it plummeted twice that far.

“Where have all the workers gone?” they ask.  “Theories abound: tighter immigration laws, a dearth of skilled labor, the opioid epidemic, depressed wages, coddled millennials not knowing the value of a hard day’s work. Whatever the cause, it all makes it that much harder for developers to build homes on the cheap and easy.”

But they find that construction is only part of the problem and “sometimes a relatively small part at that.

“In most of the state’s major urban areas, the bulk of a single-family house’s price is locked into the land it sits on. That high price tag on the cost of actually buying a parcel and prepping it for construction not only makes new housing more expensive, it influences what kind of housing gets produced: developers prioritize high-end projects, since even the cheapest pre-fab unit will come stuck with a steep fixed cost,” they write.

“What makes land expensive? When it’s in shortest supply,” they continue. “Take San Francisco: Seven-by-seven miles of hillside penned in by water on three sides. Of the top 15 most physically constrained metro areas in the country, seven dot California’s oh-so-desirable coast. But many of those same coveted locales place additional limits on where—and when and how and how much—construction can take place. That all makes it that much harder for housing to keep up with population growth. And over the last decade, it has not.”

They ask: If not in your backyard, then whose?

“Who has cause to celebrate when a new housing project goes up in your neighborhood?” they ask. “Young homebuyers, nearby businesses, new arrivals to the area, and, of course, developers. But people who have been living in the neighborhood for years may worry that the new development will depress the value of the homes they own, or trigger increases in the rent they pay. Those who prefer not to live next door to a construction site, or watch their zucchini garden wither in the shadow of a garish new condo building, have plenty of reasons to object.”

They continue, “And object they do. With the exception of one irregularly enforced state law, land use planning in California is a local process—and one that affords opponents of change ample opportunity to stall, stymie, or scale down. The tool kit of local obstruction includes zoning restrictions, lengthy project design reviews, the California Environmental Quality Act, parking and other amenity requirements, and multi-hurdled approval processes. In California, you’re most likely to find these extra restrictions where developable space is already scarcest—in coastal urban enclaves.

“Local pushback might be rooted in concerns about the environment, about congestion, about the creep of gentrification, or in a desire to preserve the ‘character’ of the neighborhood (however that might be defined). But whatever the flavor of NIMBYism and whatever its ultimate goals, higher hurdles to development in the state’s most desirable locations mean many cities have failed to add new units fast enough to keep up with population or job growth.”

This is the problem we face in Davis.  Local land use laws such as Measure R have restricted the ability of the city to grow outward.  But at the same time, there is a battle for infill between neighbors who either want less density and height or nothing altogether, and developers looking to maximize profit and council leaders looking to maximize the provision of housing – this has led to heated and extended battles over relatively small projects while the city continues to lag in its ability to supply needed housing for students and also for working people and families.

The bad news is that, while many have blamed the enrollment growth for growth pressures in Davis, statewide trends suggest there would be pressures regardless.

48 thoughts on “Monday Morning Thoughts: Understanding the Depths of the Housing Crisis”