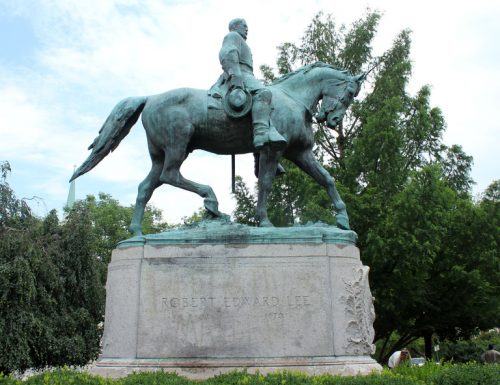 The resurgence of white supremacy and the violence perpetrated by neo-Nazi terrorists in Charlottesville are painful reminders of how much work remains to challenge and defeat systems of hate and racial oppression in our nation.

As a Black woman living in a former slave state adorned with monuments to the Confederate cause, I believe that work requires us to confront our own history and ask: What message do we send when we chose to honor one part of history but not others?

The Confederacy sought to protect slavery, dissolve the Union, and preserve white supremacy. While Confederate armies ultimately failed to achieve those first two goals, the monuments erected in their memory years later under Jim Crow were and remain vile symbols of white supremacy and the terrorization of communities of color.

In my state of North Carolina, there are 90 different monuments to the Confederacy on public land — the second most of any state in the nation, according to the Southern Poverty Law Center. They stand outside our state capitol and our public universities. They greet visitors to courthouses across the state. They are central fixtures of public parks.

This is land that is meant for all members of the public. Yet there are no monuments to many of our other ancestors — to those who were enslaved, to abolitionists, to pro-Union North Carolinians, to the Black soldiers who fought and died to defeat the Confederacy. And, as Professor Timothy Tyson notes, there are no monuments commemorating “the interracial Reconstruction government of the 1860s, which gave us the North Carolina Constitution we still try to live under.”

What we choose to represent and honor in these spaces matters. Shrines to white supremacy and racial violence denigrate my existence and that of millions of North Carolinians. When we enter a courthouse or visit our state capitol and are greeted by monuments to slavery and white supremacy, it sends a clear message that our government endorses the oppression and inequality that they represent. And by doing so, there is only one thing we can take away from it: We are less valued as citizens.

That’s why earlier this week, the ACLU of North Carolina called for

these monuments to come down once and for all.

Our governor, Roy Cooper, echoed our call and joined those demanding for the monuments to be removed. But while cities like New Orleans and Baltimore have done just that, North Carolina’s monuments remain protected under a 2015 law barring their removal. That law too must go.

The events of the last week have made it clearer than ever that we must confront our full history, acknowledge the shameful message these statues send, and take action to remove them.

But the work to undo white supremacy cannot end there. From voter suppression and inequitable educational resources, to mass incarceration, the tools of Jim Crow are still being deployed to attack the rights of Black and brown people across the nation. We must live up to the principles of liberty and justice for all by removing monuments and shrines to white supremacy and rooting out racial injustice throughout the land.

Share:
Tags:ACLUConfederate StatuesWhite Supremacy
Previous : Unity Rally Brings Out Hundreds in Davis to Speak Out against Hate and President’s Comments
Next : We Need to Fight for Justice in Charlottesville and in Davis