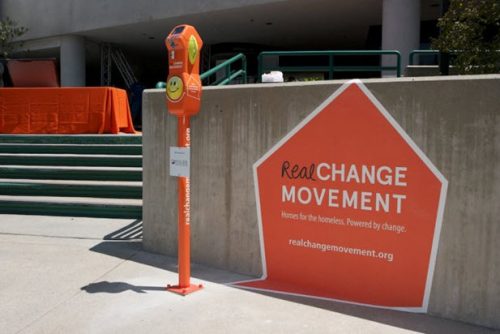 Last Wednesday, Bill Pride from Davis Community Meals came to speak at the Vanguard Conclave and talked about the program Pathways to Employment, which began a year ago.  The idea was to bring together a group of people including the Chamber of Commerce, Davis Community Meals, the Faith-Based Community, Pastor Bill Habicht, the city, and the county to “set up a program to help homeless and low income folks find some employment opportunities in the city of Davis.”

“What we came up with is a small program where we’re employing five people at a time for between three and four months, they work part-time,” Bill Pride explained, “beautifying the downtown area.”

At the same time they hope that they are building job skills, self-sufficiency and self-esteem.

“What we’re trying to do is establish in them, in their own self, the idea that they can go back to work and they can be productive, that we can show the community that they can come back and be employed and be good members of our community,” he added.

They have only been running this program since April, but they have already had one person who has gone through the program get employment in the city of Davis.  Bill Pride said he is hoping that in the next three or four months they can have another three or four success stories they can share with the community.

Bill Habicht explained on Wednesday, “What makes this program unique is that they really focus on the dignity of the individual.  This is not free labor.  Folks are being paid $12 an hour to be in this training program.  So it’s about restoring someone’s sense of self-worth which can make a huge difference for someone whose experience for a large portion of their life is ‘you’re (of) no value.’”

As Michael Bisch explained in a guest piece over the week, “The goal of Pathways to Employment is to engage property-owners and businesses in a collaboration to make our downtown brighter

and better while offering opportunities to our neediest community members.”

But in order to fund the program, the organizers are setting up what they are calling “giving meters,” which they hope will generate the funding needed to run the program.

Since the Vanguard announced the Conclave that was held last Wednesday, many in the community have come forward with stories about their concerns about the homeless in the downtown – aggressive panhandling, hostile behavior, the mess of human waste and hoarding activities.

Funding programs like Pathways to Employment are one way people can give without giving direct handouts to the homeless.

During the May walkabout discussion in the downtown, Chamber CEO Christina Blackman talked about the need to get the community to help homeless people in ways that do not involve giving direct handouts.  “Educating the community as to why this is a different way of helping,” she said.  “I think if we really want to help solve the problem then making sure that we provide the support services and eventually housing, if we can.”

She noted that, with the low cost of methamphetamine right now, it doesn’t take a lot of money to supply a week’s worth of drugs to an addict.  She noted that an addict “can turn around and get cash pretty readily and then dose up again – it’s just keeping her in that space.”

Many have discussed the need for law enforcement pro-activeness, but Police Chief Darren Pytel, who was not a participant last week, has consistently stated that we cannot arrest our way out of this problem.

Chief Pytel explained that “we have to deal with people’s immediate safety concerns.”  But, even having said that, “there may or may not be anything that we can do.

“A lot of people say, why don’t you just arrest them,” he said.  “We’re finding over and over that that’s not necessarily the answer,” especially if “mental illness or drugs and addiction are the primary issues.

Finally, Robb Davis acknowledged there is not just one thing we can do.

At the same time, in a column in late May he said, “In Davis, we are not merely throwing up our arms and saying there is nothing we can do.  We’re committed as a city to move forward with a process known as Housing First.  Housing First is about helping people who are in those situations to move into housing before dealing with the broader issues they face.”

He said, “Housing First starts by providing an alternative to the street but then moves aggressively to deal with the causes of the homelessness.  The key is to get a roof over people’s heads and then to provide wrap-around services to address the other challenges they face.”

But again he warned, “Let’s be clear, it is not a panacea.”

This is all a first step, but it seems to be a solid way forward.