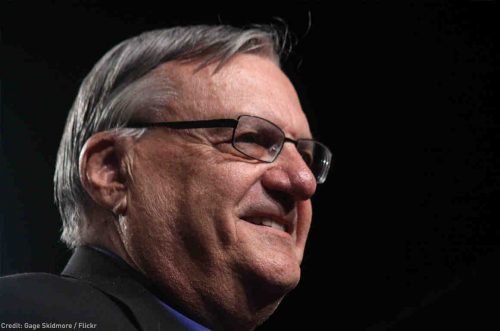 Almost 10 years ago, Manuel de Jesus Ortega Melendres filed a lawsuit in Arizona after being illegally detained by the Maricopa County Sheriff’s Office. Mr. Ortega Melendres was one of many people who dreamed of holding then-Sheriff Joseph M. Arpaio accountable for his reign of terror over Maricopa County, which includes Phoenix and surrounding areas.

A decade later, his dream is a reality.

Arpaio, who held the sheriff’s office for 24 years, stands convicted of criminal contempt of court. The man who declared himself “America’s toughest sheriff” — who racially profiled Latinos and detained people unconstitutionally and in defiance of a federal court order, who tried to hold himself above the Constitution and the rule of law — has ended his career in disgrace, voted out of office and now a convicted criminal.

The story of how Joe Arpaio ended up a convict is the story of how a community rose up to assert people’s rights. It’s also a tale of how a painstaking, sometimes maddeningly slow, legal process ultimately stopped abusive and unconstitutional practices. This story stands as a warning for those government officials in Washington and in state capitals who are now calling for local police agencies to act as immigration enforcers: Don’t be like Joe.

These officials, including President Trump and Gov. Abbott of Texas, should listen carefully to the story of Joe Arpaio. That story begins in the mid-2000s, when he decided to turn the Maricopa

County Sheriff’s Office into a full-fledged immigration agency. He jumped to act on anti-Latino constituent “tips” urging him to do something about the Spanish-speaking employees at this restaurant or the Latino day laborers in the parking lot at the hardware store. Rather than explain to these complainants that there was no crime here, Arpaio implemented policies to find and detain undocumented immigrants based on race discrimination and illegal detentions.

Following Arpaio’s direction, deputies of the Maricopa County Sheriff’s Office began to target Latino drivers and passengers in cars and trucks, pulling them over on the pretext of a traffic violation and then questioning them about their immigration status. At first, deputies lurked outside of places like a church in the town of Cave Creek, which ran a day laborer center where workers connected with people who wanted to hire them. Soon Arpaio spread his policies more broadly, running his infamous immigration sweeps by sending up to 100 deputies into a neighborhood — usually a predominantly Latino one — and conducting traffic stops for an entire day or weekend.

Arpaio himself would show up during these sweeps, posing for the press and parading frightened men and women who had been arrested in the traffic stops before the cameras by putting them handcuffed into open-air corrals. During these sweeps, the vast majority of people arrested and detained were never charged with any crime. Instead, they were turned over to Immigrations and Customs Enforcement to decide whether to start deportation proceedings.

Arpaio’s immigration policies violated the Constitution in two ways. Deputies were targeting people for traffic stops because of their ethnicity, which violates the Equal Protection Clause of the 14th Amendment. And deputies detained people when there was no reason to believe that they had committed any crime, which violates the Fourth Amendment. People were so frightened of the Maricopa County Sheriff’s Office — the law enforcement officers sworn to protect them — that some avoided leaving the house altogether.

But then something extraordinary happened: Community leaders began to fight back. With tremendous courage, they painstakingly documented the Maricopa County Sheriff’s Office’s civil rights violations, devoting entire weekends to filming traffic stops and days and nights to running volunteer hotlines to field countless desperate calls from people reporting that a family member had been taken by the sheriff’s deputies.

And in 2007, Mr. Ortega Melendres filed a lawsuit seeking to hold Sheriff Arpaio to account after he was arrested during a traffic stop and detained for eight hours, even though he had a valid U.S. visa. In that case, the American Civil Liberties Union, the ACLU of Arizona, the Mexican American Legal Defense and Educational Fund, and the law firm Covington & Burling LLP ultimately won five groundbreaking court rulings in the federal district court and two in the federal appeals court. The first major victory came in December 2011, when the district court issued a preliminary injunction — a legal ruling that Arpaio’s policy of detaining people based solely on suspicion that they were undocumented immigrants violated the Fourth Amendment — and ordered an immediate halt to that practice.

It was this 2011 ruling that ultimately led to Arpaio’s criminal downfall. Even as the Ortega Melendres case continued, Arpaio’s deputies continued to detain people just because of their immigration status in violation of the Constitution and the 2011 court order. In 2016, the federal court ruled that Arpaio was in civil contempt of court for repeatedly violating the 2011 order. This led the U.S. Justice Department’s public integrity unit to bring a separate criminal contempt charge against Arpaio, based on his deliberate decision not to obey the court’s December 2011 order. On July 31, 2017, Arpaio was convicted. His sentencing is set for October 5.

During the civil and criminal contempt trials, Joe Arpaio showed his two faces. On the witness stand, he appeared meek and claimed that he was unaware of what was happening in his own agency. His constant refrain was that he wasn’t responsible for the violations of the court’s order because he delegated the running of the agency to his deputies.

But the other face of Joe Arpaio came through in video recordings of his public statements to the press and his many donors and supporters. This Arpaio boasted that no one would tell him what to do. This Arpaio expressed defiance of the federal district court. This Arpaio ordered a sergeant to detain a group of immigrants without any criminal charge, even after the sergeant protested that it would violate the court order because Arpaio wanted to get to the jail and personally give a TV interview to show off his arrests.

This story did not end well for Arpaio, and each chapter inflicted terrible harms on the people of Maricopa County and civil rights and civil liberties. These are the same harms that will flow from President Trump’s executive order, which seeks to penalize “sanctuary cities,” and Texas’s Senate Bill 4, a draconian and unconstitutional state law that punishes police chiefs and sheriffs who decline to detain people based only on their immigration status. Politicians who are pushing for these backward policies should heed the lesson that Joe Arpaio learned the hard way.

Cecilia Wang is the Deputy Legal Director of the ACLU