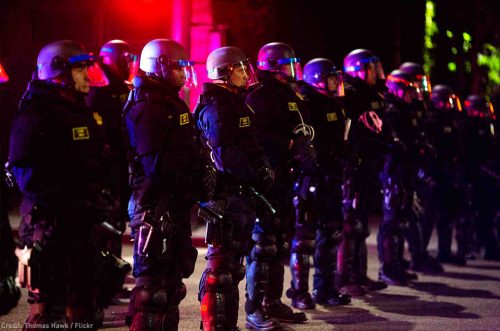 Today (August 9) marks the third anniversary of the fatal police shooting of Michael Brown in Ferguson, Missouri. It was this shooting that woke this country up to the epidemic of police violence.

We as a nation have watched dozens of fatal police shootings, often of unarmed boys and men of color since August 9, 2014.

We’ve seen almost no police accountability for these fatalities over the last few years. In 2014 and 2015,  zero officers were convicted of murder or manslaughter, while in 2016 there have been just a few convictions. And we’ve witnessed the outrage and protest around these unjustified shootings being met with militarized policing.

The militarized response to the uprising in Ferguson shocked America. It shocked the world. Rep. Emanuel Cleaver (D-Mo.) declared, “Ferguson resembles Fallujah.” The sniper rifles, armored vehicles, and tear gas turned on Ferguson protesters were stunning, and yet it could have happened in countless communities in this country.

In the ACLU’s report, “War Comes Home: The Excessive Militarization of American Policing” — published just a few weeks before the Ferguson uprising — we explained that militarized policing was routine for many communities, particularly those hit hardest by the war on drugs. We shed light on the Department of Defense 1033 program — a military weapon giveaway that brings weapons of war from the battlefield to your hometown.

Though there are several federal programs that provide local law enforcement with military weapons, 1033 is the most dangerous. President Obama was right to reform it and prohibit the transfer of certain weapons, like bayonets and tanks, and to restrict other weapons like Mine Resistant Ambush Protected vehicles, or MRAPs, from being sent to police departments. To learn that these modest reforms may have been in name only was deeply disturbing.

Last month, the Government Accountability Office, Congress’s investigative arm, released a truly shocking report on the 1033 program. Setting themselves up as a fake law enforcement agency, GAO investigators applied for military gear and received $1.2 million worth of rifles, pipe bomb equipment, and night vision goggles, among other 1033 equipment.

GAO officials who ran the sting operation couldn’t believe how easy it was to trick the Pentagon into transferring military gear to a federal law enforcement agency — and a fake one at that. “They never did any verification, like visit our ‘location,’ and most of it was by email,” a GAO official told The Marshall Project. “It was like getting stuff off of eBay.”

And if this isn’t troubling enough, there’s President Trump’s take on 1033, which he delivered in the same speech where he incited police violence generally.

In late July, as Donald Trump told law enforcement in Long Island, New York, “don’t be too nice” to “these thugs,” he assured them that the 1033 equipment was “being put to good use.” Trump said, “the stuff is disappearing so fast we have none left.” According to Trump, he changed the rules around 1033 on his “first day,” though there’s no evidence of this at all.

During the campaign, Trump made clear that he was a fan of 1033, calling it “an excellent program that enhances community safety.” He pledged to rescind Obama’s executive order around militarized policing. Again, it is not clear if and when he did this, certainly not to the public and not even to officials at the Department of Defense. At a House Armed Services subcommittee hearing last month, witnesses from the Department of Defense recommitted to operating 1033 consistent with the Obama reforms, even acknowledging that city councils or other local governing bodies are required to sign off on certain military weapons before they are received.

Given the GAO report and Trump’s comment, the best thing to do is suspend the 1033 program. The ACLU has asked for a suspension before, and now we’ve been joined by the Democratic leadership of the House Armed Services Committee. “The Defense Department,” said Rep. Adam Smith (D-Wash.) and Rep. Madeleine (D-Guam) in a joint statement, “should not be providing military equipment to civilian law enforcement agencies until we can be sure the program is capable of preventing dangerous items from falling into the wrong hands.”

As we are reminded on the third anniversary of Michael Brown’s death and the protests it provoked, it looks like 1033 is in the wrong hands with President Trump. Only change will prevent future death and tragedy and advance the reforms so desperately needed to fulfill law enforcement’s promise to serve and protect.

3 thoughts on “On Third Anniversary of Ferguson, President Supports Further Militarization of Police”