One of the big questions about housing is what is our internally-generated housing need.  While it is clear that university growth is playing a role in bringing both additional students, as well as faculty and staff into town, thus generating housing demand, there are other populations as well that are generating need.

One of the big questions that emerged was how many employees work in Davis but do not live here in town.  We were able to use the university Travel Survey to see that most students live in town (92.5 percent), but that number drops to 69 percent of faculty and less than 50 percent of staff.

To find out the overall number, we asked city staff who pointed us to the 2017 State of the City Report.

What we found is nothing short of stunning.  And it points to a massive work-live imbalance in Davis. 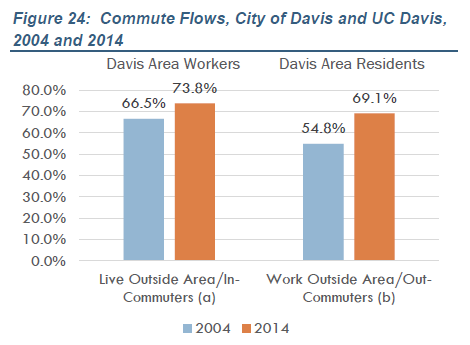 Using the most recent data from the Longitudinal Employer-Household Dynamics (LEHD) Origin-Destination Employment Statistics, published by the U.S. Census Bureau, “there were approximately 28,465 persons employed within the City of Davis and on the UC Davis main campus in 2014, which represents a 12.2 percent decrease from 2004.”

On the other hand and just as concerning, nearly 70 percent of those residents who are employees (69.1 percent) were “out-commuters” working “outside of the Davis area.”  That also represents a significant increase as the out-commuter rate was 54.8 percent in 2004.

In other words, the trends were bad and got worse in both respects. 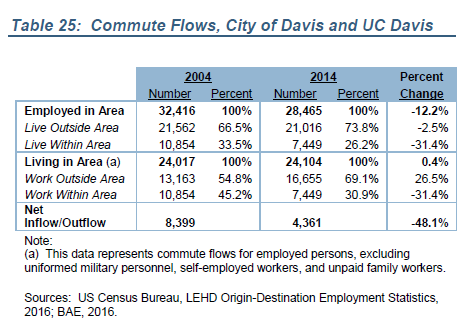 To put numbers on this, about 21,000 of the over 28,000 employed people in Davis and UC Davis live outside of the area and have to commute into town each morning.  And on the other hand, 16,655 of the 24,000 people who live in Davis and are employed work outside of town.

This reflects actually two problems.  The first problem is the lack of housing for people who work in Davis, commute to Davis, but either cannot find housing or cannot afford housing to live in Davis.  We obviously do not know what kind of percentage of those 21,000 who work in Davis but live outside of the Davis area wish to move here, but that number is rather astronomical.

The second problem is one we have discussed over the years – it is the jobs-housing imbalance.  One of the problems is that if someone doesn’t work at the university, the chance of their finding a high enough paying job to live in Davis is reduced and they go to Sacramento or even the Bay Area to get those kinds of jobs.

One reason for the push for innovation centers and economic development has been to produce those high-end jobs to enable people who live in Davis but work elsewhere to perhaps more often remain in town.

Instead, it seems that every morning in Davis about 20,000 people come into town from out of town while at the same time about 16 to 17,000 people who live in town, get on I-80 and commute east or west to their jobs.

That is not a healthy situation for our community in a lot of ways.  It makes Davis more of a bedroom town.  It disconnects a portion of the population from civic engagement.

It is also not good for the environment, as people have to get into their cars to commute to work – releasing GHG and adding to the community’s carbon footprint.

As we noted on Sunday, there are impacts for not having sufficient housing.  The closer people live to campus, the more likely they are to get there by means other than an automobile.  A very low

percentage of students who live within two miles of campus drive to school on a regular basis.

However, almost everyone who commutes to town does so by themselves, in a car.  That adds GHG emissions and it adds to traffic flows.

We knew that housing and lack thereof was impacting traffic and commute, but the out-commute is just as stark and just as impactful, and that is the result of lack of economic development.

The State of the City report notes, “The intensification of cross-commuting patterns, including an increasing rate of both in-commuting and out-commuting, reflects a growing disconnect between the employment opportunities available within the Davis area and the characteristics of Davis as a residential community for workforce households.”

The report notes that “some Davis area workers prefer to live in areas like Sacramento, Woodland, or Dixon, to take advantage of lower housing costs and/or availability of social and recreational opportunities for young professionals.”

Meanwhile, “Davis remains a highly desirable community for higher income and professional households, particularly those with children, due to the community’s reputation as a culturally and politically progressive community, with a high quality of life, and exceptional public K-12 educational opportunities.”

However, “with an existing net inflow of workers (i.e., jobs minus employed residents), an average residential vacancy rate of only 3.7 percent (and a multifamily rental vacancy rate of only 0.2 percent), and little new housing development, the community’s existing cross commuting patterns are likely to intensify, corresponding with upward pressure on area housing prices.”

Where does this leave the future?

That is a big question.  On the one hand, some worry that the lack of housing will continue to drive up costs and make Davis a hamlet of only the very rich.  On the other hand, others worry that Davis is already producing a huge demographic shift toward university student residents and away from productive working community members with families who have ties to school.

A reader wrote in the other day, noting, “The amount of new housing you covet would not make a dent to satisfy the demand;  and a quantity that might reduce prices enough would almost certainly destroy our small city.”

To which I largely agree.  But the tricky problem is what happens if the course continues unchanged – what does this community look like in 20 years?  Who lives here?  How do we finance basic city services and infrastructure?

These are questions that the leadership in this community and its residents must address.  The numbers right now are very telling.  The path forward is less clear.

73 thoughts on “Analysis: Statistics on Commutes Show a Massive and Growing Jobs-Housing Imbalance”