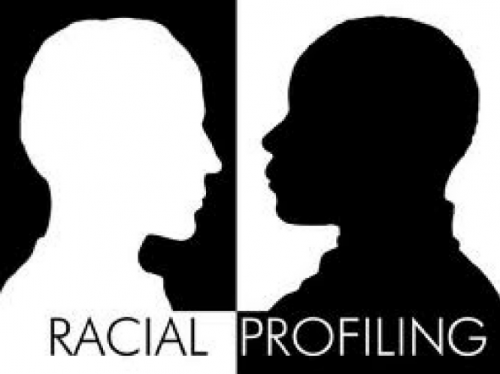 The police have been warning residents about a string of burglaries.  As one local TV station reported, “Davis residents are being warned after 15 homes were burglarized and ransacked during broad daylight while people aren’t home, police said Thursday.”

They reported, “Davis police dispatch took a call Wednesday from someone who said a man knocked on the door and when the resident answered, the man asked for Jerry. However, no one named Jerry lives at the house.

“Within an hour, two nearby houses were burglarized. The burglar cut the window screen to get into the homes, which were ransacked, investigators said. This happened near Slide Hill Park, off East Covell Boulevard.”

Police say this scenario has played out at least 15 times since July 3 with all of the burglaries taking place during the day while people are at work.

“The suspect goes up to the front door, knocks on the door, asks for somebody by name who does not live there, and that’s how he determines whether or not somebody’s at home,” said Lt. Paul

Doroshov with the Davis Police Department told one station.

Davis Police also warned that burglars are entering through screens where the windows are open.

“We ask that you please don’t leave your first floor or accessible windows open when you are not home,” a Facebook post said. “If someone comes to your door and asks for anyone who does not live at your residence, please gather as much information as you can on the appearance of the person and immediately call the Police Department at 530-747-5400.”

But when people are on high alert, they often resort to measures such as racial profiling.

For example, the description of the suspect caught on video allegedly burglarizing a home “is described as African-American, 6-foot tall and drives a newer white model 4-door sedan.”

That is the type of vague description that has led in the past to incident of racial profiling.

For instance one social media group posted the description as an “African American male around 6ft with long hair or dreadlocks” walking around in neighborhoods.” 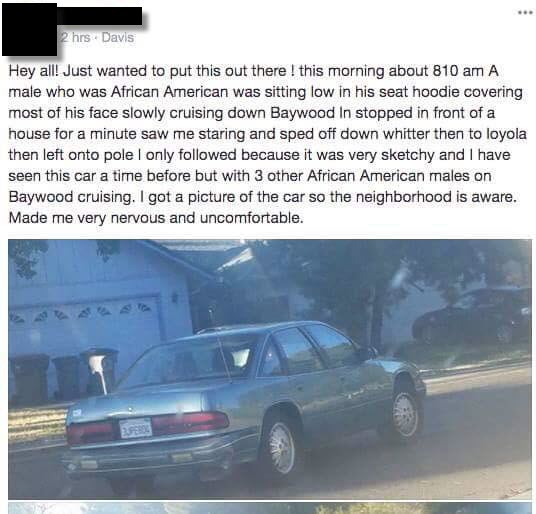 This was posted on social media on Thursday, for example.  The car interestingly doesn’t match the vehicle description, but the person sees “a male who was African American was sitting low in his seat hoodie covering most of his face slowly cruising down Baywood … stopped in front of a home for a minute saw me staring and sped off down [Whittier] then to Loyola.”

The poster says, “I got a picture of the car so the neighborhood is aware.  Made me very nervous and uncomfortable.”

Reminds me that a few years ago there was another rash of burglaries that led to a 911 caller reporting a walking salesman who happened to be African American as a possible burglary suspect.  That led to the police combing the neighborhood in West Davis for a possible suspect where one veteran officer found Eli Davis, a 60-something-year-old African American who was mowing his lawn.

However, the officer started to question Mr. Davis and even asked for his ID before deciding that the man probably lived at the home and therefore was not the man he was looking for.

On one level we can criticize the officer for both failing to use common sense and also poorly handling the encounter, leading Mr. Davis to feeling very violated.  On the other hand, we have faulted the community for filing such a vague report and racially profiling an individual who was traveling salesman.

The danger is that the current description of the burglary suspect is equally vague.  We don’t know age or build or any real descriptions other than six feet tall and African American, which will likely lead to many African Americans in this city being pulled over, or as in this case photographed and followed.

In the photograph above maybe the witness saw what she said she saw.  Or maybe she was afraid and her mind became vivid with imagination, or perhaps her own actions caused the man to speed off.  We don’t know.

Share:
Tags:BurglaryDavis PoliceRacial Profiling
Previous : My View: How Injustice Occurs in the Legal System
Next : My View: The Housing Problem Will Not Be Easily Solved

31 thoughts on “Analysis: Threat of Crime Leads to Racial Profiling in Davis”