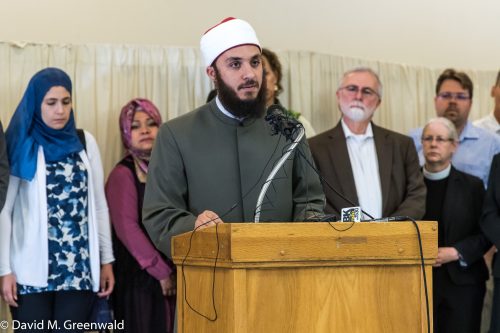 On July 21, 2017, Imam Ammar Shahin delivered a sermon at the Islamic Center of Davis, California. In it he cited the hadith, according to which the Muslims would fight the Jews on Judgment Day, and prayed to Allah to “liberate the Al-Aqsa Mosque from the filth of the Jews” and to “annihilate them down to the very last one,” not sparing any of them. “Oh Allah, make this happen by our hands. Let us play a part in this,” he prayed in the sermon.

Initially, the Davis Islamic Center attempted to divert attention away from the actual content of Shahin’s words and instead blamed the messenger saying that the imam’s comments had been taken out of context by “Islamophobic news organizations.” When it became clear this was not the case, the imam issued a half-hearted apology with no pressure to resign.

In what day and age do we live that an influential religious leader and educator can preach hate and genocide from his pulpit located only a few feet away from a major university? Many who wanted a stronger response were silenced. That is, until the Davis City Council meeting on September 12 where supporters stood in solidarity and spoke against Shahin’s hateful words and the woefully inadequate response. I too had the opportunity to address the council:

I chose to come and speak here today because I am deeply concerned with the normalization of Jew hatred that is taking place in our local communities, our state, our country, our world in fact, and on BOTH sides of the political spectrum.

Make no mistake, if a religious leader from the Christian community walked up to his pulpit and spoke of all black and brown people as filth and that we need to find them and murder them, the

condemnation would be swift and unambiguous. Hundreds if not thousands of people would show up to protest. Social media would be flooded and they would demand that this “holy man” be fired from his position. I have no doubt of that. And this would be the right thing to do, given the gravity of his inciting and hateful words. Naturally, Jews and Muslims would be included in this configuration of hate as well.

This would not stand nor should it, period!

But somehow when it comes to antisemitism, the response is often akin to “meh”, minimization, obfuscation and excuses. “Imam Shahin didn’t really say that, did he?” “Oh, he was just speaking figuratively, not literally.” “He is only quoting scripture, he doesn’t really mean that himself.” Then, I would be accused of being reactionary, of misinterpreting his words and would likely be called an Islamaphobe.

In fact, this IS what happened to me.

The truth is, what Imam Shahin said and did harms not only the Jewish community, it also puts Muslims at risk because it satisfies the worst stereotypes of hateful people who are just looking for something to attack. And after what happened in Charlottesville if anyone doubts this, then you’re not listening.

I watched with interest every public response to Imam Shahin’s words of mass murder that I could find. The best way to describe what happened was that excuses were made on his behalf, he was insulated, protected, and treated with kid gloves. His apology fell far, far short.

Instead, he should have profusely apologized and immediately resigned and then taken time to honestly contemplate the seriousness of his actions.

It is not too late for this community to reflect and take a different course of action that sends the required message that this kind of hate will NEVER be tolerated.

Susan George is an activist, budding playwright, and political junkie. She currently serves as an Assembly District Delegate to the California Democratic Party and was a delegate for Bernie Sanders to the Democratic National Convention in 2016. She lives in Vallejo, California in the beautiful San Francisco Bay Area with her partner Matthew and dog Lenny.

30 thoughts on “A Call for Jewish Genocide in Davis, California? Meh.”