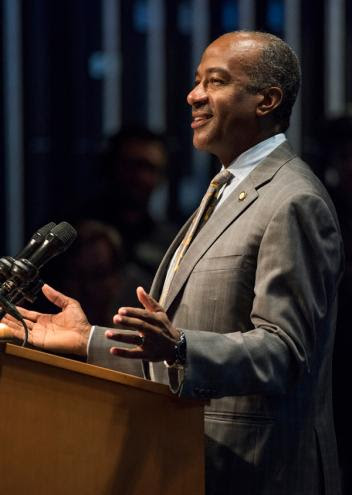 (From University News) – The University of California, Davis, began its new term today (Sept. 25), at a welcome event, entitled “Future Forward,” where Gary S. May delivered his first major address as the university’s new chancellor. The event also included spoken-word presentations by students, as well as videos celebrating the UC Davis community.

Students, faculty, staff and community members packed Jackson Hall at the Mondavi Center for the Performing Arts for the fall welcome. The event was also livestreamed.

Chancellor May shared some of what he’s learned from the community since taking the helm on Aug. 1. “Our stakeholders are very passionate about UC Davis. They feel very strongly about their connection to us. They feel very close to their UC Davis family long after they graduate and are nostalgic about the campus grounds — the Quad, the arboretum, the water towers. And they want us to be successful. They want us to be a leader.”

Chancellor May said he is honored to serve as chancellor of UC Davis during what he believes is “the most exciting chapter of its history.”

“As chancellor, I get to be head cheerleader for a university that has so much going for it, a university on the rise with exceptional capabilities to address the humanitarian crises of our time, be it health care or public health, immigration or climate change, poverty or environmental impoverishment.”

This morning’s audience included some of the university’s 9,165 new freshmen and transfer students. “Why are they all coming here? Why UC Davis?” May asked. “I bet their reasons are much the same as mine.”

First and foremost, he said, UC Davis has an excellent record in teaching, scholarship and research. “Students know that a degree from UC Davis is a golden ticket,” he said. “They know that success

here puts them on the road to success in the job market and fulfilling careers.”

He said other factors that brought him to UC Davis included the university’s reputation as a “socioeconomic escalator” for students from all backgrounds, and contributions to the “public good.” Washington Monthly magazine recently gave UC Davis top-10 rankings in both categories.

Chancellor May also cited the university’s strong commitment to diversity among students, faculty and staff. “As of last fall, our enrollment of new undergraduates from historically underrepresented ethnic groups –– African American, American Indian and Chicano/Latino — stood at 26 percent,” and this year’s entering class is expected to be the most diverse ever, he said.

He reiterated his opposition to the Trump administration’s decision, effective this coming March 5, to end DACA, the Deferred Action for Childhood Arrivals program, under which immigrant students are protected from deportation.

“At UC Davis, we open our doors to the world and give the best and brightest a chance to shine, no matter where they happened to be born,” May said. “Abandoning DACA runs counter to our principles of open and equal access to higher education for students of all backgrounds.”

A commitment to excellence

May talked about his interest in a strong partnership between UC Davis and the greater Sacramento region. One idea he is exploring is the development of an innovation hub called Aggie Square, modeled after Atlanta’s Tech Square, which May helped bring about during his time as Georgia Tech’s dean of engineering.

The innovation hub is likely to be included in a UC Davis strategic plan, “To Boldly Go,” a title selected by the chancellor “to set a tone that UC Davis is moving forward with confidence and a commitment to excellence like never before.”

“To Boldly Go” is a signature line from Star Trek — May is a fan of the sci-fi classic, as well as superhero comics, with a collection of some 13,000. “The fact is that the X-Men, the Avengers and Justice League are using their powers for good, and that continues to appeal to me,” he said.

“The way I live my life is that I try every day to learn something, to help someone and to make the world better — and I challenge everyone here to do the same.

“I don’t want UC Davis to be a place that only trains and educates students. I want us to actually empower them –– like superheroes –– to be agents of their own success, career and destiny, and to do some good in the world.”