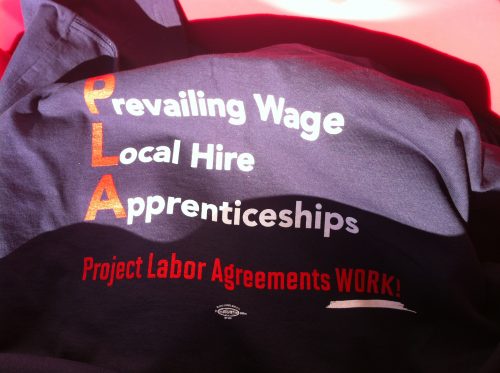 On Tuesday night about one or two dozen members of the Carpenters Local Union came out to push for a labor agreement for the Mace Ranch Innovation Center (MRIC).  Patricia Ramirez, a field rep with the Carpenters Local 46, spoke on behalf of the group and at this point they are opposing this project.

As she explained, “You have a developer that has failed to commit when it comes to some of the core values of Davis.  A commitment to hiring locally or having proper training with the use of a joint labor apprenticeship.

“Until the developer can make a commitment to these core values of Davis, we strongly oppose this development and we hope that you do as well,” she said.

Robb Davis, who will not seek re-election, summarized what he heard from his colleagues when he noted that the three members of this council who are going to be on the council for the next three years “have said to the developers, we’re not real happy with what we see with labor.”

But the importance of this goes beyond the wishes of the city council.  In order for this project to be approved, the voters of Davis must pass the development through a Measure R vote.  As

everyone reading this knows, that is a tall order.

As Rochelle Swanson put it, this will be “a very high bar” and it will be “vetted and approved by this community.”

Look no further than the Nishi election to see the importance of this issue.  Nishi went down to defeat rather narrowly by only 600 votes.  A key turning point might have been on the issue of affordable housing.

It was not just no-growthers who opposed Nishi.  Take Martha Teeter, a retired UC Davis professor and an advocate for helping the homeless find an innovative solution to housing issues.  She is not what you would call a no-growth advocate – far from it.  In fact, she works with an interfaith group on housing solutions for the homeless.

She pointed out, “The City Council exempted Nishi from in-lieu fees of $11.5 million for affordable housing.”

One of the key variables in the Nishi election was the presence of a large number of highly progressive voters who came out to support Bernie Sanders in the June election.  Initially we believed that that might bode well for the project, as a lot of students who were in desperate need of housing would come out to vote.

But it did not prove to be a net plus for the project, as many of the progressive voters, even students, turned against the project due to what they saw as a failure to deliver on affordable housing.  In fact, many of those same people came to the council meeting last spring to advocate for Sterling, which had a separate and sizable affordable housing component.

What we have seen in the months since November is the emergence of a new progressive wing in Davis.  There are a number of groups that have come forward to “resist” the new Trump administration, but they have also adhered to the notion that all politics is local.  We have seen Indivisible Yolo, for example, make their presence felt this past spring on the issue of the ORR (Office of Refugee Resettlement) program.

The county’s proposal for an MRAP (Mine-Resistant Ambush Protected vehicle) was in part defeated as large numbers of Davis progressives filled the Board of Supervisor’s chambers in opposition to the MRAP.  We have seen starting in the spring a number of progressive groups ranging from People Power to other more ad hoc groups coming out in support of police oversight and in opposition to the handling of the Picnic Day situation.

These groups are large, they are active, and they are making a difference – at least at the local level.  And many of them are mobilized around concepts like affordable housing and renters’ concerns.

The new progressive movement in Davis is very much focused around social justice issues, which is why the lack of a labor agreement should be viewed with concern.  Unlike the old guard progressives that have turned against growth in the city of Davis, the new wave seems more concerned with issues like social equity and affordability.

They may well come out in favor of an innovation park proposal that can help bring in skilled jobs for college graduates and university researchers, but they won’t do it if it means crossing union opposition.

There is a new movement afoot in Davis and a new group of very progressive activists ready to make a difference.  If the MRIC can tap into that energy, it might be able to break through the barriers which have befallen previous land use decisions, but that will not happen if there isn’t a labor agreement.

I firmly believe that, but for the failure of Nishi to have a more reasonable affordable housing component, many of the progressive Bernie supporters would have lined up in support of that project.  But without affordable housing it was easy for them to come out and vote in opposition.  It would have taken 300 or so people to flip their position to have changed the outcome of that election.

MRIC is going to have opposition – we have seen it from those who oppose growth on the periphery and those who believe that the EIR certification was poor public process.  However, that is opposition that can be overcome if the new energy from the progressives can be tapped into.

The labor folks who came out on Tuesday are not going to go away, but with a good agreement they can become strong advocates to help link with the broader progressive movement re-emerging in Davis and Yolo County.