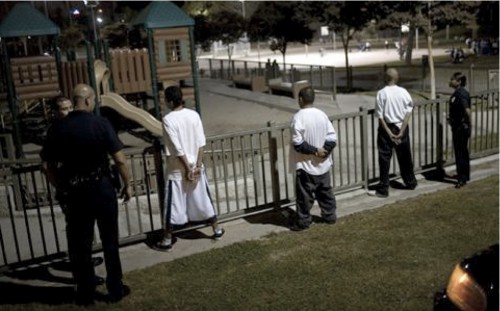 Eric Lovett in February of 2015 was facing charges for being an accessory to attempted murder for the November 2014 shooting by Michael Reyes, who has long since been convicted and sentenced to life for that shooting.

However, while in preliminary hearing, a sheriff’s deputy noticed Lovett allegedly making hand gestures that he considered a threat to the complaining witness.

Mr. Lovett was subsequently charged with dissuading a witness and his case severed from the co-defendants.  That is when the bizarre case really took shape.

The lengthy trial brought a decision that stunned most people involved.  The jury hung 8-4 for acquittal on the main charge of accessory to murder after the fact, but convicted Mr. Lovett on the charge of dissuading a witness and committing that felony for the benefit of a criminal street gang.  The DA subsequently dismissed the accessory to commit attempted murder charge.

In the DA’s press release, they explained that Mr. Lovett is a three-striker, having been convicted of committing two prior strike offenses.  “In 2004 Lovett was convicted of Assault with a Deadly Weapon in Yolo County and in 2010 he was convicted of Criminal Street Gang Activity in San Joaquin County.  He also has served five prior prison sentences.”

Based on the conviction and his past crimes, Mr. Lovett faced 45 to life in state prison.

Officer Anthony Herrera testified that on February 19, 2015, he had witnessed Mr. Lovett make gestures toward Ernie Sotelo as Mr. Sotelo testified, and the officer interpreted the gestures as threatening.

Officer Herrera claimed he saw Mr. Lovett “do it over and over again.”

The jury’s conviction was particularly stunning because several independent observers, having seen the video, believed the evidence that it was a threat was questionable at best.

In March 2016, when Judge Dan Maguire agreed to quash a third subpoena for courtroom staff, he noted in his ruling that the existence of courtroom video was crucial.  He said that what the video shows is “subject to interpretation.”  He even acknowledged that the first time he watched the video, he didn’t see anything.

Rod Beede, a counsel for a co-defendant, at a trial setting conference in July 2015 said that it “would be hotly contested what, if anything, Mr. Lovett did when the witnesses (sic) was on the stand. My entire staff and I looked at the tape two or three times and it was confusing at best.”

Judge David Rosenberg was similarly equivocal on the content of the video.

“I saw Mr. Lovett make certain movements with his hand, which frankly surprised the Court, took me aback,” the judge stated.

He held Mr. Lovett to answer to the charges on December 14, 2015, but reasoned that a jury “could readily determine that Mr. Lovett was just fidgeting, but I also believe that a jury could determine that he was making motions like a slashing of a neck to intimidate a witness that was on the stand.”

The case was always going to be interesting because there were separate decisions, by a variety of judges, to exclude testimony of Judge Paul Richardson, Deputy DA Amanda Zambor and Court Reporter Abby Waller-Reisig (wife of DA Jeff Reisig).

In his ruling last year, Judge Maguire ruled that Ms. Reisig, according to her declarations, had nothing to offer as to what happened, as she claimed not to have seen anything.

He offered the “dog that didn’t bark evidence” because she (Ms. Reisig) doesn’t remember seeing anything that is potentially probative. He said that that can be evidence, but he has no reason to think that the dog wouldn’t bark. He said the absence of the evidence isn’t relevant, stating there was nothing to take notice of.

The capper is that in February 2017, Judge Dan Maguire overturned the conviction based on a June 2016 Supreme Court decision in People v. Sanchez that changed the way hearsay evidence could be admitted concerning a defendant’s gang membership.

Mr. Lovett was defended by Martha Sequeira of the Yolo County Public Defender’s office, who will be one of the speakers at the Vanguard November 4 event, “In Search of Gideon,” talking, among other things, about gang cases.

Tickets to this event can be purchased for $50 general admission or $20 for students and people with economic hardships: http://insearchofgideon.eventbrite.com

For more information on this case, see: