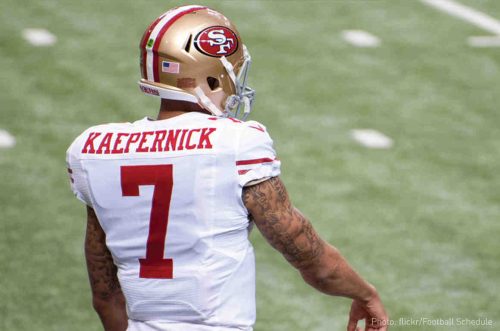 Colin Kaepernick has not been involved in “off-field” scandals, has committed no crime, and has donated almost $1 million to community organizations over the last year, yet the former San Francisco 49ers quarterback is considered an outcast for kneeling during the national anthem.

Some say it’s because football is no place for politics. Not true. Gameday at every American stadium includes people waving signs endorsing candidates and offering literature for this or against that. Singing the anthem while jets fly overhead is a political moment. On the field or in the stands, standing at attention with your hand over your heart is a political statement.

Politics at football games is as American as apple pie.

Some say kneeling for the anthem shows disrespect. Respect and love for America doesn’t require blindness to America’s failure to honor its promise of racial justice and equality. Does standing for

the anthem mean these failures don’t matter? Does standing show pride that America waited 89 years after the Civil War to acknowledge that Blacks were “good enough” to go to school with whites? How proud are we that in 2017 America’s schools are just as segregated as in 1954?

Kneeling for the national anthem is not lack of support for America’s successes any more than standing for the anthem is support for America’s racial justice failures. As Kaepernick’s 49ers teammate, Eric Reid, put it: “What Colin and Eli (Harold) and I did was peaceful protest fueled by faith in God to help make our country a better place. And I feel like I need to regain control of that narrative and not let people say what we’re doing is un-American. Because it’s not. It’s completely American.”

Kaepernick silently knelt, making no attempt to disrupt the singing of the anthem. He did not try to prevent anyone from standing. This textbook nonviolent protest is totally American.

Some say Kaepernick disrespected the military. Recognizing America’s failure to achieve racial justice and equality shows no disrespect for our military. Our military heroes fight for freedom, for the principles of racial equality and justice, not for a song or a flag. We honor them most not by singing a song but by respecting the values they fight to protect.

In 1939, Mary Bethune said about Black soldiers, “We have fought for America with all of her imperfections. Not so much for what she is but for what we know she can be.” Kaepernick is asking us to realize our true potential.

The anthem, after all, reflects America’s early connection to white supremacy. The third verse celebrates the murder of slaves:

“No refuge could save the hireling and slave,

from the terror of flight, or the gloom of the grave.

And the star-spangled banner in triumph doth wave,

o’er the land of the free and the home of the brave.”

When the anthem celebrates the murder of your ancestors, maybe it is time to remind people of American values.

In demonstration of complete ignorance of Martin Luther King Jr.’s teachings and beliefs, Clemson University’s football coach Dabo Swinney claimed King would not have supported Kaepernick. Anyone with actual knowledge of what King stood for knows he would have rejoiced at a rich, Black athlete risking fame and fortune by nonviolently protesting for justice. If college athletes are being taught something different it is blasphemy, not truth.

Kaepernick isn’t the first athlete to speak out, though he does it without the perils to those who came before him. John Carlos and Tommie Smith raised fists and were kicked out of the Olympics. Muhammed Ali refused to step forward in his draft line; he lost his title. Jackie Robinson was in a WWII segregated military unit and refused to stand up when he was ordered to the back of the bus, taking a court-martial instead.

Today Robinson is an American icon. No player in Major League Baseball wears number 42 —  except for one day of the season when all players on all teams wear it.

Robinson wrote about his first World Series game: “There I was, the black grandson of a slave, the son of a black sharecropper, part of a historic occasion. … As I write this 20 years later, I cannot stand and sing the anthem. I cannot salute the flag; I know that I am a black man in a white world. In 1972, in 1947, at my birth in 1919, I know that I never had it made.”

Kaepernick surely had it better than the Black athletes who came before him, but there simply is no denying how pervasive racial injustice remains in our country. His critics might not want to be reminded of racial injustice while watching football, but imagine if they had to live with it.

Share:
Tags:ACLUColin KaepernickNational AnthemRacism
Previous : Sunday Commentary: The Student Housing Crisis and Where It Currently Stands
Next : Systemic Injustice – The Follow Up

11 thoughts on “Kaepernick Stood Up for Justice by Kneeling”