When I send my officers out each day I say to them “Just come back alive.  Make sure you come back.” (pauses) I am not sure that that should be my biggest concern but that is what I think about every day.

Police Captain at a community forum on policing

I have two adult male children—brown children.  When they leave the house, I say “Be careful out there.  If you get stopped by an officer get down on your face. Do not give them any reason to harm you.  I want you to come back to me.” 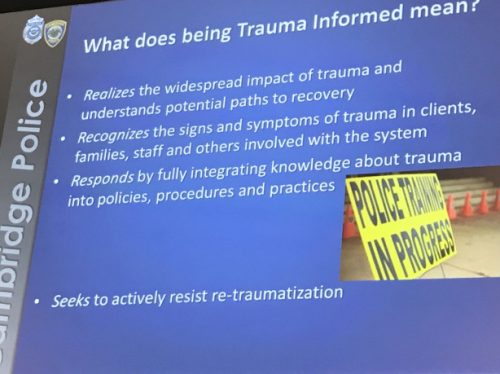 And so, this is where we are: the police and the community encountering one another in fear.  I am not sure what good can come of this.

I participated in a fascinating forum about “trauma-informed law enforcement” and before it began I wondered whose trauma we would be discussing: victims of crime, police, or other community members?  It turns out the conversation was about all three, and I left wondering if trauma-based analysis might, perhaps, point to a way out of the mutual fear, and the attendant hostility that seems to be a growing feature of our police/community encounters.

I know—this is an over simplistic dichotomy, but this is how I experience the discourse on policing today.  And maybe the dichotomy is not too simplistic if one considers the sources and content of the quotes above.

So, let’s talk about trauma. *

Many (if not the majority) of police encounters with community members include some form of trauma. After all, people call the police typically when something has gone wrong.  Victims, by definition, have experienced a traumatizing event. Even small crimes against people or property can leave people feeling vulnerable and wondering if it will happen again. The more serious the crime (or even a close encounter with such crime) the deeper the physiological response; a response that can be debilitating in the short and longer term.

At times, trauma might be caused by the encounter with a police officer itself.

At times it is long-term, carried by community members because of adverse childhood experiences or ACEs, exploding in violence against others or self-harm.

Officers too experience trauma.  They experience it in the often-horrific stories they hear time and time again from victims, from threatening experiences, from viewing dead or severely injured human bodies, and from pulling up on a call with uncertainty born out of vague descriptions of what they are about to encounter (man in possession of multiple weapons, shooting victim with unknown injuries, etc.).

And so, we find ourselves in a situation in which it is not unusual for BOTH parties in a police/citizen encounter to be experiencing, or having had experienced, trauma—acute or chronic. We are learning more about what trauma can do to a person in terms of actions and reactions; responses to trauma are rarely “healthy” or neutral.

A few anecdotes on trauma from the (female, African American) Supervisor of the Cambridge, MA Police Department:

These anecdotes could be and are being repeated over and over in communities across the nation.  Police in Davis, after obtaining a mine resistant, armor-protected vehicle (MRAP), expressed their conviction that such an object was necessary to protect them and the community in a variety of situations.

These stories are not about Cambridge they are about all of us.

I share the first anecdote to remind us that our police, while granted significant powers and a monopoly on the use of force, are human.  They face trauma and, arguably need help in dealing with it.

I share the second anecdote to help explain why things seem to go wrong far too often in encounters between officer and community members.  Can we understand these things?  Can we acknowledge that we are dealing with real human problems that must be addressed?

Perhaps what I am suggesting, and I have not fully played this out in my mind, is that trauma-informed law enforcement must go hand in hand with trauma-informed police oversight.  The question must always be: “what will lead to just outcomes and healing in our communities?”

I invite feedback on these issues.

*  Definition of trauma from the American Psychological Association: Trauma is an emotional response to a terrible event like an accident, rape or natural disaster. Immediately after the event, shock and denial are typical. Longer term reactions include unpredictable emotions, flashbacks, strained relationships and even physical symptoms like headaches or nausea.

39 thoughts on “Our Police, Ourselves”