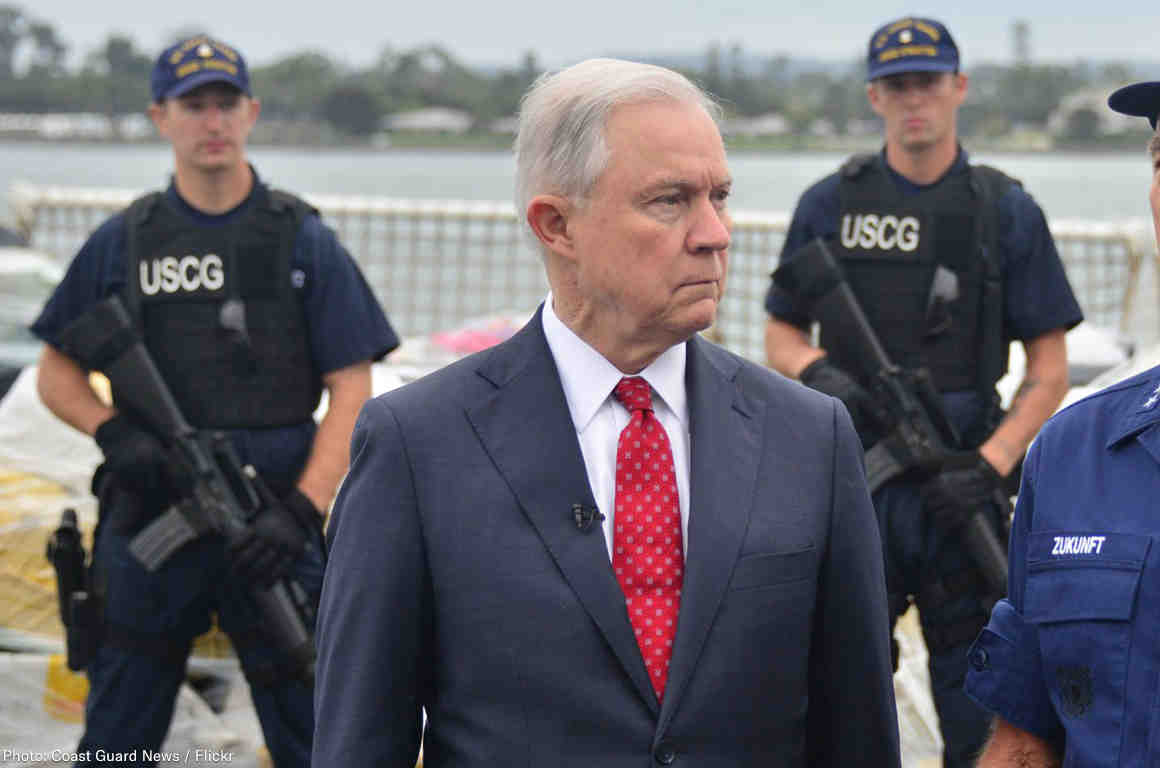 As President Trump spends his time denigrating black NFL players and their allies who are protesting police brutality, racial inequity, and a broken criminal justice system, Attorney General Jeff Sessions is working hard to make these problems even worse.

Earlier this month, Sessions ended a federal police oversight program widely shown to be effective in curbing abusive policing. That follows Sessions’ announcement earlier this year that he was reexamining all Obama-era agreements between the Justice Department and troubled police departments, a move widely expected to result in the termination of these agreements or to render them toothless by refusing to enforce them.

Nearly everyone — from former Justice Department lawyers to law enforcement leaders to academics to activists — has rightly condemned this abdication of federal oversight. For many American cities, when it comes to fixing broken policing, the feds are often the only game in town. But that has to change. Effective oversight of police departments has to be community-based. It’s time to demand that state and local prosecutors step up when it comes to monitoring police actions and practices.

In defending their agreements with police departments, Justice Department leaders in the Obama administration

police-reform.html”>pointed out that the “civil rights division uses its authority wisely, in only a small fraction of the nation’s more than 16,000 law enforcement agencies.” That fact shows the extraordinarily limited capacity of the federal government to rescue local communities from failing police departments.

Over eight years, the Obama Justice Department opened 25 investigations and entered into 14 reform agreements with local law enforcement agencies. There are dozens — if not hundreds —of agencies that need intervention and oversight. The task is well beyond the resources of a Justice Department, even one committed to reform. The remedies must be local. That starts by making locally-elected prosecutors accountable to the communities most affected by police abuse.

Scandal after scandal has revealed that many prosecutors simply turn a blind eye to misconduct by police officers with whom they interact on a daily basis. Conversely, prosecutors who are committed to achieving justice — not just convictions — have extraordinary powers to detect and address police abuse.

Empowered voters can ensure that their local prosecutor will take police misconduct seriously.

Every prosecutor’s office should create civil rights or public integrity units that are dedicated to investigating and prosecuting police misconduct in a fair, transparent, and independent manner. They must take a leadership role in publicly demanding that the police departments they work with fix systemic problems. They should decline to prosecute cases where there are clear patterns of racially biased policing or other abuse. They should refuse to rely on police officers whose records show demonstrated bias, credibility, or the use of excessive force. And they should carefully track police officer misconduct and ensure that assistant prosecutors and defense attorneys have full access to that information in any criminal case.

At the state level, attorneys general should create recommendations and guidelines for local prosecutors to ensure police accountability. They should also be aggressive in opening civil rights investigations of local police departments that are alleged to have engaged in patterns of abuse or other misconduct. If new legislation is required to empower state attorneys general to investigate and remedy patterns of civil rights abuses by police, communities should demand that state legislators pass laws to give AGs that authority.

Finally, voters can play a huge role in reforming the criminal justice system by holding prosecutors accountable. In 2016, voters demonstrated their power by electing reform-minded prosecutors in several cities, many of whom have since taken steps to improve their office’s role in ensuring police accountability.

The ACLU Campaign for Smart Justice, in partnership with local ACLU affiliate offices, is committed to providing voters with the information they need to hold their local prosecutors accountable. Our initiatives include the “Meet Your DA” campaign launched by the ACLU of California, the ACLU of Oregon’s “They Report to You” campaign, and the ACLU of Pennsylvania’s effort to send formerly incarcerated individuals to canvass voters in advance of a primary election for district attorney in Philadelphia.

Empowered voters can ensure that their local prosecutor will take police misconduct seriously. That is one of the best ways to fill the accountability vacuum that Sessions’ recent actions have exposed.

Share:
Tags:ACLUJeff SessionsPolice Oversight
Previous : Commentary: Thoughts on the Departure of Dirk Brazil and the Needs of the City Going Forward
Next : Commentary: AG’s Office Looks Other Way at Orange County Wrongdoing