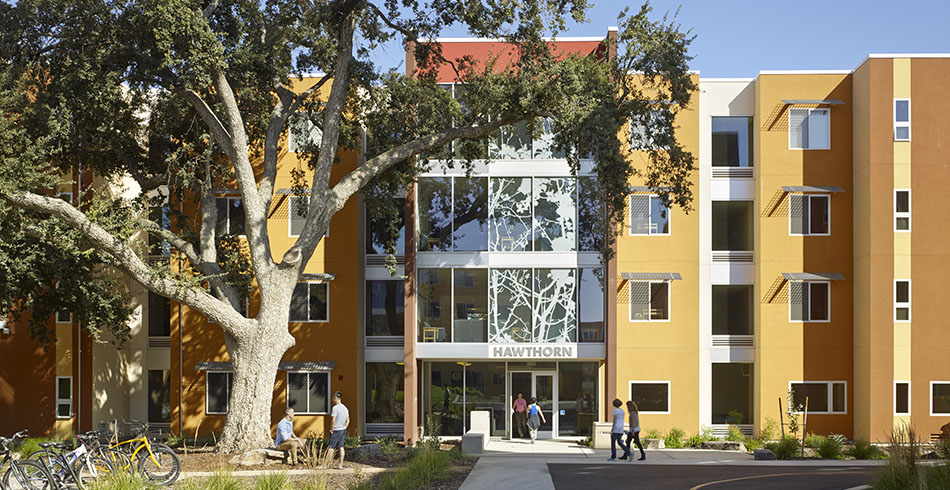 On Wednesday, the Vanguard will have a broad range discussion on the student housing crisis at UC Davis.  In advance of this, I wanted to lay out the current state of where this discussion stands and my current thinking on student housing.

(For those who are regulars of the Vanguard, much of this section will be simply a recap of past discussions, so I would encourage you to skip to the comment section and copy and paste your most recent comment and then go outside and enjoy the nice fall weather today).

City of Davis position (December 2016 letter): “The City requests that UC Davis provide for a minimum of 100 percent of the projected enrollment of all new incoming students starting with the 2017 academic year and at least 50 percent of total UC Davis campus student population in the LRDP. The City further requests that UC Davis develop an accompanying construction and financing implementation strategy to ensure the delivery of these units and facilities in a timely manner.”

Yolo County Board of Supervisors position: “The draft UCD LRDP should be revised to include capacity to accommodate a minimum of 50 percent of the UCD total student population in

campus housing commensurate with UCD’s growth, no later than the 2027-2028 academic year and preferably well in advance of that date.

“The draft UCD LRDP should be revised to include capacity to accommodate 100 percent of campus enrollment growth including all new incoming students.

“To make more efficient and effective use of campus land and facilitate achievement of the university’s sustainability goals, the draft UCD Long Range Development Plan for the years 2017-2027 should be amended to increase the density of on-campus housing by increasing the height of new campus housing to a minimum height of five to six stories.”

UC Davis as expressed in July, 2017: (From Matt Dulcich, UC Davis’ Director of Environmental Planning who will be participating in Wednesday’s discussion): “We are continuing to examine opportunities for additional housing within our draft LRDP land use plan during the first stages of the environmental analysis which is currently underway.”

He continued, “We will include as much additional housing capacity as is realistically achievable in the LRDP timeframe, once we have completed our examination of those opportunities later this 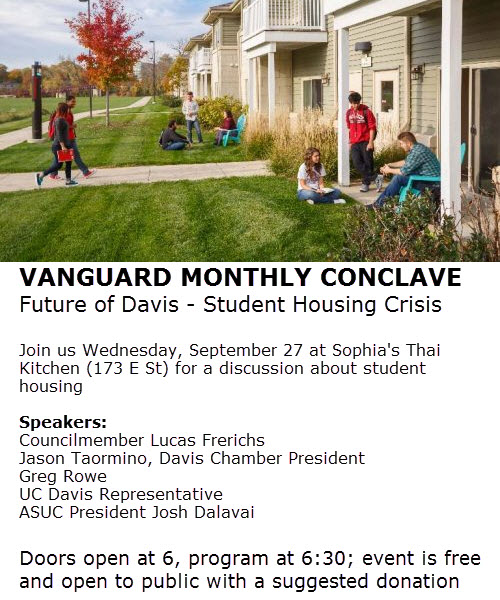 “That effort may result in a revised LRDP housing projection that would proceed as the proposed project through the environmental analysis process,” he wrote.  “And, through implementation of each new project, we will continue to re-examine the density question and attempt to provide as much housing as possible at each specific site.”

Mr. Dulcich further added, “Even after adoption of the new LRDP, if we are successful with new housing projects achieving higher densities than we are currently anticipating, we may eventually see a realistic option to building more than the total LRDP projection.

“If so, our options for adding more housing to the LRDP would be fairly simple.  We could expand the amount of anticipated housing with an updated LRDP and updated environmental analysis.”

Finally there is the question – what do the students themselves want?

For their part, ASUCD in a resolution “believes both the City of Davis and UC Davis should plan and/or prioritize projects that provide affordable housing options to students, staff, and community members in order to combat this housing crisis and its current and future repercussions.”

As one student pointed out during public comments in April, “I struggle from April to August to find a place to live in Davis and I had to prepare myself to be homeless if I could not find a place.”

Samantha Chiang, then ASUCD Senate President Pro Tem, said that many students are “forced to start their housing search in November of their first year, only to not find a house and be forced to couch surf in the following year.  We cannot be pawns in the game between the city and the university – we are consistently advocating on both ends to increase housing.”

In the Vanguard interviews with three students last May (Daniel Nagey is an ASUCD Senator, Sara Williams is the External Affairs Commission Chair, and Georgia Savage is the director of the Office of Advocacy and Student Representation (OASR)), we had a range of thoughts.

Sara Williams made the point, “We have been talking about how students would prefer to live on campus, but I really don’t want to go as far as to say that we would love to live there for all four years…

“That is what I want so badly for the university to step up on – housing 100 percent of the growth that they see in the long range development plan,” she added.

Daniel Nagey said, “That’s what we want to see, at least 50 (percent of the students on campus) if not more.”

Georgia Savage pointed out, “The relief has come from the city – it has not come from the school.  And the receptiveness to the looming problem of student homelessness, and the response to that, has largely been from our city versus the school (with which) we have also had these meetings and (are) pressuring.”

“They do give us a sense that they’re listening – it’s just that we never see anything come of those conversations,” Sara Williams said.  “We’ve been talking about this since fall.”

The Vanguard has been quite clear over the past couple of years on the issue of housing at UC Davis.  We believe that UC Davis needs to build more housing on campus than it has.  The reality is that UC Davis is in fact proposing to increase its on-campus share of housing from somewhere in the 29 to 31 percent range to 40 percent of overall students.

The Vanguard has consistently argued that 40 percent of overall on-campus housing is not enough and that UC Davis needs to go to 50 percent.

Beyond this position it is important to understand the numbers here.

Right now the university in its Long Range Development Plan is proposing building about 6200 new beds for campus.  The university is projecting, within ten years of growing, to be at just under 40,000 students.  So the gap between the 40 percent proposed now and the 50 percent that we prefer is about 4000 beds.

So, in effect, what we are arguing is that there need to be about 10,000 new beds for students in the next ten years.  Right now – even before additional campus growth – the city has a 0.2 percent vacancy rate which means, at any given time, of the 9969 units that were surveyed in the report (accounting for 83 percent of all multifamily housing stock) there were less than 30 units available to rent.

As we heard in April, the situation is bad for students renters, particularly low income students, and it is getting worse.

The problem we have is that right now the university is only committing to cover about 62 percent of the housing needs of those 10,000 beds.  Moreover, the first housing units at West Village are not projected to be online until 2020 at the earliest, and 2021 or 2022 is probably a more reasonable arrival time.

Prior to the approval of Sterling, the city had not approved a market rate student housing complex in over a decade.  This fall they will have a chance to approve Lincoln40.  While there are other proposed developments which might accommodate students, these are the only two that are exclusively student housing.

If they get approved and built, they will likely accommodate about 1500 students total.  In short, the approval of Sterling and Lincoln40 means the city will be taking on about 15 percent of the new student housing, leaving the 85 percent for the university or other communities.

To add to that point – one of the things that concerns me is that putting 10,000 additional student houses on the UC Davis campus and on the edge of town is going to create service and infrastructure needs.  Is the university going to then develop restaurants, grocery stores, and retail to serve the students?

Are they going to create in effect a mini-city of 10 to 20,000 on the edge of Davis, and what impacts will that have on the community?

It is easy to state that UC Davis has all this land to put housing, but more difficult to ascertain the impact of that on the city itself.

This is not to say that UC Davis should not develop more student housing, but only to attempt to steer us toward a discussion as to what that impact will be if they do build a ton of new student housing.

So join us on Wednesday…

Our discussion will focus on the student housing crisis in Davis.

Joining us to discuss this issue:

16 thoughts on “Sunday Commentary: The Student Housing Crisis and Where It Currently Stands”