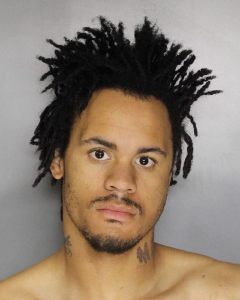 City of Sacramento police officers – at the preliminary hearing Friday of a man accused of attempted murder – testified they did not wear body cameras and failed to activate vehicle dash cameras during a Del Paso Boulevard pursuit and “shoot ’em up” last February 10.

And, at least one officer was forced to admit in Sacramento Superior Court Judge Delbert Oros’ courtroom that the officer may have shot at the back of the suspect, Armani Lee, as the 28-year-old was running away from police.

“I was scared and trapped in my car,” said K-9 officer Josh Dobson, who testified that Lee ran directly in front of his police vehicle “brandishing” an object that Dobson later said was a gun. Dobson said he never saw Lee shoot at him, but ducked down in his car as several bullets “thudded” into his vehicle.

“I saw him running away, waving a gun and I fired,” said Dobson, noting that Lee was past him and running down the street away from him when the 19-year SPD veteran jumped out of the vehicle and fired his weapon several times.

“I had concern about other officers and civilians out there in the area,” said Dobson.

That statement in an otherwise short half-day preliminary hearing did nothing to calm Black Lives Matter Sacramento members in the courtroom.

BLM maintains Lee, who is Black, was left on the ground after being shot six times “to bleed out.” Activists said Lee wasn’t loaded into an ambulance for 30 minutes even though Lee’s father was called and told his son had died.

“Armani continues to be abused in jail, where he’s been in solitary confinement for months. Deputies have nicknamed him ‘9 lives Lee,'” said Tanya Faison, BLM organizer and part of about 20 courtroom supporters Friday.

“(Lee) has been physically assaulted by deputies numerous times while in the Sacramento County Jail. Deputies have also attempted to isolate him from others by abusing others when they interact with him,” alleges BLM.

But City of Sacramento police officers painted a different picture Friday, explaining Lee was wanted on a parole violation and involvement in an altercation about a week earlier where he was identified as the person who fired several shots into an apartment after he was thrown to the ground in a fight.

“Witnesses said Lee shot several rounds into an apartment,” testified officer Tim Stratman, who added that a resident of that unit said Lee blamed that resident for a friend being beaten up.”

That led to the Feb. 10 stakeout of Lee, and the chase down Del Paso Blvd.

The preliminary hearing will continue in Dept. 27 Monday at 9 a.m.