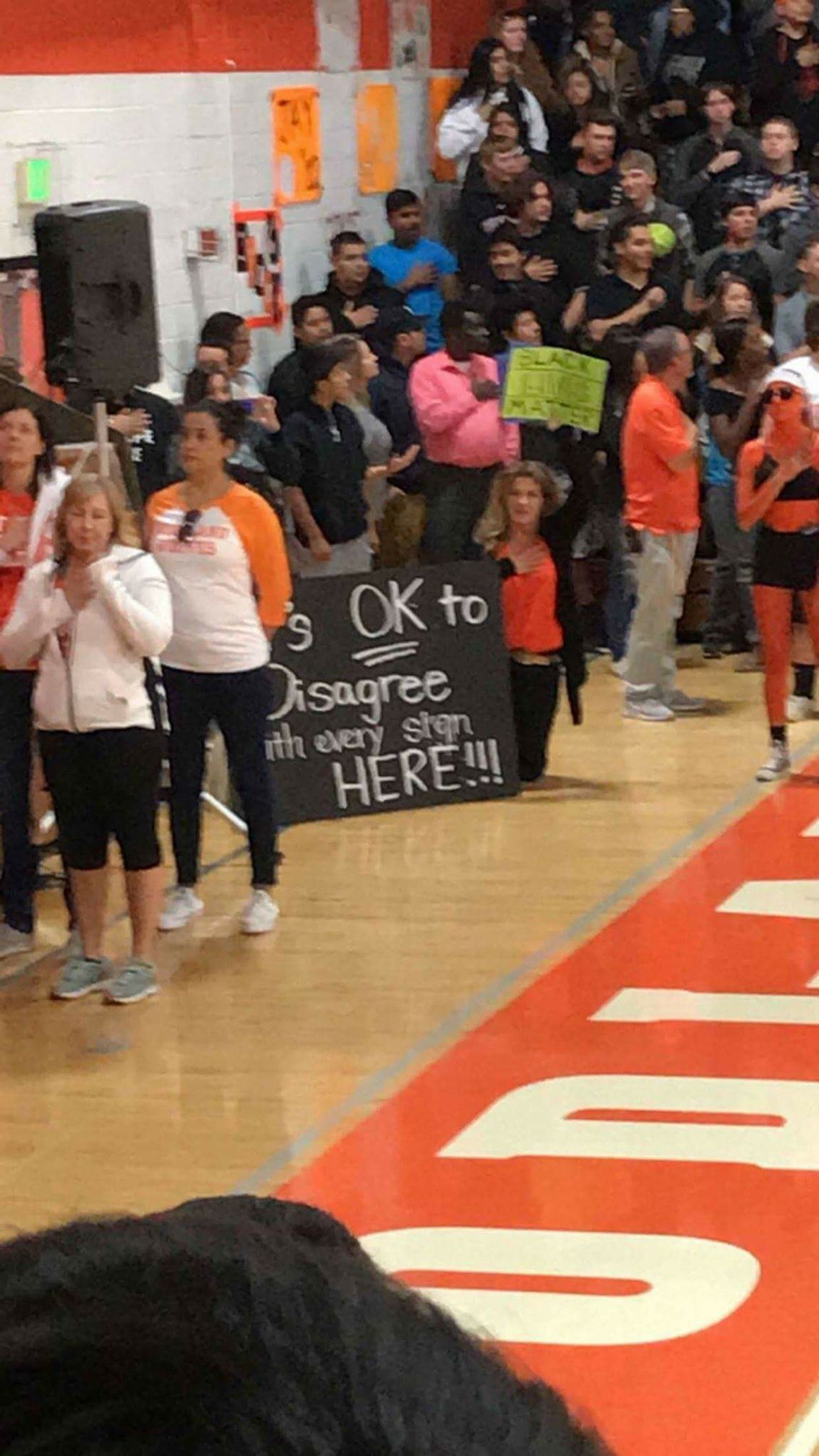 Last winter, the right complained, and I think largely rightly so, when events such as Milo Yiannopoulos were shut down by leftist protests on college campuses.  The complaint was that college campuses had become antithetical to the notion of free speech and protesters could shut down events simply by creating apparent safety risks.

However, any claims to being stalwarts for free speech have disappeared this fall as the issue has turned away from right-wing speakers on college campuses to protests during the national anthem at sporting events.

The incident at Woodland High last week just punctuates this debate.  The Vanguard on Monday published comments from the principal who informed parents, “While teachers do retain certain First Amendment rights in their capacity as an instructor, such rights are limited by Ed Code and caselaw. Their personal, political or religious beliefs are not appropriately expressed at school or in the classroom.”

Instead, they argue, the “legal instructional role is one of facilitator – one who facilitates student discussion and intelligent analysis of current events.”

At some point I wonder when we became such a nation of snowflakes, who melt any time a view is expressed that we don’t wholly back 100 percent.

Inevitably, someone pointed out in a comment on the Vanguard that I would not be happy if a teacher were pushing a pro-Trump line in class.  The reality is that I have been extremely consistent on this

point and I don’t believe I would have a problem with that.

When I was in school we had a number of teachers who were former marines in Vietnam and they had a much more conservative view than I did.  We had some interesting discussions, including over the need to salute the flag in class.  Instead of being indoctrinated, we had good and passionate discussions in class and it became a source for learning that there are a variety of different viewpoints out there.

We had interesting class discussions and debates over many current events.  I remember during some protracted labor negotiations and two near strikes for teachers, we had teachers who were union reps, and they would tell us what was going on.  It was certainly off-topic from the curriculum but we learned a lot.

My guess is that, these days, many of these discussions and off-topic rants (and the teachers often did not hold back) would be frowned upon – and, I think, to the detriment of learning.

The irony of it all is that Ms. Pappas was doing this at a school assembly.  She did not take up class time to do it.  She had a sign that was really a free-thinking sign: “It’s OK to disagree with every sign here.”  And of course, there was the most incendiary message, the hand-held “Black Lives Matter” sign, which I’m sure is what got her in the hot water.

Had the school simply ignored the signs and her silent protest, I wonder how many people would have even been aware of it.  They certainly were well within their rights to tell her not to do this again – but, by suspending her on the first offense, they did not present other ways forward that could be learning experiences for the teacher, her students and the community.

By disciplining her immediately through suspension, they made this far bigger than it ever needed to be.

As a 9th grade female student wrote: “As a student at Woodland High School it is damaging to see a well respected teacher torn down for simply expressing how the world works.”

She said, “High school is not just about learning Y=MX + B.  High school is a place where students should feel comfortable expressing and learning new opinions of the world.”

She said, “Today-October 13th 2017-not only my principal, but the entire Woodland School district let me down.  I feel I have missed a positive opportunity to learn.  By silencing the voice of this teacher, you silenced the voice of a whole community.

“If America is truly the land of the free, then why is this happening?”

The interesting thing is that, by requiring the national anthem, already the school district and other entities have injected politics into the discussion.  They have tilted the scales in one direction.

One commenter stated that “by playing the national anthem with the expectation that students and teachers will defer to some traditional stance with hand over heart is, by its very nature, injecting politics into a school setting. Even those teachers who ‘behaved appropriately’ were expressing a political statement. How then, is it justifiable to discipline a teacher who happens to not share the same political view of the masses?”

But another commenter responded, “I don’t see it as a political statement to show respect and love for your country by standing for its anthem.”

But what they are failing to see is that the way that people show love and respect for the country is being dictated by someone else.  I happen to believe that this nation stands for the right to freedom of speech, and that freedom of speech is pointless without the right to dissent and criticize the government.

After all, the most oppressive nation in the world is happy to allow its citizens to praise the government and express patriotism and love for the nation.  The real test of freedom is the ability to challenge that – to say things that the government opposes and express opinions that are considered by some dangerous and by others disrespectful.

Without that right, we have lost our freedom.  Therefore, for me the flag stands for the right to dissent and it is antithetical to our nation’s values not to allow people to express dissent.

Last winter, I lectured to many students about free speech.  It was difficult to get many to understand that the reason they needed to allow people like Milo to be able to speak and say things they consider hateful is that next time the shoe will be on the other foot.

At that time, the point I made is that the best way to respond to speech you don’t like is to ignore it, because it is only by publicizing it and trying to ban it that it has its biggest impact.  That is exactly what has happened here.

But many seem to fear that teachers will indoctrinate our students.  I have no such fear.

On Saturday, I had the pleasure of photographing the Yolo County Concilio award winners, including 14 county-wide high school students who are receiving scholarships to go to college.  The best part is listening to the students speak about the adversity they had to overcome to get to this point in their lives, as well as their list of accomplishments.

What you realize is that these kids are not snowflakes.  They have to overcome barriers – language, economic hardship, cultural differences – to get to this point.  These kids are not going to melt when they see a teacher expressing an opinion that they either agree or disagree with.

Kids are tough and resilient, and we don’t need to protect them from a diversity of opinions.

What we do need to do is protect their right to freedom of speech and freedom of dissent.  That is what this nation is built on and what makes us great.

25 thoughts on “Commentary: When Did We Become a Nation of Snowflakes?”