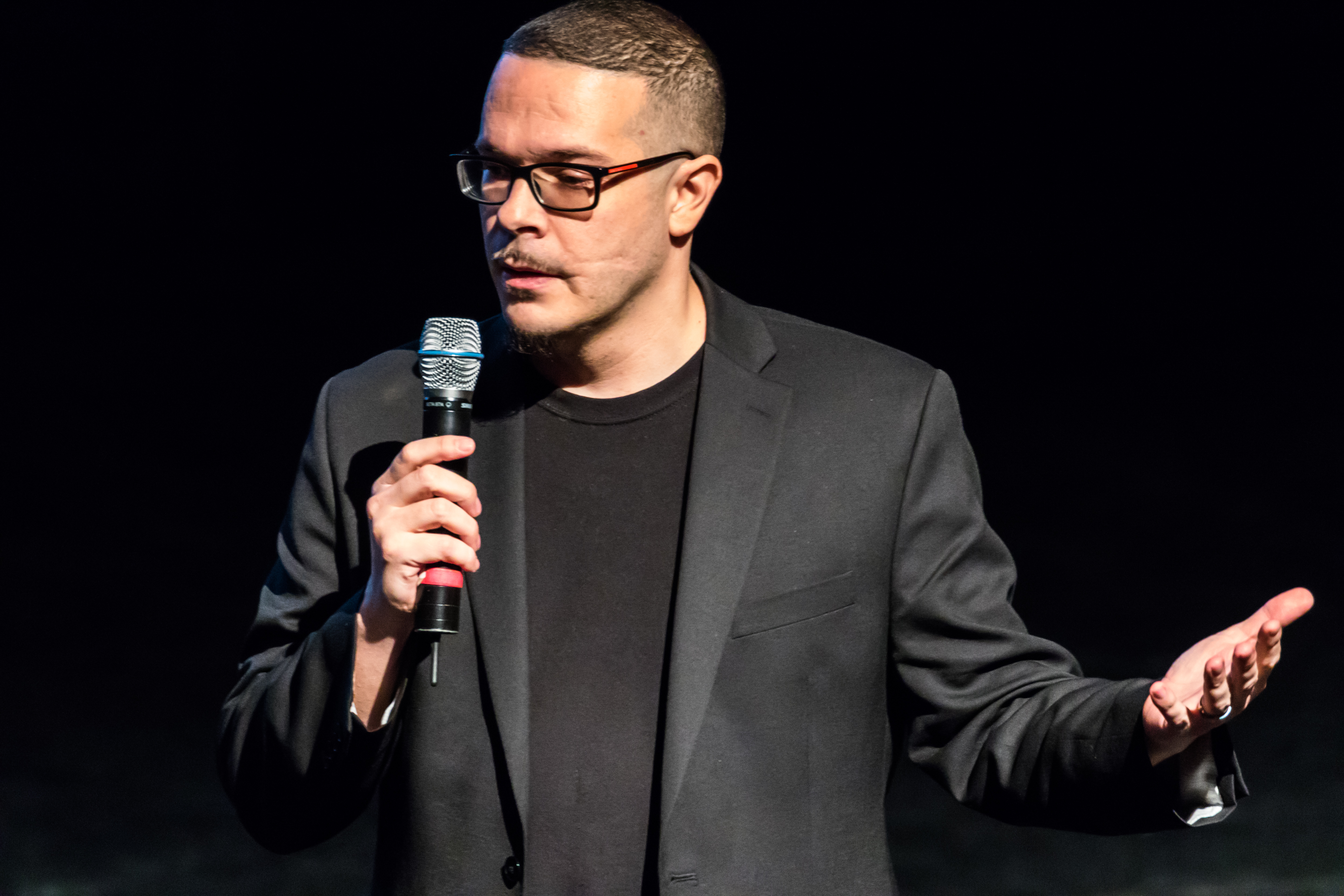 At Wright Hall last night, over 400 people, most of them UC Davis students, attended a talk by Shaun King, a columnist and writer for a number of publications including previously the New York Daily News and Daily Kos, and now the Intercept.

Mr. King rose to prominence writing about events following the killings of Eric Garner in New York and Michael Brown in Ferguson.

Shaun King explained that in August of 2014 he was sent a video of a man who was being confronted by the police, “when all of a sudden the man comes up behind him and starts choking him.”  King’s friend, describing the video, says the man’s choking out and he kept saying, “I can’t breathe.”

“He said the guy dies right there on the sidewalk,” he said.  “Naively I had the thought – I feel guilty now looking back – I had the thought my friend must have left something out because what he described for me is outrageous.”

He found out the man’s name was Eric Garner.  “His name was not yet trending.  The story was not yet on the news.  And I saw the video of him being choked to death right there on the ground – I was shook,” he said.  “I can’t explain the way it impacted me.”

He said he had protested police brutality before – but there had been no video of it.  He thought he had to do something about it and he decided that he was going to share this video on Facebook with his friends.

“This is naïve – I thought if people would see this video, they would respond like I did,” he said.  “Something is going to be done about it.”

People started protesting, and in the midst of protesting the death of Eric Garner, Michael Brown was shot and killed in Ferguson.

Mr. King said, “Mike Brown has been criminalized over the years – I have to remind people, he was an unarmed kid.”  He said, “They have made him out to be something that he wasn’t.  He had no criminal record.”

He said, “People were boiling not just with anger, but pain.  It wasn’t just a protest – it was grief and it was palpable.”  He added,  “The rage started to grow – you could just feel it.

“This isn’t every two to three weeks, it looks like two to three days,” he said, “It was every few hours.  One thousand and 1100 people a year being shot and killed by police.”

He said he learned “that fighting for justice meant much more than making people aware of injustice.”  He learned, “Awareness of police brutality does not create change all by itself.

“If we fight like this we’ll get justice,” he said.  “I realized that we built a lot of assumptions in this country on lies.” 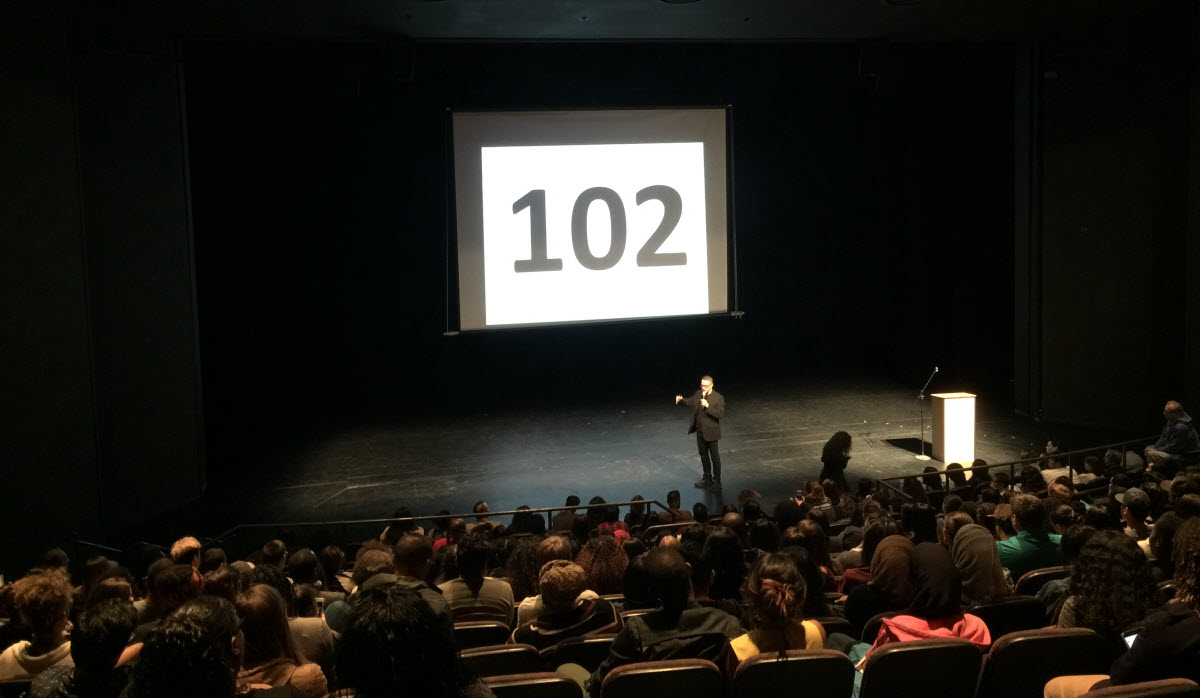 Shaun King later on his slide show posted a slide with “102” on it.  He explained, “That’s how many unarmed black men, women, children were shot and killed by American police last year.

“You have to go back to 1902 (after) William McKinley (was assassinated) to find the last year where 102 or more African Americans were lynched,” he said.  “A lynching is when someone serves as judge, jury, and executioner.”

He said he spoke to a recent crowd, asking “can anyone in the audience name three people who’ve been killed by American police this year?  Nobody,” he said.  Most couldn’t even name one person.  “Nine hundred people have been killed already, how many can name just one?”  They couldn’t.

“Not because the police have stopped killing folk, but because Donald Trump has sucked all of the air out of the news cycle, it doesn’t even get mentioned anymore.” 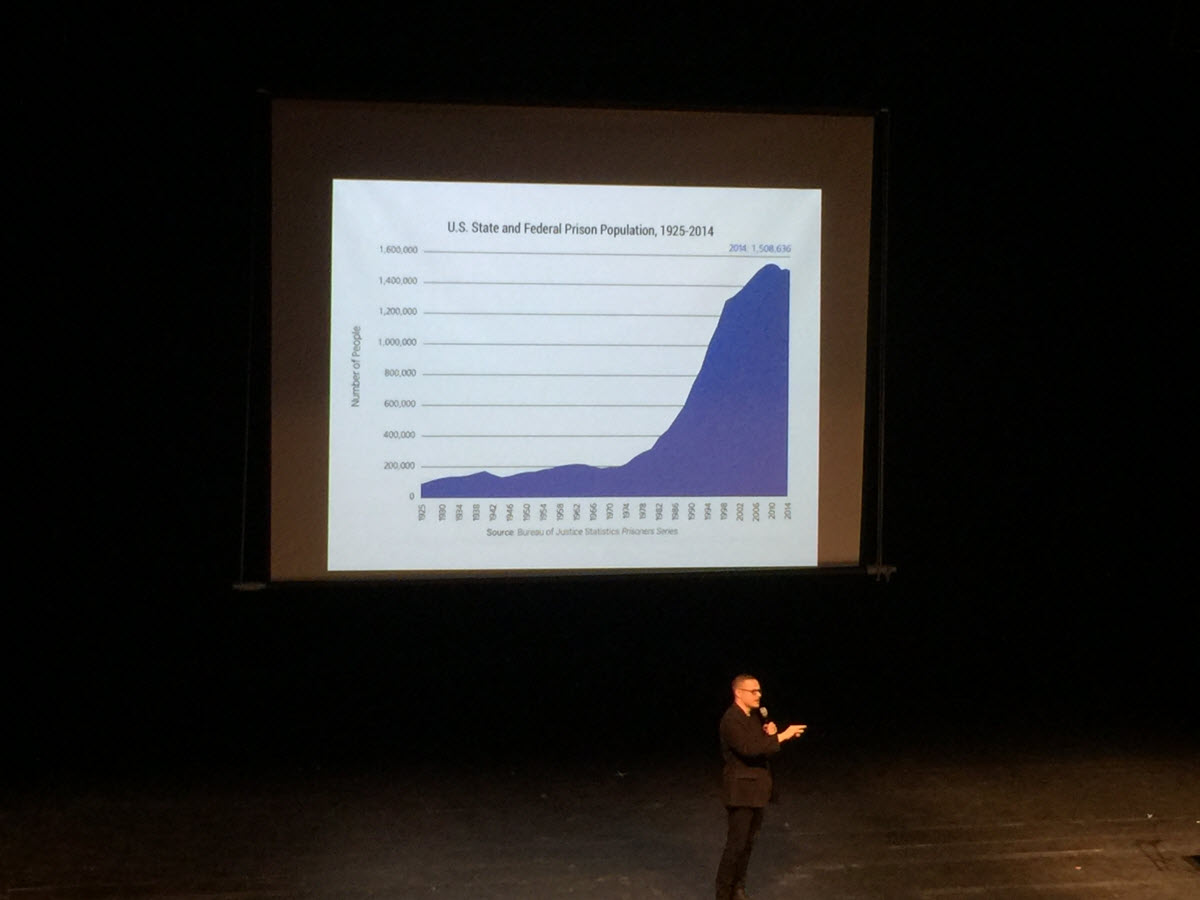 He suggested that the audience read The New Jim Crow by Michelle Alexander.  The chart stops at 1925, “for all of American history, our state and federal prison population was fairly constant.

“Right here, something crazy happens,” he said pointing to where the prison population explodes.  “It wasn’t an accident.”

Mr. King said, “I used to say that the system is broken.”  He came to the conclusion that he was wrong, “The system is not broken – what you learn from the New Jim Crow is that that was where the system was broken, it was corrected and it reverted to the mean.  This is on purpose.”

He said, “A broken system suggests it was well-designed and well-intentioned and now it’s kind of messed up a little bit.  No, actually this is a system that is operating exactly as it was designed

and built to function.”

He cited a Washington Post black-white drug study that took place from 1980 to 2010 and what it showed is that over those 30 years, African Americans used drugs at about the same rate as white people.

“This isn’t an accident, it’s on purpose,” he said. 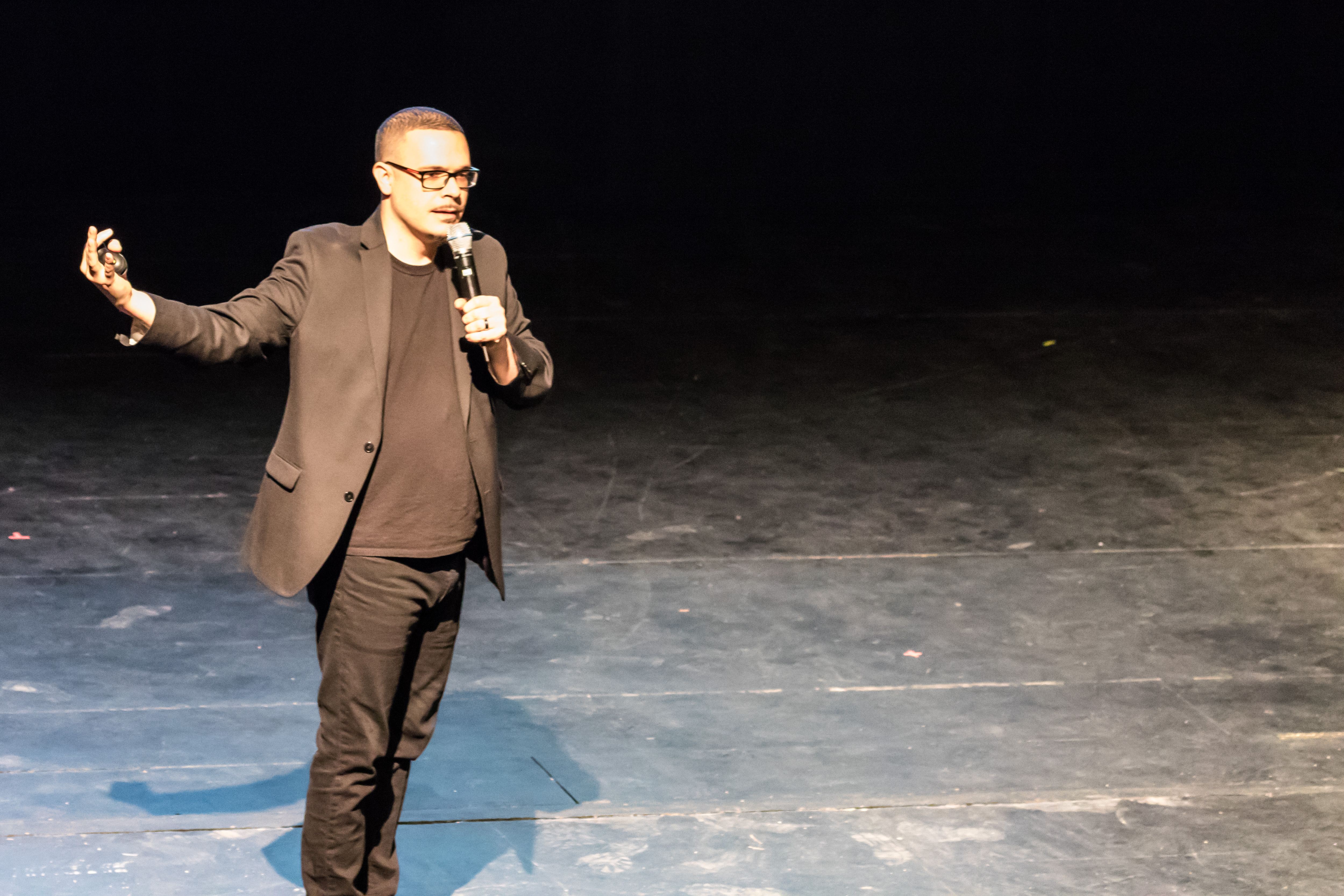 He said, “The United States has the highest rate of imprisonment in the world.”  In fact, it is not just now, but it is in the history of the world, we incarcerate people at a higher rate than anywhere else.

Later Shaun King responded to a question and said that he didn’t think law enforcement can be fixed.  “It’s not a few tinkers away,” he said.  “America has lost its will for radical shifts and changes in policy.”

Some people argue for the abolishment of prisons.  He doesn’t agree.  He said, “We definitely need to reimagine prisons.”  He said, “Our jails and prisons are awful.”

He said he lived in Irvine, California, for a year.  He said that Irvine was listed as the safest city in America.  “I was in Irvine for almost two months before I saw my first police officer,” he said.

“I had a realization.  This is the safest city America with virtually no police.  That this community was safe not because it had thousands of police.  It was safe because it had great schools, great health care, hospitals, it had almost zero percent unemployment, it had high average income.  It was safe because that community had defined for itself that safety is something different.”

The safest cities in America, he said, “were not safe because they had huge police forces.”