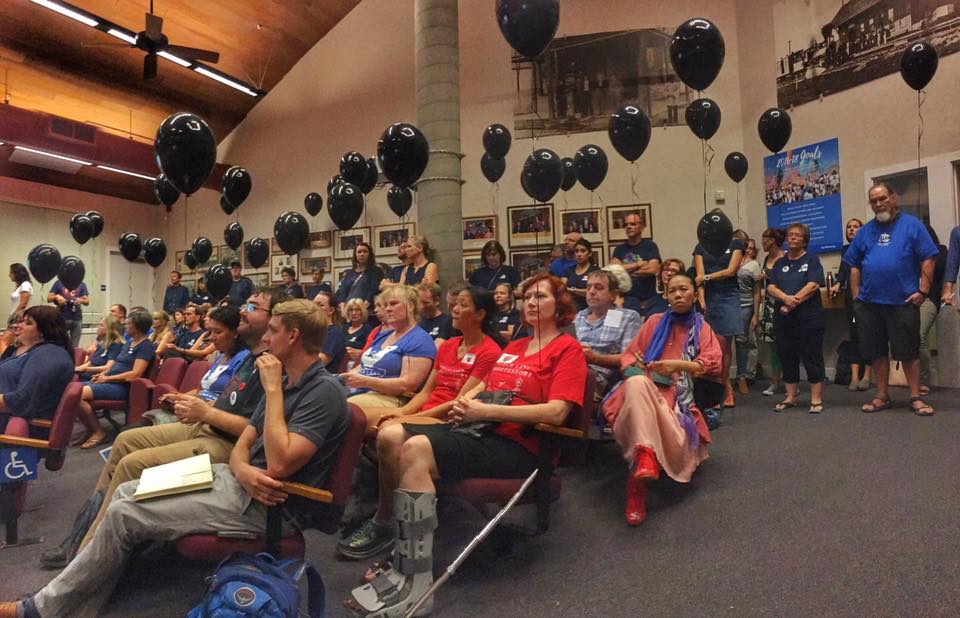 The stories of the struggles of teachers are heartbreaking for anyone who listens.

A bright young teacher is getting married early so she can get on her fiance’s health care plan from the Sacramento School District. Another single mother with a 12-year-old has had to take an outside health care plan with a $6000 deductible because it’s the only plan she can afford on her salary.

And a bright young teacher is getting a master’s at home as he teaches a full day and gets $1000 a month from his parents just to make ends meet.

I am particularly frustrated right now because this problem was solvable a year ago.  While I did not know the depths of the compensation problem at the time, the math coming out of the parcel tax talk did not add up.

Here we were, with the district professing we were at an average funding level and yet were providing above average services.  It didn’t add up then.  To his credit, Alan Fernandes was encouraging the

school board to think big and go up to a $960 parcel tax.  The Vanguard supported that idea.  But the board majority did not want to risk it.

I have no doubt that the district would have had to have done a real campaign – organize on the precinct level and put real money into the effort – but I also have little doubt that they would have prevailed.  Instead, they took the safe way out and passed a much lower parcel tax that does not provide the district with the money it needs to remain competitive.

There is also a cost to implement those changes.  The district only has so much staffing and personnel to explore and put into motion those changes.

There are factors involved in incremental change: (1) the amount of the expected savings, (2) the work needed to produce that change; (3) the impact of the change on the effectiveness of the educational program; and (4) the downside risks and the opportunity costs.

In the end I believe that we have to look at the big ticket items.  One of the biggest areas of additional spending is on the seventh period at the high schools and junior highs.

I looked at the research on the advantages of seventh-period days and found it’s much more mixed and more modest than expected.  The research has found only “limited evidence” that any particular scheduling model has a great impact on student learning than any other.

Studies have founds limited evidence that the seven-period day is any more appropriate for students, or improves instruction any better, than any other scheduling model (Hackmann, Hecht, Harmston, Plisa, Ziomek, 2001).

A study from Washington state found modest gains in reading, writing and math on an assessment test for students in a seven-period block and modified block schedule compared to other models (Baker, Joireman, Clay & Abbott, 2006).

However, those researchers caution that many other factors contribute to student success and suggest that “what really matters . . . is that schools select a schedule that meets their particular needs and that schools provide professional development to support” the model.

With that said, Davis parents, many of whom live in a town that they cannot afford in order to enable their children to attend these schools, are unlikely to support a reduction in the educational choices their children receive – and therefore I would not expect parents will support the district cutting back on classes.

That leaves a potential parcel tax expansion such as the one suggested a year ago.

With all of that being said, I think the district needs to take a measured approach between now and January.  That does not leave a lot of time, but if they wish to put a parcel tax on the ballot they need to decide between June 2018 and November 2018.

The first question will be to determine how much they need.  And I have yet to see an official district analysis of the pay situation.  As I suggested in my response yesterday, this seems like a very large change, however, when you consider both the need for salary increase as well as medical benefit improvement.

On the salary side, anecdotally it is difficult to know how much is accurate, but one of the teachers indicated he gets $2400 take home each month, slightly above the entry level pay.  He said that if he worked at West Sacramento’s school district, he would take home $600 more – that represents about a 25 percent increase in take home pay.  That is rather substantial.

We also understand that the health care benefits are subpar, with the teacher getting married early to get on her husband’s benefits from the Sacramento School District and another employee using outside coverage with a $6000 deductible to avoid the high cost of the current district plan.

While we believe that the bulk of the money is going to have to come from either a parcel tax increase or major programmatic cuts, it probably is still beneficial to see how far one can get by making marginal changes to improve efficiency.

The problem right now is time – we are already into October.  In order to increase next year’s salaries, they would have to put something on the ballot for June, and who knows how feasible it will be to tie that to a contract improvement.

One thing is clear – the district has to act and act quickly or risk undermining community support.

76 thoughts on “Sunday Commentary: The Problem with Teacher Compensation is Severe, the Options Are Limited”